For dogs like Twister, an eight-year-old male pit bull, having multiple foster caregivers supporting him throughout his journey to adoption made a life-changing difference.

Rescued by the NYPD and ASPCA in October 2021, Twister’s first foster caregiver supported him for several weeks until his next foster, Hannah N., took over from late April 2022 to mid-June. When Hannah’s travel schedule interfered, yet another foster, Mark D., stepped in to help in late June and most of July. Hannah also cared for Twister during brief periods in July and August.

“Instead of returning Twister to the ASPCA, where he was stressed inside the shelter, Hannah and I traded back and forth to keep him in our care,” says Mark, a first-time foster.

“Hannah and Mark took it upon themselves to discuss their schedules and plan foster swaps accordingly—all while keeping us updated,” says Eileen Hanavan, Director of Volunteer and Foster Engagement. “We’re grateful to them and to all our fosters—their incredible support enriches the experiences of the animals in our care, and we couldn’t do our work without them.”

Twister’s past was far from the loving care he received in his foster homes.

Twister was one of several dogs brought by the NYPD to the ASPCA on October 11, 2021, after they were discovered living in unsanitary conditions and confined in wire kennels for prolonged periods without food, bedding or water. Twister’s kennel was wedged underneath another kennel.

Twister, bottom left, in the room where he was discovered.

“He weighed just 41 lb. and had an emaciated body condition score of one on the Purina Body Condition System of one to nine (a veterinary system uses to assess a pet’s weight), one being the thinnest score,” says Dr. Liu. “He also had many skin issues related to living in an unsanitary environment. His foul-smelling hair coat was matted with urine and feces and his underside and paws were inflamed—the result of lying in waste for long periods. He had painful ulcers on the undersides of both hind paws and his scrotum. Along the top of his right hip was a circular red skin lesion, consistent with an early or healing pressure sore.” 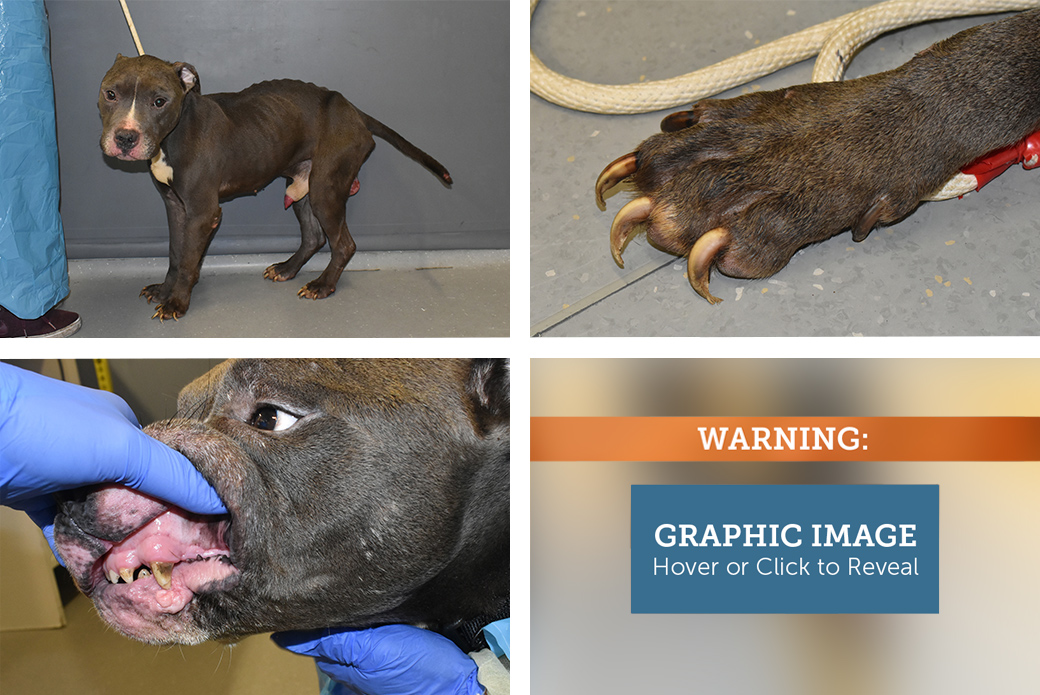 Twister also had overgrown nails and a skin wound on the tip of his tail, trauma resulting from hitting his tail against his kennel’s hard surface. Dr. Liu says he was also dehydrated, as evidenced by his tacky—sticky, less moist—gums. His two upper canines—large, fang-like teeth—were fractured.

Before being admitted to the ASPCA Adoption Center, veterinarians at the ASPCA Animal Hospital (AAH) performed an endoscopy to remove foreign objects from Twister’s stomach, including pieces of corn cob, a pill bottle cap, and part of a plastic hanger. He was also neutered. 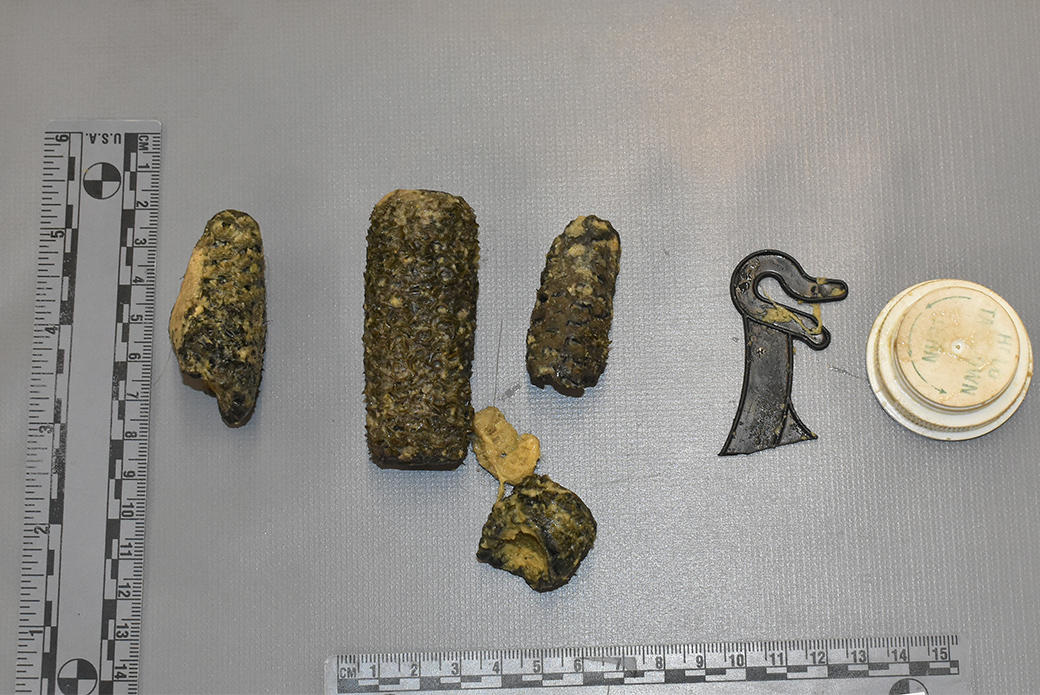 “Twister is an example of how improper housing and poor husbandry in an unsanitary environment can severely affect an animal, including causing painful medical issues,” says Dr. Liu. “He wasn’t getting even basic necessary care.”

A week after his arrival at the ASPCA, Twister was transferred to the ASPCA Canine Annex for Recovery and Enrichment (CARE), where his treatment continued.

“Twister loved his caregivers, his walks, his toys and his playtime,” says Dr. Sarah Mantovani, Medical Supervisor at CARE. “But more than anything, he loved food.” 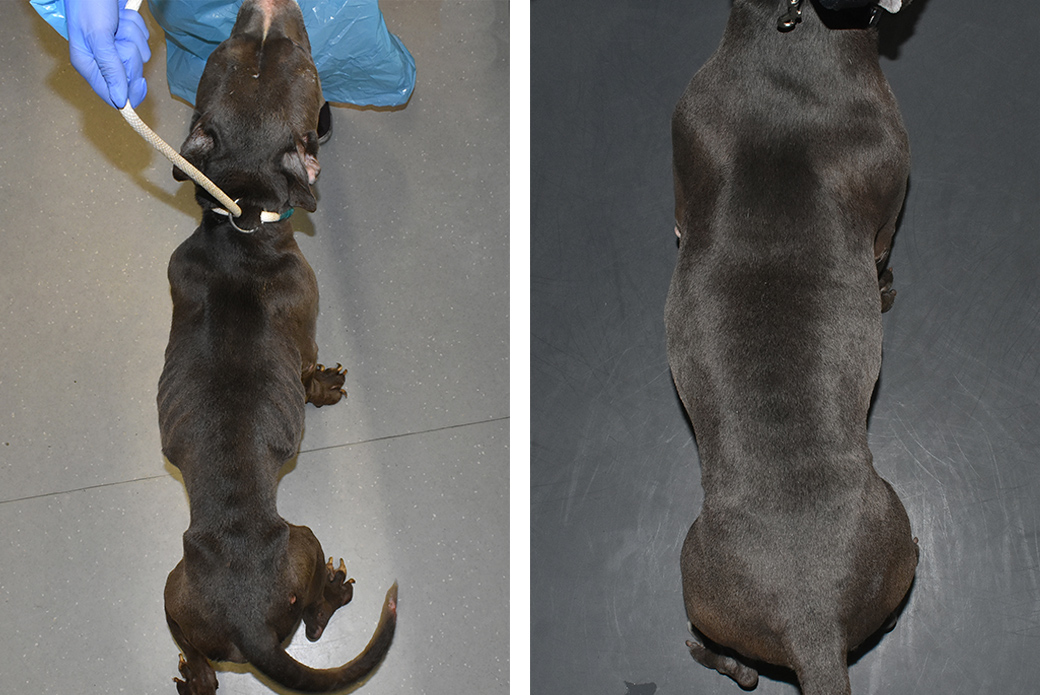 Twister’s love of food was no surprise given he was so underweight, and it came in handy when he needed medication or bathing, according to Dr. Mantovani.

“Because of his skin condition, Twister needed frequent baths, and with a little spray cheese on the wall for him to lick, Twister didn’t mind bath time one bit,” she says.

On February 1, Twister underwent bilateral entropion surgery at the AAH to correct abnormal, inward-turned eyelids that were causing corneal irritation. He also was diagnosed with keratoconjunctivitis—also known as dry eye—a condition where he can’t produce enough tears to lubricate his eyes. Untreated dry eye can lead to infection, scarring, ulcers and blindness. Twister received an ointment for both eyes to increase tear production and responded well. 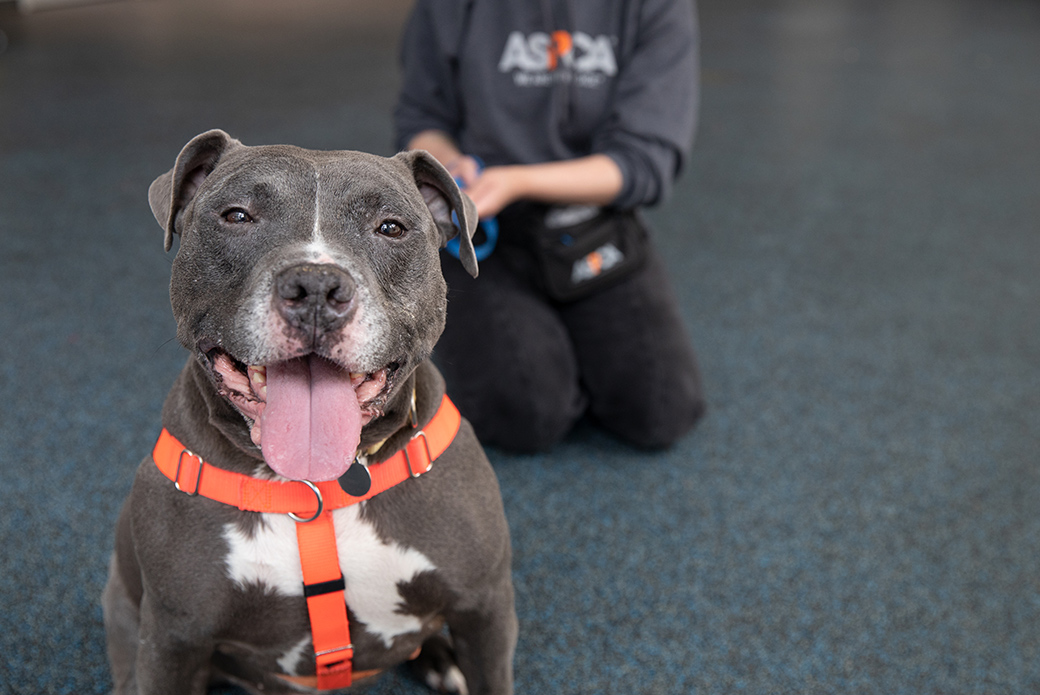 “As soon as you meet Twister, you can’t help but fall in love with him,” says Dr. Mantovani.  “But we needed fosters who could care for a large dog with multiple medical issues who needed attention several times a day. These things can make finding a foster caregiver more difficult.

“Spending time in a home is the best recipe for healing,” she adds. “It helps animals eat better, receive medications more consistently and lower their stress.”

A Foster Finds His Fortune

Marc R. has been an ASPCA volunteer since 1996, walking dogs and counseling would-be adopters. He met his first dog, Samson, a shepherd mix, while volunteering at the ASPCA.

After Samson died at age 14, Marc adopted another ASPCA dog, Tiger, who has also since passed away. 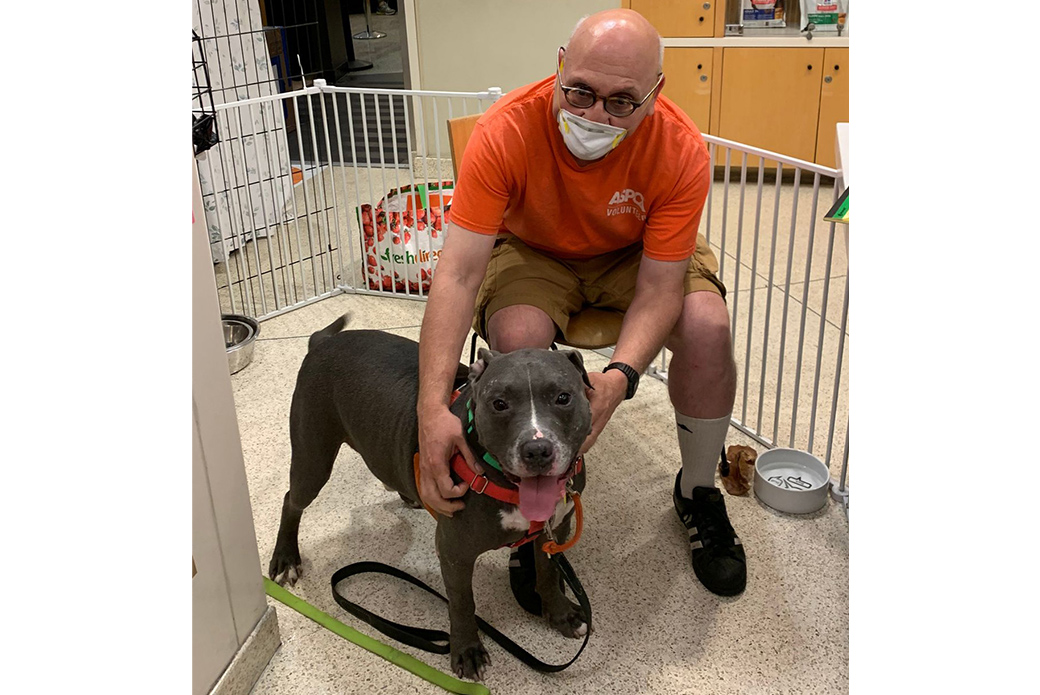 After the pandemic, the ASPCA started a “Dog Day Out” program for short-term foster opportunities for volunteers, and Marc took Twister home for an afternoon and two overnights. He also walked Twister many times.

“By then I was looking to adopt,” says Marc, who checked in with Hannah, Twister’s then-foster. “She gave me insight into Twister’s temperament and whether he’d be a good fit for my lifestyle. Twister and I got to know each other, which made the transition easier.”

The Road to Love and Safety 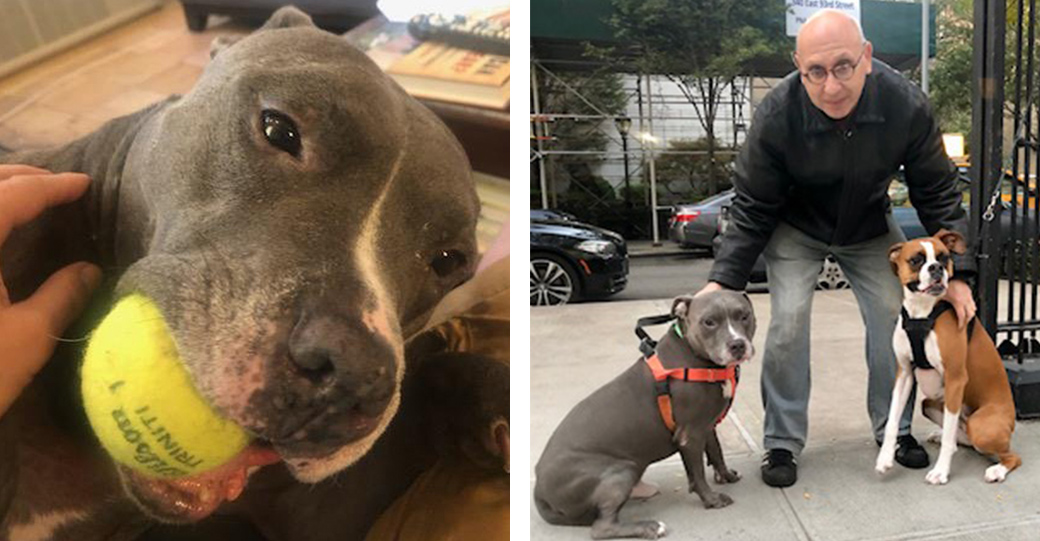 Although Twister requires lifelong eye medication twice daily, that need hasn’t stopped him from enthusiastically meeting most of the dogs in Marc’s building, including a Boxer named Penelope.

Marc understands that connecting with Twister required trust on each of their parts.

“I think we both made the right choice,” Marc says. 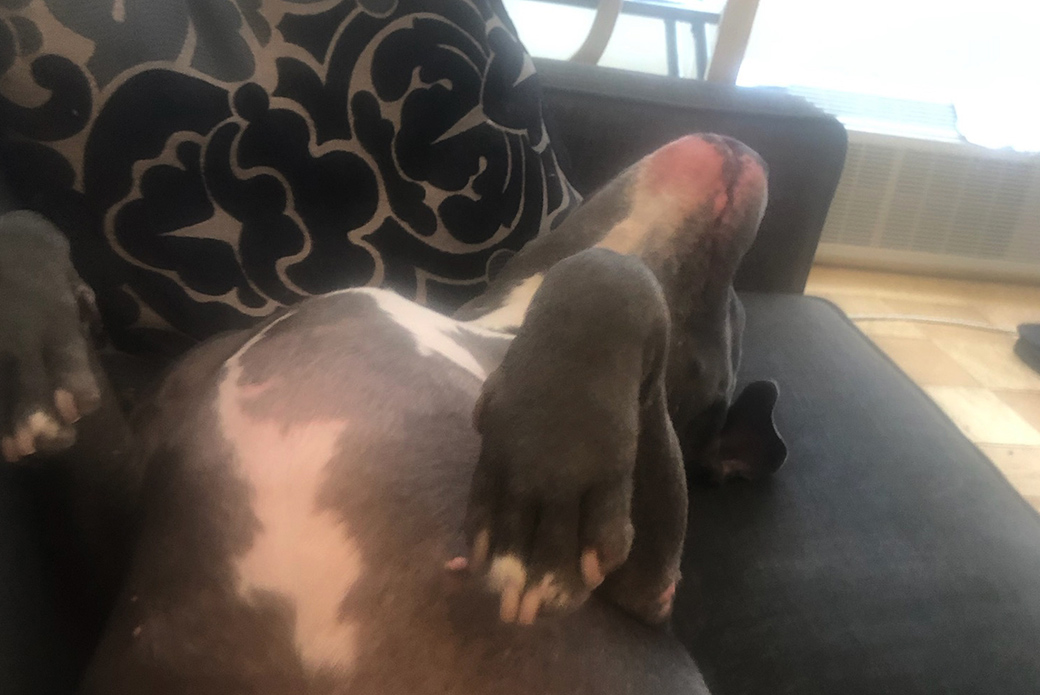 The ASPCA in New York City is urgently looking for foster caregivers who will take in large dogs. You can help change the course of a dog’s life by signing up to become a foster caregiver today! You can also sign up to foster a dog in Asheville, North Carolina, Columbus, Ohio or your local shelter!