Saylor Weathers the Storm and Finds Her Safe Haven

In September 2017, Hurricane Irma came barreling toward the United States. In an effort to evacuate all displaced pets and animals from shelters in the path of the storm, the ASPCA deployed in South Carolina, Florida and Georgia.

Due to the size of the storm, the ASPCA National Field Response (NFR) team worked in conjunction with the ASPCA Relocation team to transport animals from evacuated shelters to safe partner shelters where they could eventually be adopted.

Among those deployed was Michele Lago, ASPCA Operations Manager for the Relocation team, who drove from her home in North Carolina to Duncan, South Carolina, to the 40,000 square foot emergency mega-shelter set up by the NFR team for this response. 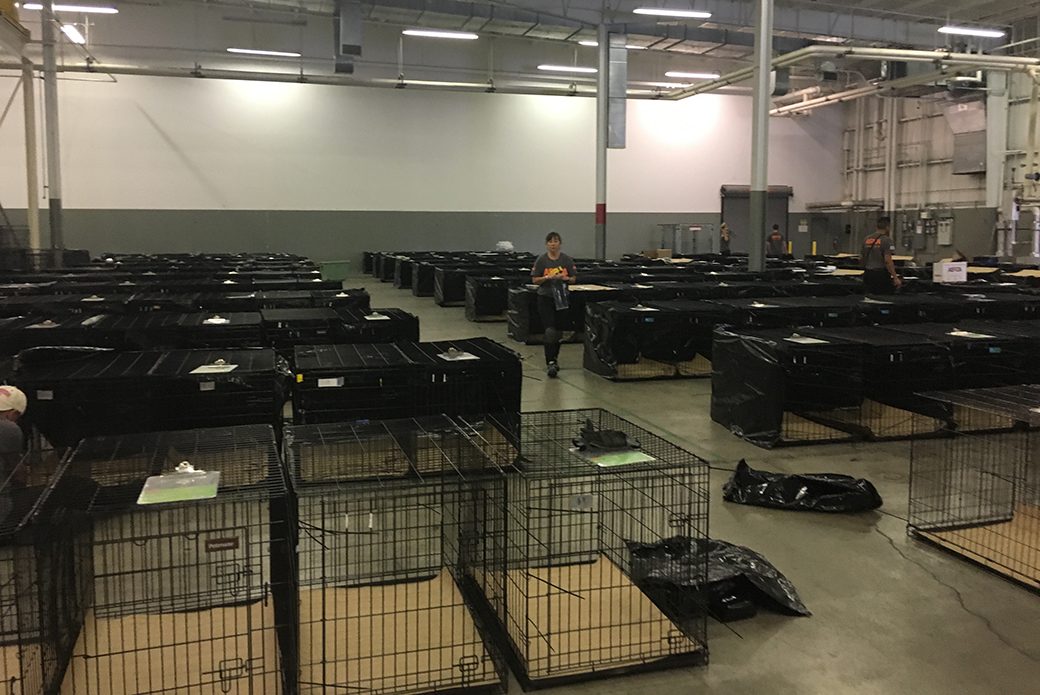 While at the emergency shelter, Michele took over the role as on-site Relocation Manager, in which she set up lists organizing which animals would go to which of our partner shelters.

“There were so many cats and kittens. I am, like, the cat lady of Relocation, I love cats more than any beings on this planet. So, I would walk through [the kennels] and that would be my happy, Zen moment.” Michele recalls.

On September 13, while walking through the temp shelter, Michele came across a very vocal five-month-old kitten named Saylor. 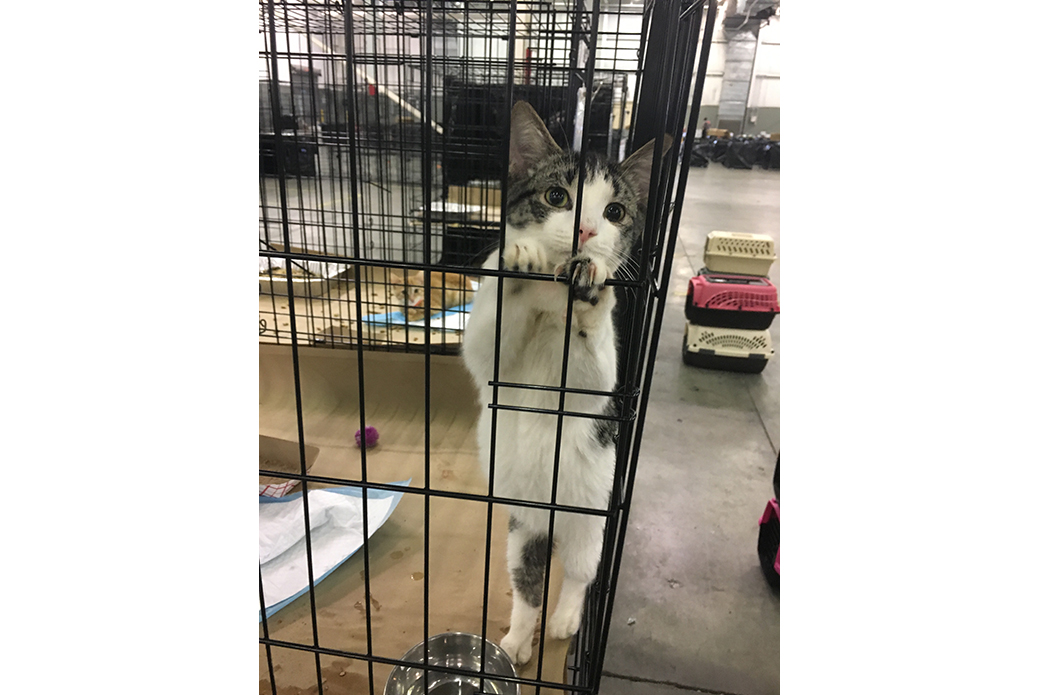 “She made herself known, came to the front of the kennel door, which not many cats do in a stressful situation, and I opened the door so I could pet her. She literally jumped out and landed on my shoulder,” Michele tells us. “And it’s not like she was trying to go anywhere, she just wanted to land on my shoulder so I could pet her and she could give me some love. At that moment, I knew she was mine. It was like she chose me. Like I walked by and she said, ‘that is my mom.’”

Saylor was evacuated from a costal shelter in South Carolina and brought to the emergency shelter for transport. Though Michele instantly fell in love with Saylor, she already had two cats at home, Paxton and Atticus, who she had to think of as well.

“Paxton and Atticus don’t love each other and barely tolerate each other. I wanted to make sure [adopting Saylor] was the right decision for everyone.” 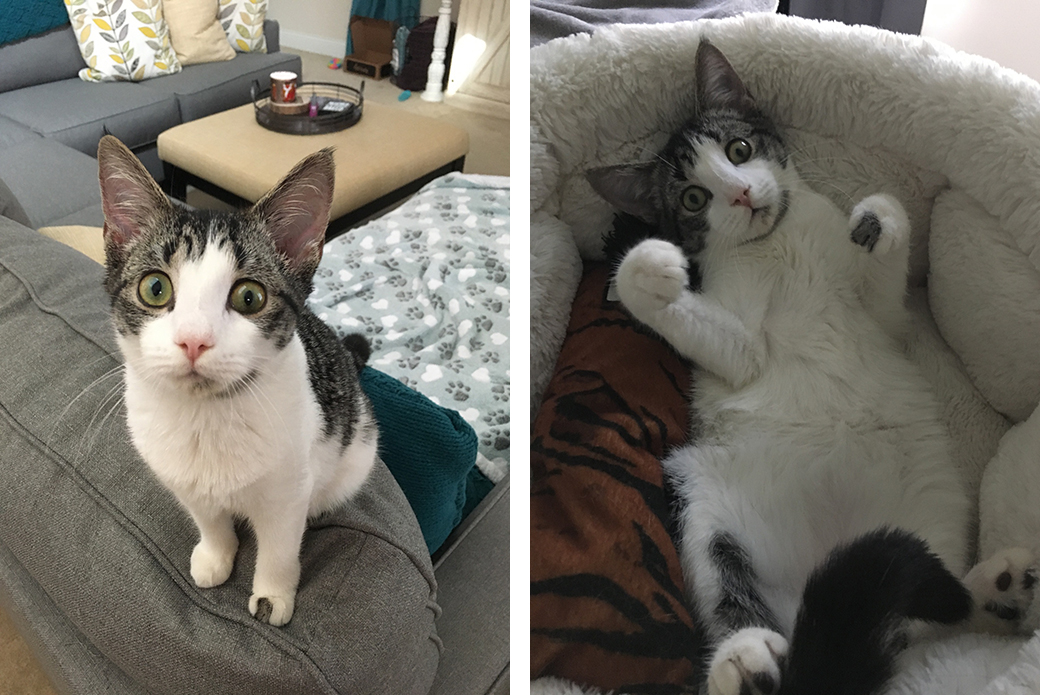 While still deciding whether adopting Saylor was the right choice for her fur family, Michele transported Saylor along with a few other cats to a university in Tennessee, where their veterinary program had offered to help care for and foster the animals.

At the university, Michele met a student working there and told them that she was “95% sure” she was going to take Saylor home, but just had to be sure she was making the right decision. 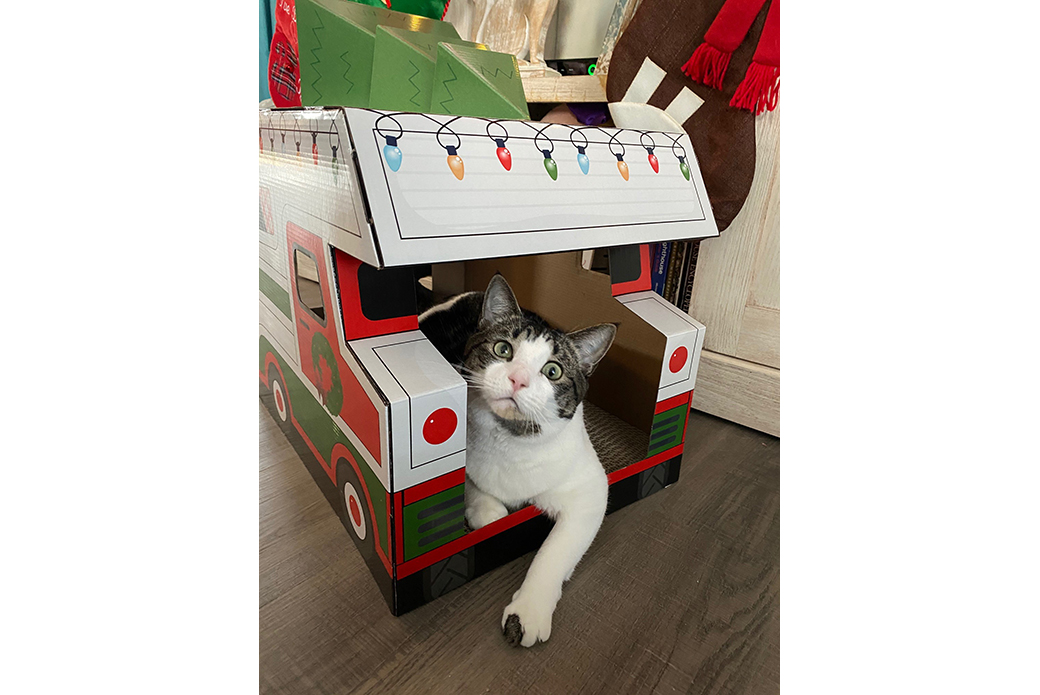 After Michele left, Saylor received medical testing and vaccinations and the gracious student sent photos and videos to Michele every day.

Michele took the next few days to talk to family and friends about bringing a third cat into the mix, and after about five days, she decided that she loved Saylor so much and was hoping that her social personality would be the bridge Paxton and Atticus needed. Michele took another transport of animals over to the university and when she got there, made the adoption official. 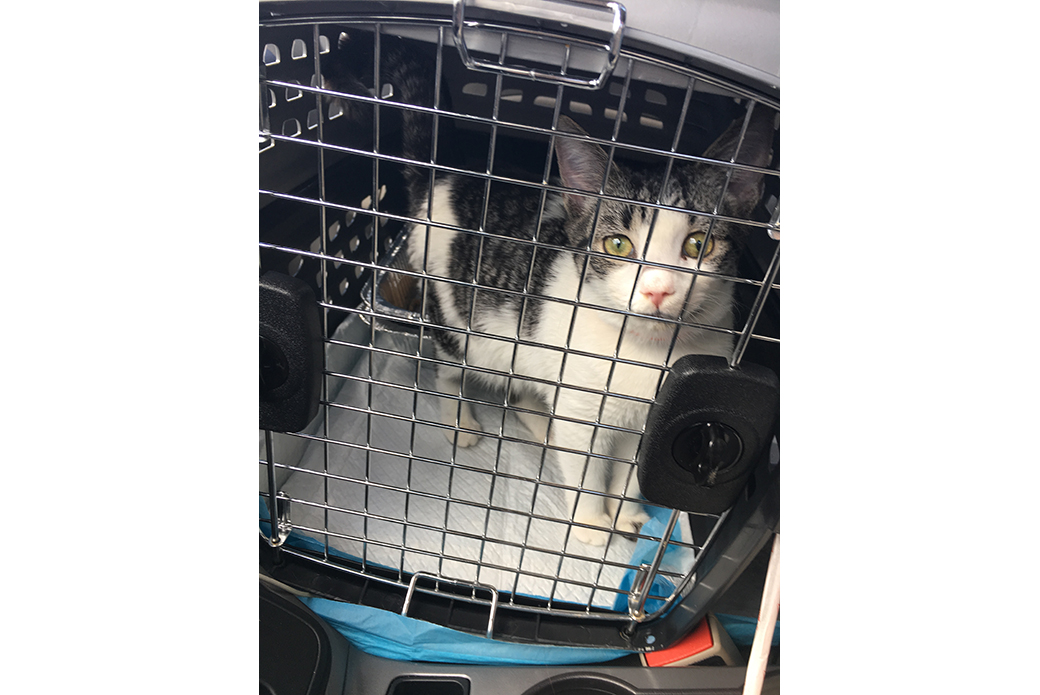 Within three days of bringing Saylor home, she was running around with Paxton and Atticus, creating that bridge that Michele had hoped for.

“Saylor became a buffer and made the household function better overall. She snuggles with Paxton and plays with Atticus,” Michele tells us.

Not only did Saylor bring joy to the resident kitties, but she became a bright spot in Michele’s life as well.

“She will always make me smile and laugh. She works with me, cuddles with me, sleeps with me and is always by my side. She’s a special kitten.”

Michele adds that Saylor is also “the toddler I never had.” Saylor will even reach her arms up and ask to be picked up, just like a toddler would. In fact, Michele has had to do laundry and the dishes while holding the loving cat. In hindsight, Michele realizes that Saylor’s wanting to be held is not all that different from when she first met her, and Saylor leapt onto her shoulder.

Aside from her child-like behavior, Saylor is quite the easygoing kitty. She doesn’t mind loud sounds; watching the lawnmower go by from the window and even enjoying being vacuumed. Cutest of all, though, is Saylor likes to bring Michele shoes and slippers. She picks them up in one room and will carry them over to Michele and drop them at her feet. 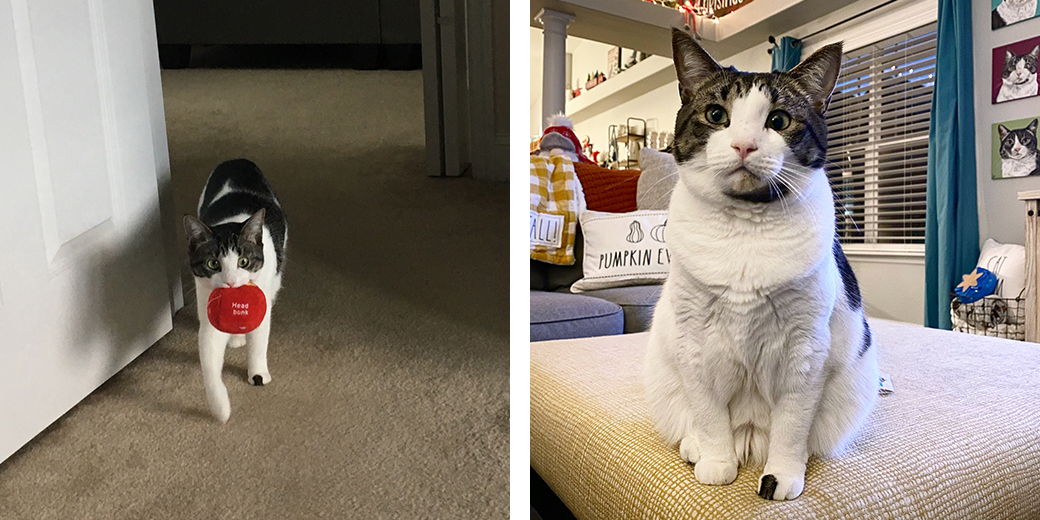 “She’s my ride or die daily partner. Wherever I am, she is—even sits on the bathmat when I’m in the shower.”

“Make sure you’re ready for the lifelong commitment and then go to your shelter and spend some time with the cats. I don’t think everyone’s Saylor is going to be the cat screaming from the front of their kennel, being really social. I think some of the most adoptable cats are the ones sitting in the back of their kennel hiding because the shelter environment can be a scary place. But the one thing they all have in common is they’re looking for a family to love and I guarantee they will give you the unconditional love back that I found with Saylor.”

“One of my favorite quotes from an old mentor is ‘just because it’s a disaster out there doesn’t mean it’s a disaster in here.’ And that holds true for Saylor. Her whole world was crumbling around her, going from shelter to shelter, not knowing where she was going to land, and she ended up coming home to a place where she will be loved forever and cherished every single day.” 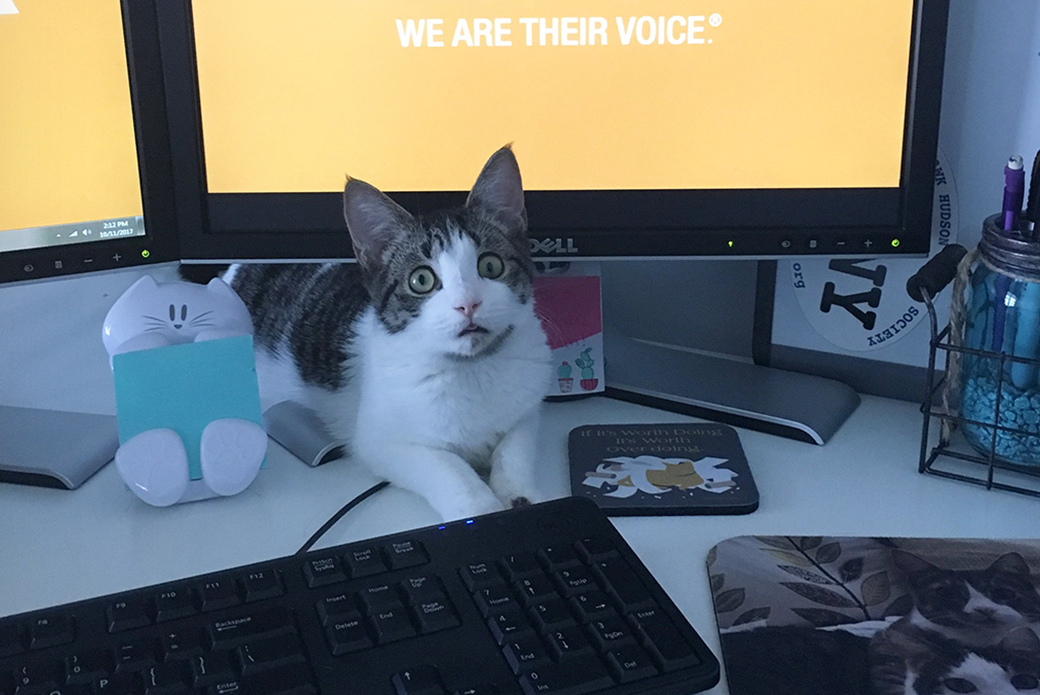 Create your own “Happy Tail” like Saylor and Michele’s by visiting your local shelter or check out the ASPCA adoptable pets! Want to volunteer for the ASPCA National Field Response team? Learn more here!