Rocco to the Rescue

“That was the day I became obsessed with cats,” says Julie, who was just five years old at the time. “My obsession only grew stronger as I got older.”

Soon it was Julie who was bringing vulnerable kitties home, leaving dishes of food out on the back porch of her family’s Long Island home and frequently visiting local animal shelters to check out available cats and kittens.

From Admirer to Advocate

Julie’s love of animals, especially cats, inspired her do more for them, and in 2017 she started volunteering at the ASPCA Adoption Center.

Three months into her role, Julie met a gray-and-white kitten named Irving. Found as a stray, Irving was treated at the ASPCA Animal Hospital for a severe upper respiratory infection. Thankfully, he recuperated in a foster home until he was healthy enough to move to the Adoption Center and meet Julie.

“He was shy at first, but after some hesitation, he walked right over to me, purring the whole time,” she says. “Then he sprung onto my lap. At that point, I knew I had to take him home.”

Julie sent a video of Irving to her husband, Terry. Both were still mourning the loss of their 19-year-old cat Mia, a grey-and-white tuxedo whom they had found in 1997. Mia even made two transatlantic crossings on the Queen Mary 2 with Julie and Terry when they moved to England for seven years.

“After Mia’s passing, we were going to give ourselves time to grieve,” says Julie. But after meeting Irving, she and Terry decided it was time to adopt again.

“Volunteers and fosters really get an intimate view of the animals in our care which often times results in falling in love with and adopting a new pet,” says Julie Sonenberg, Senior Manager of Volunteer Administration. “We’re so happy when volunteers make their own matches!” 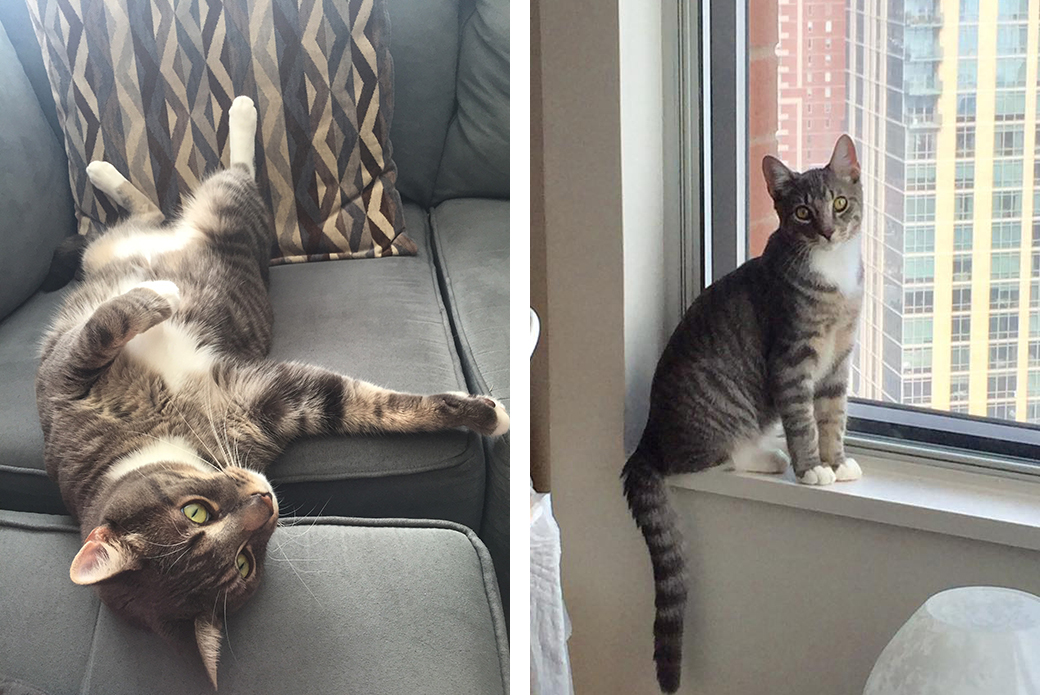 A Sense for Danger

Julie and Terry renamed their three-month-old rescue Rocco, inspired by the Church of Saint Rocco on Long Island, New York, where they were married. Soon after, it was Rocco who started performing rescues.

Around Christmas 2018, shortly after renovating their apartment, Julie and Terry were alerted to what could have been a catastrophic fire.

“Rocco was excitedly sniffing an electrical outlet in our dining room,” explains Julie. “I tried shooing him away, but he kept coming back. I put my ear to the wall and touched the outlet, which was very hot. I also heard a faint buzzing sound. Immediately, I called an electrician. Turns out there was an electrical short in the wall and the wiring was faulty.”

The electrician acknowledged that the intuitive feline had helped prevent what could have been a dangerous electrical fire—potentially saving his adopters’ lives.

In another incident, Julie, while fostering two kittens, heard Rocco let out a howl.

“It was a sound I’d never heard him make,” says Julie, who came out of the bedroom to see what was happening. One of their foster kittens had chewed a toy ball covered with string which had begun to unravel in his mouth and quickly turned from a fun game to a life-threatening hazard.

“I was able to get it away from him just before he swallowed it,” says Julie, who is convinced that Rocco was trying to prevent another disaster. “Rocco really looks out for them. And they seem to think of him as an older brother.” 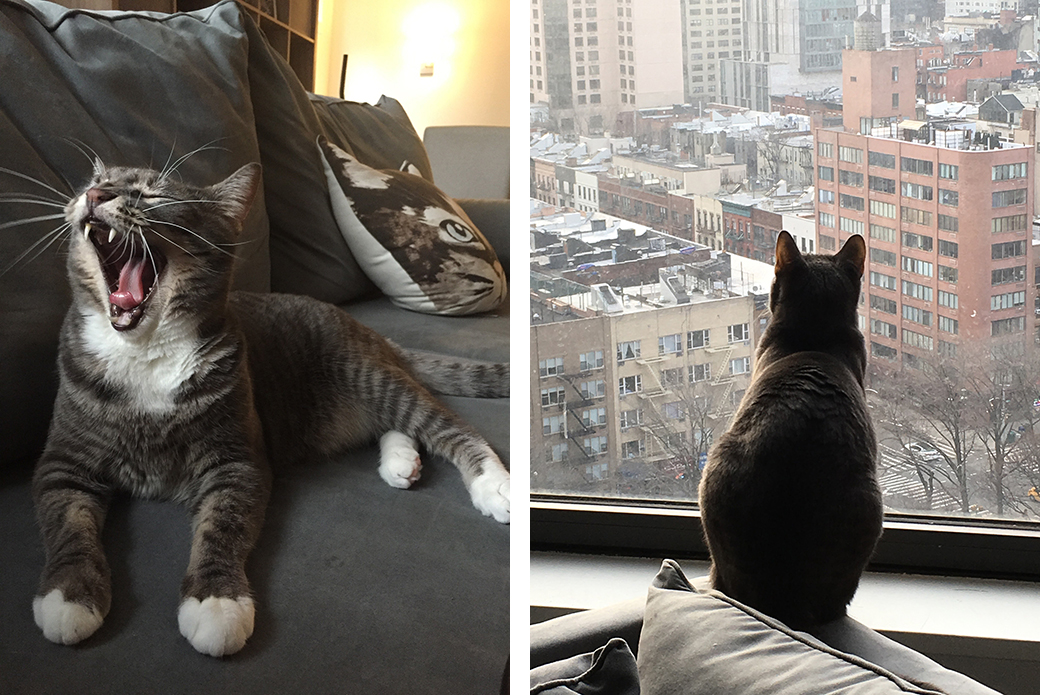 A Friend to All

“Other cats might run and hide when a delivery man shows up, but Rocco greets anyone who comes over,” says Julie.

Rocco also senses when Julie is on her way home and waits patiently for her by the door. Julie and Terry’s routines are his routines.

“When dinnertime rolls around, Rocco has his dinner too. And at bedtime, he wants to be on the bed with us.”

“He’s more like a person than a cat,” says Julie, looking at Rocco. “I often catch him sitting up like a human on the couch, mimicking me watching television.” 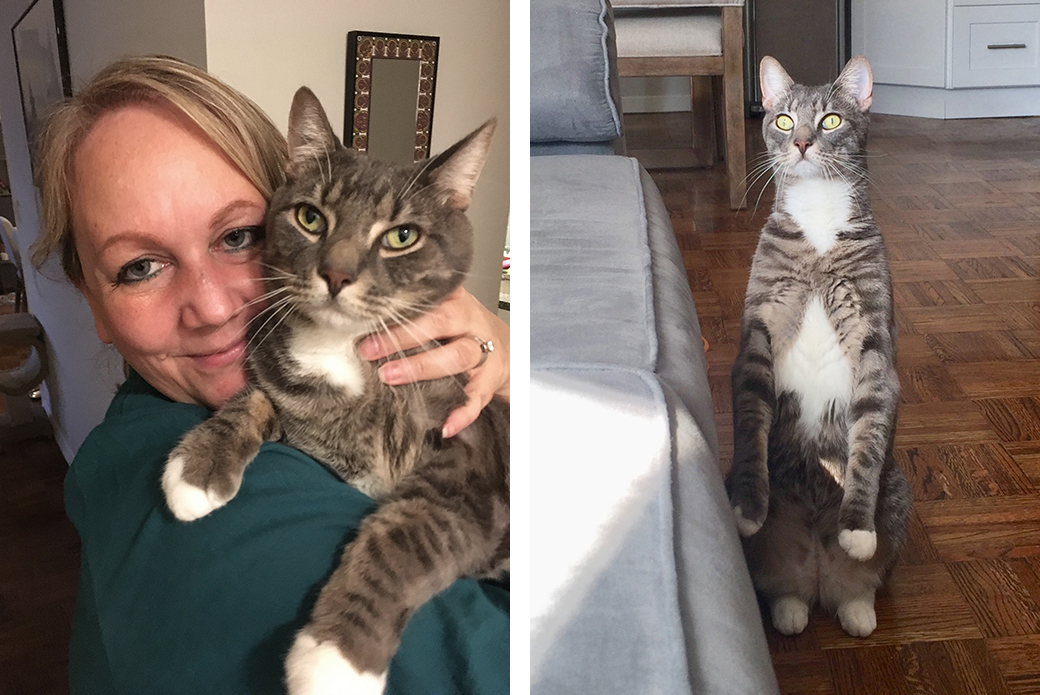