One Year Later: Inside Look into the Rescue of More Than 500 Puppy Mill Dogs

It has been one year since the ASPCA assisted the Animal Rescue League of Iowa with the rescue of more than 500 dogs living in horrific conditions at a USDA-licensed Iowa puppy mill operated by Daniel Gingerich. Though Gingerich had a long, documented history of animal welfare violations, in November 2021, he surrendered the dogs, but only after the U.S. Department of Justice filed a complaint, and a federal restraining order was issued against him.

To give an inside look at our efforts to help dogs in cruel puppy mills and ensure the USDA is enforcing the Animal Welfare Act, one year later, we’ve asked ASPCA experts to reflect their role in the rescue, rehabilitation and legal work surrounding this case.

Q: How did the ASPCA first learn about the horrific cruelty taking place at the USDA-licensed breeding facilities operated by Daniel Gingerich?

A: The ASPCA first learned of the disturbing cruelty taking place on Gingerich’s properties after reviewing USDA inspection records. Despite documenting over 100 violations of the Animal Welfare Act on Gingerich’s properties between March and July of 2021, the USDA took no action to stop Gingerich. After many demands from the ASPCA, lawmakers and the public, the agency finally suspended Gingerich’s license for 21 days in September 2021. Weeks later, the Department of Justice filed a complaint detailing the horrific conditions at multiple locations in Iowa where Gingerich kept dogs, including dead dogs, dogs with untreated injuries and illnesses (like parvo and distemper), dogs with painful fur matting, dogs in cages that were too small, and moldy food.

Q: What was the outcome of the Gingerich case?

A: The Department of Justice negotiated the surrender of more than 500 dogs who were on Gingerich’s properties. Gingerich also agreed to have his USDA licensed canceled. The USDA assessed a $500,000 against Gingerich, but once the dogs were surrendered, the USDA canceled the fine.

Separately, the Wayne County Sheriff’s Office pursued criminal charges against Daniel Gingerich. Gingerich pled guilty to two counts of animal neglect. According to the plea agreement, Gingerich was sentenced to 30 days in jail and two years of supervised probation.

Q: What can be done to increase protections for dogs in commercial breeding facilities and ensure their abusers are held accountable?

A: Sadly, the Gingerich case is one of many examples of the USDA’s repeated failure to enforce the Animal Welfare Act, choosing instead to allow egregious violations to go unreported and unpunished. Less than a year after Gingerich surrendered hundreds of animals, the Department of Justice was back in court to stop another USDA licensed business, Envigo, from continuing to harm over 4,000 Beagles kept in similarly horrific conditions at a breeding facility in Virginia. 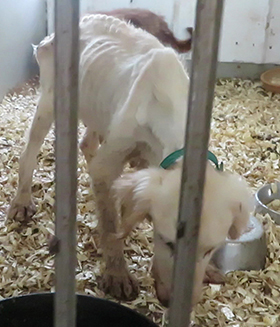 Q: What were the conditions like when you first arrived on scene?

A: When our team arrived on the property, we discovered the animals living in poor conditions. Investigators reported that some of the dogs on Gingerich’s multiple properties had untreated injuries and illnesses, including painful hair matting. Many dogs were housed in cages that were too small and often overcrowded with as many as six dogs in a single kennel, and there were dogs eating moldy food. Deceased dogs were also found.

Over the course of several days, along with the Animal Rescue League of Iowa, we removed more than 500 dogs from the three properties, transported them and began providing care.

Q: What is the process for rescuing that many animals?

A: Because of the sheer number of animals rescued from this puppy mill, we conducted initial identification and medical exams on the scene before relocating the dogs to a safe place nearby. Once there, they received further examinations for health certificates, which is a necessary step to allow the animals to cross state lines. This allowed us to determine which of the most compromised animals could be placed locally in Iowa, and which could be transported to the ASPCA’s Cruelty Recovery Center for forensic exams and more specialized behavioral and medical treatment or be placed with shelter partners outside of the state to be made available for adoption. A: This operation was very challenging to plan because of the large number of dogs and because they were housed in three separate locations. We needed to ensure that we had the right resources and teams in place in the right location, including field teams, medical experts, forensic veterinarians, an animal behaviorist, animal handling and documentation teams and animal transport drivers and vehicles. Significant coordination with multiple response partners and animal transport teams was required to ensure each team was brought into the operation at the appropriate time.

Q: Why are animal victims of cruelty and neglect relocated to the ASPCA’s Cruelty Recovery Center?

A: When the ASPCA assists with large-scale cruelty cases, we often relocate the animals to our Cruelty Recovery Center to provide ongoing care and enrichment for the animals, as well as any needed medical and behavioral treatment.

A permanent space to provide ongoing care for rescued animals is necessary so as not to overwhelm brick-and-mortar shelters that may not have the capacity to take in a large population of animals at any given time. This allows local shelters to focus on their lifesaving work on other animals in their communities while the ASPCA provides ongoing sheltering, medical and behavioral care for animals rescued from large-scale cruelty or neglect cases until they can be made available for adoption.

Q: What did the forensic exams for the dogs rescued from this case entail?

A. Once the dogs from this case arrived at our Cruelty Recovery Center, they were unloaded from a transport vehicle and settled into their kennels for the night. The first thing the next morning, the dogs were taken to our designated area in the facility where we conduct the exams in a quieter space away from the other animals. The exam process is a true team effort between the forensic veterinarian, a designated handler and a scribe to document observations.

Many of the dogs from this case were very nervous and shy, so our designated handler approached them slowly with treats to make them feel more comfortable and give them time to adjust before the exam started. The dogs likely never experienced wearing a collar or leash, so some of them had to be carried to the examination area if they were too scared to walk.

Just like other cases involving forensic veterinary exams, I dictated general characteristics about the animals, like their sex, age and fur color to an assistant who scribed my notes on a computer. Then we began an in-depth examination from the nose-to-tail, including examination of their skin, ears, oral cavity and even between toes and under their paw pads, etc. Many of these dogs had ear infections, dental disease, mammary masses and skin disease. We also looked for things like overgrown nails, infectious disease, parasites and other health concerns.

During the exam, we took photographs to support our handwritten notes. We took numerous photos of the animals from different angles, including close-ups of any specific issues we might find.

Following the forensic exam, all ongoing treatment is managed by the Cruelty Recovery Center’s designated medical team. It’s a collaborative effort, and everyone rallies to get the work done because we know how important it is to provide the animals with the care they so desperately need.

This case was particularly meaningful to me because it feels like it was the beginning of a turning point in the puppy mill industry. No matter how many laws in place to protect animals, they are meaningless if no one is enforcing them. 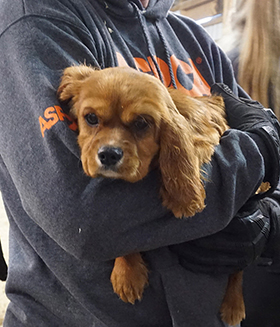 A: Some of the dogs were able to be placed with shelter partners once cleared by the Cruelty Recovery Center, but dogs from puppy mill backgrounds have almost always lived in isolated environments, where they get little, if any, exposure to the outside world. Some of the dogs from this case needed additional intervention and treatment. They were transferred to our Behavioral Rehabilitation Center to receive further care.

When the dogs arrived at the Behavioral Rehabilitation Center, they demonstrated severe fear in their initial behavior evaluations. This fearful behavior included things like:

Q: What did treatment for these dogs consist of?

A: Due to their limited exposure to the outside world, many puppy mill survivors show fearful responses to a range of things like social interaction with people, handling, walking on leash or encountering anything new.

The dogs who came to the Behavioral Rehabilitation Center from this case showed some social behavior with people early in the course of their treatment. But, several of them had significant fear of being leashed or walking on leash, so we were able to leverage their social interest in people, as well as other dogs, to develop their comfort with being handled and leashed. Once they were confident about people reaching for them to put a leash on, these dogs learned to really enjoy leash walking and exploring new places. 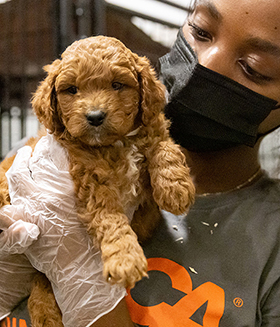 A: Many puppy mill dogs who come through the ASPCA’s Behavioral Rehabilitation Center “graduate” after treatment and go on to live successful, happy lives in adoptive homes. Over time, these resilient survivors can often overcome their difficult pasts to form bonds with people and learn to enjoy life as pets. They may still face some challenges after placement, like needing time to adjust to new environments, experiences and unfamiliar people, but, given patience, the right behavior modification techniques, and the right adopters, we’ve seen that the majority of even the most behaviorally damaged dogs can flourish in a home.

We are happy to report that some of the dogs who came to the Behavioral Rehabilitation Center have already graduated and adopted into loving homes: Lolly, Gladys, Frankie, Victoria, Dove and Colorado!

As we reflect on this case on the one-year anniversary, we are grateful that the dogs who once lived in this cruel puppy mill will never have to experience anything like that again. But, we must continue to fight for other dogs in commercial breeding facilities and hold the USDA accountable for protecting those animals. Please urge your U.S. representative to support Goldie’s Act by sending a letter through our simple online form today!