For Mara S., one of the most positive things to happen during a hectic 2020 was fostering a dog for the ASPCA.

When Mara, a scientist who teaches genetics at Brooklyn College, knew the COVID-19 pandemic was looming, she contacted her close friend Dr. Lori Bierbrier, Senior Medical Director for the ASPCA Community Medicine team.

“Mara’s goal was to foster a special needs dog to help the dog get closer to being adoptable,” says Dr. Bierbrier. “She knew post-COVID she wouldn’t be able to adopt.”

But Mara, a single mother with two children, knew the family would be confined at home for an extended period of time.

“My lab was closed, and I couldn’t do my research,” she says. “We needed a dog to help us through this. I knew we’d benefit as much as a dog would.”

Dr. Bierbrier put Mara in touch with Rachel Maso, Director of Behavior at the ASPCA Adoption Center, who identified an 18-month-old collie mix named Vanilla Bean—nicknamed VB—who had recently arrived at the ASPCA by transport from the South.

“She had heartworm disease and was fearful,” Rachel says. “When Dr. Bierbrier told me that her friend could take on a challenge, I suggested Vanilla Bean.”

VB was one of several dogs transported to the ASPCA on March 11 by the ASPCA Relocation Program just before the COVID-19 pandemic shut down much of the country. Originally from an overwhelmed caregiver, VB was taken in by Felines and Canines Rescue Center in Owens Cross Roads, Alabama, before being sent to New York.

“When Vanilla Bean arrived, she was very shut down,” says Corrine Fritzell, an ASPCA Behavior Specialist. “She wouldn’t walk or leave her kennel, and she showed no signs of being social. She was very scared.”

The behavior team assigned specific staff to handle VB. Afraid to leave her crate, the team hand fed her.

Knowing that she came from a rural environment, the behavior team set her up with fake grass in her kennel.

Soon VB was walking on a leash the short distance to the Adoption Center training room to visit her grass patch and play with toys.

“We worked closely with Mara to help VB settle in and come out of her shell,” Rachel says. “After she picked her up on March 24, we checked in weekly to give tips and tricks specific to her issues. We curated a treatment plan that would give VB time to decompress at her own pace. And Dr. Bierbrier checked in on her regularly. She had lots of support.”

“She was anxious—fearful of things like the TV, the ding of the microwave oven and the noise of shuffling papers,” says Mara. 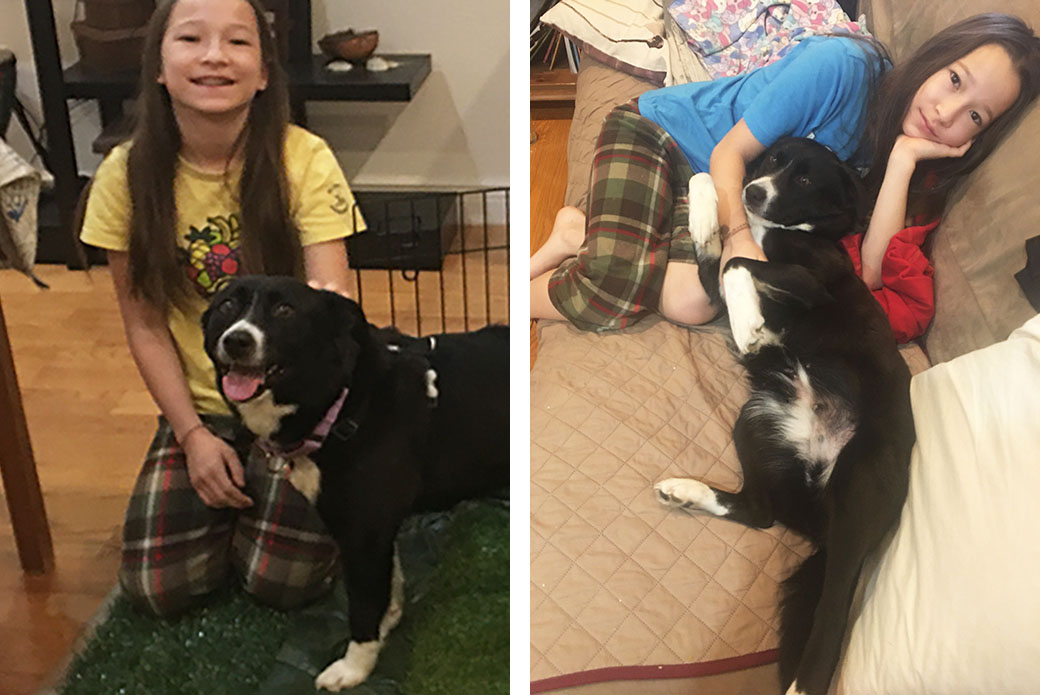 Above: VB in her foster home with Elah, one of her caretakers.

“She was really good for my kids,” Mara says. “She would hang out and liked attention. She was so good at sensing human feelings.”

Elah, Mara’s 10-year-old daughter, sometimes slept on the couch next to VB in the family’s living room.

“She was very sensitive,” says Elah. “She enjoyed watching birds and liked back massages and sitting in my lap.”

As VB gained confidence, she would steal Elah’s stuffed animals. She also got along with the family’s pet rat, Pedro.

“She was really smart,” says Mara, who chronicled VB’s progress. “When she started to play, that was a breakthrough. And when she began to sniff and do her business outside, that was another breakthrough.”

Although Mara’s teenage son, Ethan, is allergic to dogs, he didn’t shy away from playing with VB.

“There were also always people in the house, which was good for her,” says Mara.

It wasn’t long before VB would be noticed by another family with a house full of people.

John S., a retired Navy chief and ROTC instructor, had recently purchased a home on three acres that backs up to a state forest in Orange County, New York. John’s parents moved into the new home during the pandemic, joining him, his wife Yonalda, a school psychologist, and his mother-in-law, Miledy.

After applying for a dog on the ASPCA website that was already spoken for, John spoke with Rachel about VB.

“I could tell the ASPCA was careful about matching her with the right family,” says John, who met Mara, Elah and VB over Zoom. “It was a very mindful process.”

Three days after his birthday, on June 25, John drove to the ASPCA to adopt Vanilla Bean. For the occasion, Mara’s family had prepared a care package of VB’s favorite toys and treats.

“She wasn’t into eye contact at first, and she didn’t bark for three months, but today she’s a totally changed dog,” reports John, who renamed her Bibi.

Over Labor Day, the family adopted a seven-month-old rescued greyhound mix named Chiquita, who greeted Bibi by licking and kissing her face.

“Chiquita killed Bibi with kindness,” John says. “She won her over, brought her to life and brings out the best in her. They’re always looking out for each other.” 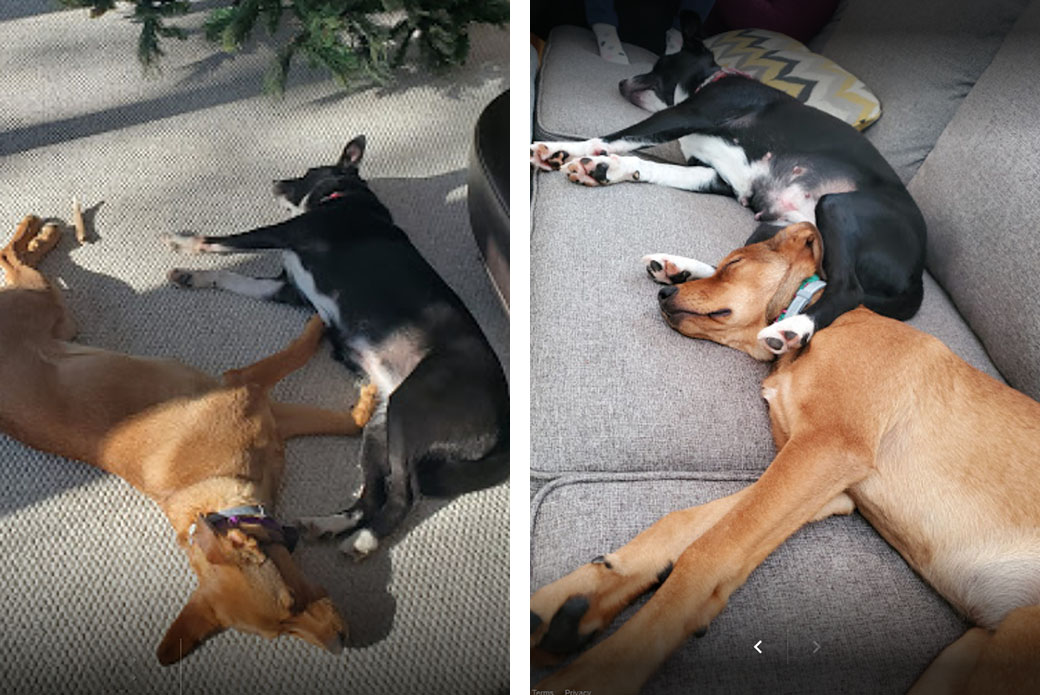 At play or asleep, Bibi and Chiquita are inseparable. 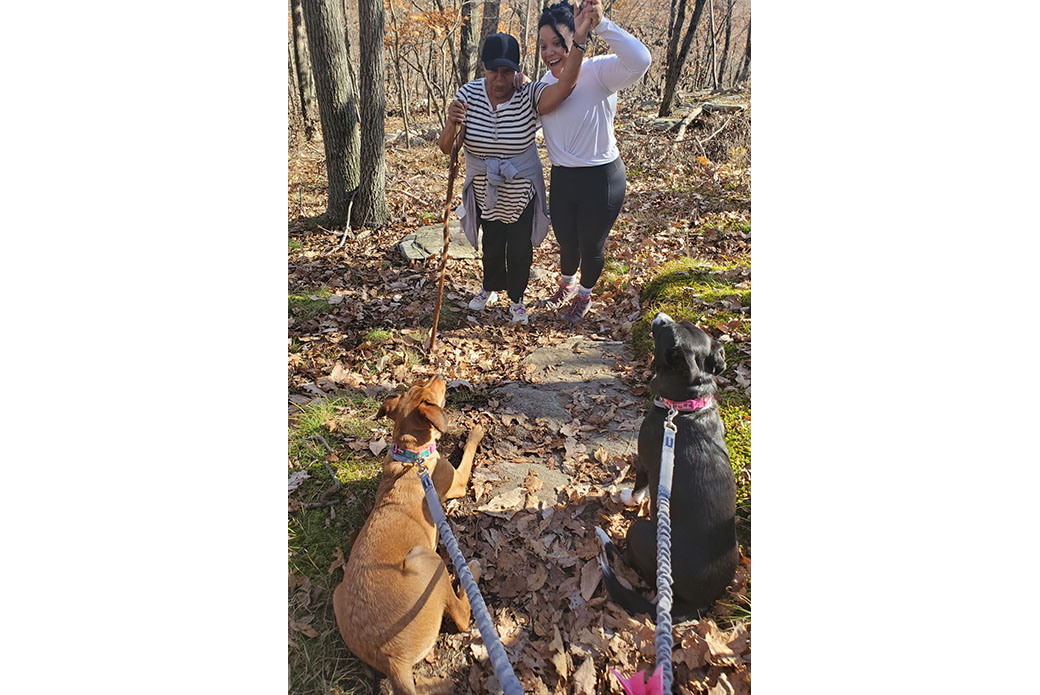 Mileday, left, and Yonalda, on a walk with Chiquita and Bibi.

Most important, the once-clingy dog always has loving company—human and canine alike.

“Bibi is one of our best COVID-era success stories,” Rachel says. “So many people had a hand in helping her.”

“Fostering Bibi was the most rewarding thing I’ve done in a long time,” Mara says. “It made such a difference in our life to see her transform into a happy pet. She turned out to be amazing.”