Researchers have been tracking a drug-resistant bacteria transmitted from pet store puppies to humans–Campylobacter jejuni. Findings are outlined in a recent report published in JAMA Network Open.

Campylobacter is an infection that can cause intestinal problems in people exposed to undercooked food or contaminated water. The infection might be uncomfortable, but typically people recover on their own. Older people, pregnant women or others at risk for serious illness might require antibiotics.

So, when states began reporting to the Centers for Disease Control (CDC) that there were patients with Campylobacter who were sick and not responding to the typical treatment, the CDC began to investigate. By 2020, the CDC was overseeing multiple outbreaks of Campylobacter in 20 states.

Researchers discovered that the patients not responding to traditional treatment were infected with a different strain of Campylobacter–one that is resistant to antibiotics. And alarmingly, the source of the bacteria was very specific. Almost all the patients had contact with puppies sold in pet stores, either as employees of a pet store, customers who bought puppies or pet store visitors.

The JAMA study suggests why pet store puppies are the cause of transmission. During the initial outbreak, researchers reported 95% of dogs they traced were given antibiotics by the breeder, transporter or pet store, and in some cases, dogs were given antibiotics more than once. Improper use of antibiotics is common in commercial dog breeding facilities, and crowding, plus lack of sanitation, allows diseases to spread.

The study points out that no patient reported exposure to Campylobacter through contact with shelter or rescue-group puppies. 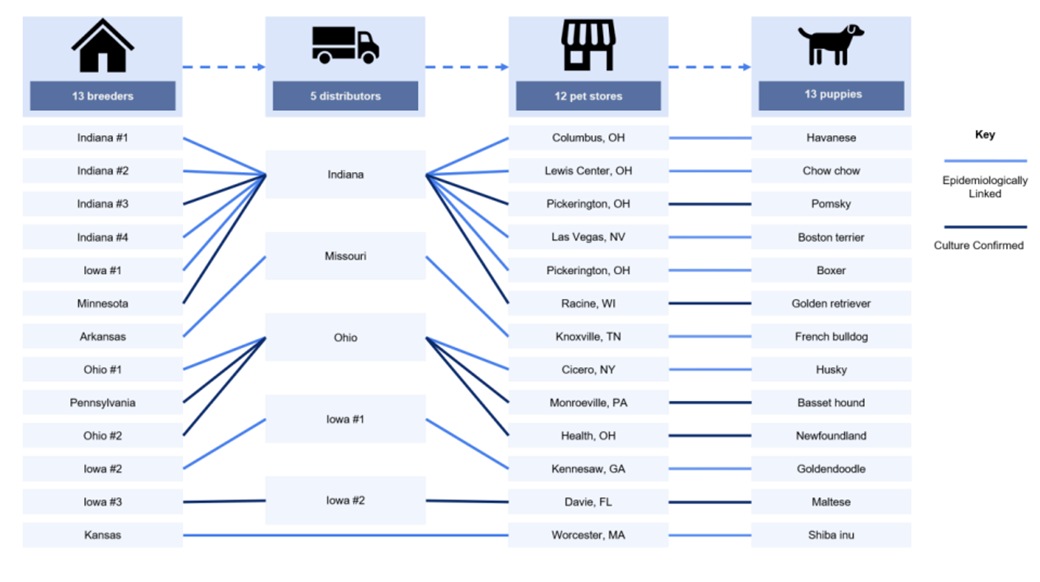 This figure shows breeder and distributer information for 13 puppies with a link to patients with the drug-resistant Campylobacter infection during an investigation from January 2016 to February 2018. Source: JAMA Open Network

Despite CDC recommendations issued, the JAMA report confirms Campylobacter infections continue to occur. Commercial breeders and pet stores who sell their puppies are still resisting changing their business model because it cuts into their profits. The changes needed to stop the spread of the antibiotic resistant bacteria include proper sanitation, more space for dogs, veterinary care and appropriate use of antibiotics. But it is cheaper and easier for commercial breeders to do what they have always done, regardless of the risk to the animals or public health.

The spread of this particular infection isn’t the only problem with pet stores–from deceptive promises to sick puppies, there is a long and sad history of selling pets by any means necessary. Learn more about the cruel puppy mill industry, and join our Advocacy Brigade to say informed on the latest news and actions you can take to put an end to the commercial breeding industry.