Arcturus Is the Bright Star for His New Adopter

Sometimes the universe has a way of choosing who crosses our path at the right time to have an important, everlasting effect on our lives. When Jordan was at brunch after a being on call at a local hospital in July 2016, he decided to visit the ASPCA Adoption Center. He wasn’t intend to adopt that day but felt compelled to visit our adoptable animals. There, patiently waiting, was sweet Arnold.

Arnold arrived at the ASPCA just two days before Christmas in 2016. He was brought in by the New York City Police Department (NYPD) after he was reportedly found tied to a bench in park.

“He was underweight, had skin lesions and multiple rib fractures,” says Dr Alison Liu, a Forensic Veterinarian at the ASPCA. “Most significantly medically, he had a heart murmur and pulmonic stenosis, which is a narrowing of one of the heart valves. He had a special procedure with a cardiologist to dilate the valve.” 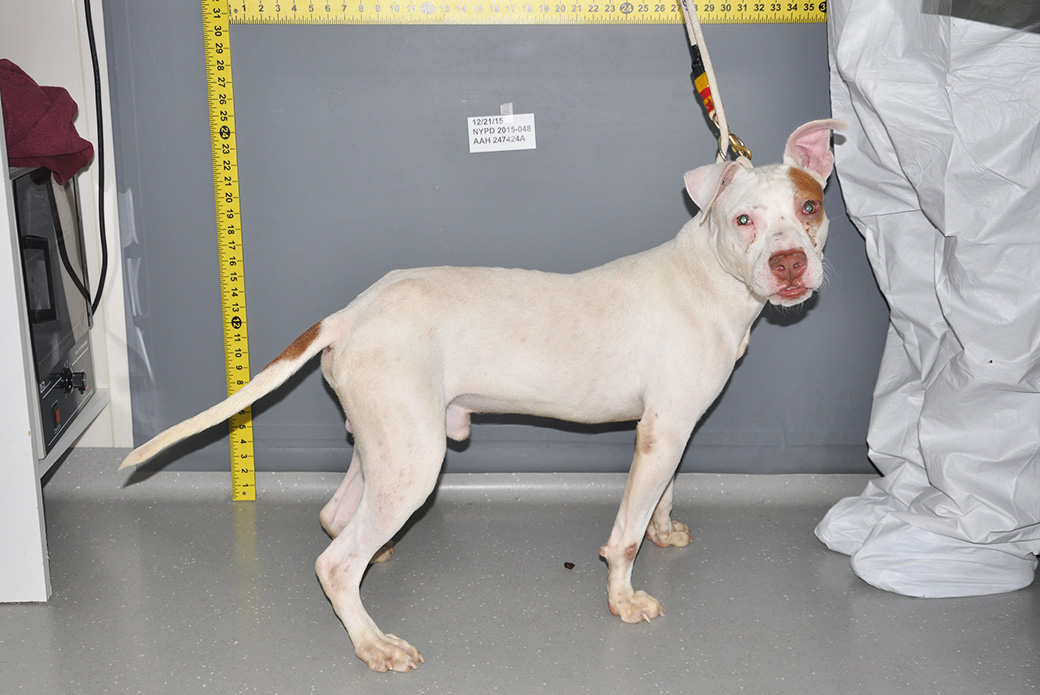 Arnold was monitored closely, and with time and medical attention, his physical condition improved. However, he would need to continue taking heart medication and have rechecks with a cardiologist every so often—a possible deal breaker for potential adopters.

Despite his medical condition, Arnold was happy and healthy! With a great quality of life, Arnold was looking for an understanding family who would overlook his medical issues and see him for the wonderful dog he is. 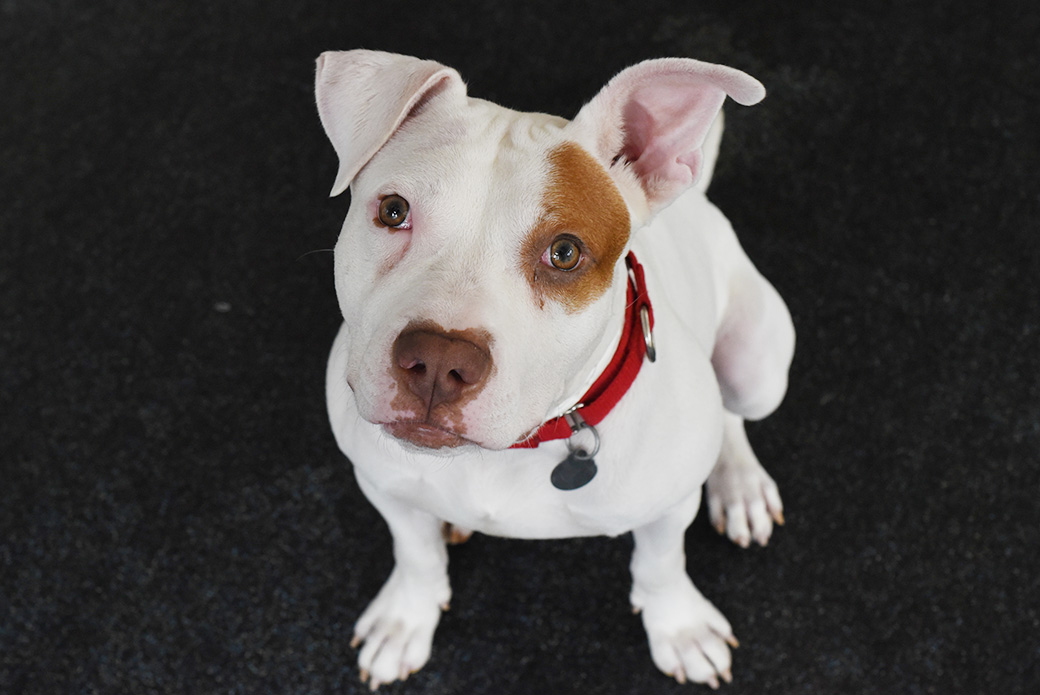 Written in the Stars

As Jordan toured the Adoption Center, he was introduced to various adoptable animals. In the second-to-last kennel of the tour, Arnold waited to greet Jordan.

“I vividly remember Arnold coming up the glass and hopping up to say hi,” recalls Jordan fondly. “He tilted his head to the side, one of his ears perked up while the other was flopped over. I instantly fell in love. He peaked his nose through the hole in the glass to lick my hand and then spun in a little circle. My heart jumped!” 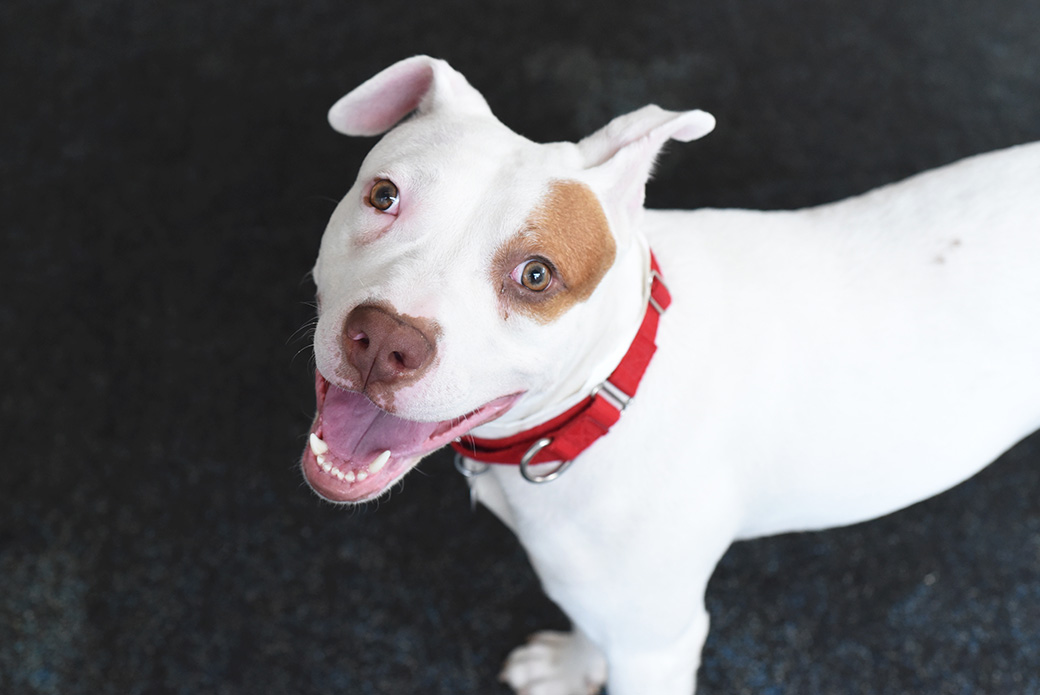 Jordan had fallen in love with Arnold’s happy-go-lucky personality. There was just one obstacle standing in the way of Arnold and his new home; would Jordan be discouraged by his history and the extra attention need for his medical condition?

“I read his profile telling his sad story of abuse and his recently diagnosed medical condition of pulmonary stenosis,” Jordan tells us. “I knew that, combined with him being a pit bull mix, likely deterred many people from adopting him. Being a physician, I felt I was more than adequately able to take care of him and give the medication he would need. We went on a walk together and I could see all of the joy that he had starting to peak through, and I was simply elated and had to bring him home!”

Jordan made the adoption official in July 2016, and Arnold was renamed Arcturus—Arc for short. The unique name was inspired by Jordan’s hikes to the Griffith Observatory when he was in Los Angeles. He would look through the Zeis telescope and tour the star exhibit. Arcturus is the brightest star in the Northern Hemisphere and the first star in the Big Dipper’s handle. Here on earth, Arcturus is the star of Jordan’s life.

Once home, Jordan was surprised at how well Arc adapted to his new surroundings. He was informed by ASPCA staff that Arc may struggle with training, but, “He picked everything up in no time!”

“Life in New York City was amazing, everyone in my apartment and in the neighborhood in Spanish Harlem fell in love with him just as I did,” says Jordan.

Jordan had to move to California for his fellowship, and there was no question that his best friend would be moving with him. The relocation didn’t seem to faze Arc at all—the positive pup took it in stride!

“Arc [is having] the time of his life—going on hikes, going to the beach and endless trips to the dog park, where he has made so many new friends,” says Jordan. “He has become quite the social butterfly and it has been a joy to see him break out of his timid shell. He is such a happy guy! All he wants to do is play and cuddle.” This is not a one-way friendship by any means. Although Jordan has provided a loving home for his dog, filled with fun and adventures, he also relies on Arc for his companionship and support during life’s tough times.

“During my last year of residency, as chief resident in surgery, both my grandfather and then my father passed,” Jordan tells us. “Arc was there for me through all of it. His love and empathy were literally the only reason I was able to make it through that difficult time. So yes, it might be cliché, but he rescued me as well. Arc is my best friend; more than I can express.” Arc is an example of how shelter dogs can move past their previous hardships and be an ambassador for other adoptable animals.

“Everyone in the neighborhood loves him,” Jordan tell us. “He’s actually helped a few people get over their fear of big dogs, and because of him one family adopted a dog. Adopting enriches your life in ways you can’t even fathom. With love, patience and understanding, adopting a pet will not only make a better life for the adoptee but will improve the adopter’s life too.”