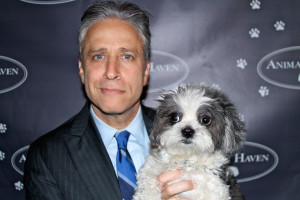 A new animal sanctuary is opening in Middletown, New Jersey soon and you won’t believe who its owners are. Well, maybe you will since these kind souls are longtime animal rights activists and one of them has appeared in many of our living rooms hundreds of times. We’re speaking, of course, of former The Daily Show host Jon Stewart and his lovely wife author Tracey Stewart. The Stewart’s animal sanctuary will eventually be home to an unknown number of neglected animals who Fetch! Pet Care is certain can’t wait get settled in!

While the couple was being honored with the Gift of Life Award by noted advocacy group Farm Sanctuary last month, Tracey Stewart gleefully announced that the farm recently purchased by she and her husband would soon become the fourth animal sanctuary affiliated with that group. Along with other sanctuaries already operating in Watkins Glen, New York, as well as Los Angeles and Oakland, California, Tracey proudly proclaimed, “We’re going to build new advocates, new curious learners and new leaders for this very important movement.”

The First Guests Have Arrived

Jon and Tracey Stewart’s animal sanctuary hasn’t officially opened yet, but it is expected to do so in 2016. That doesn’t mean that the farm hasn’t begun opening its gates to neglected animals in need though! Its first two residents, a pair of piglets named Anna and Maybelle, have already nestled into their new home. Anyone wishing to say hello to Anna and Maybelle or who just wants to follow the progress of transforming the farm into an animal sanctuary may do so on The Daily Squeal’s Facebook page.

Thoughts on the New Animal Sanctuary?

What do you think about Jon and Tracey Stewart’s new venture? Are you affiliated with a particular animal sanctuary in your city or town? Any plans to open your own sanctuary in the future? Share what’s on your mind in the comments section below.