Accommodating Adoptions During a Pandemic 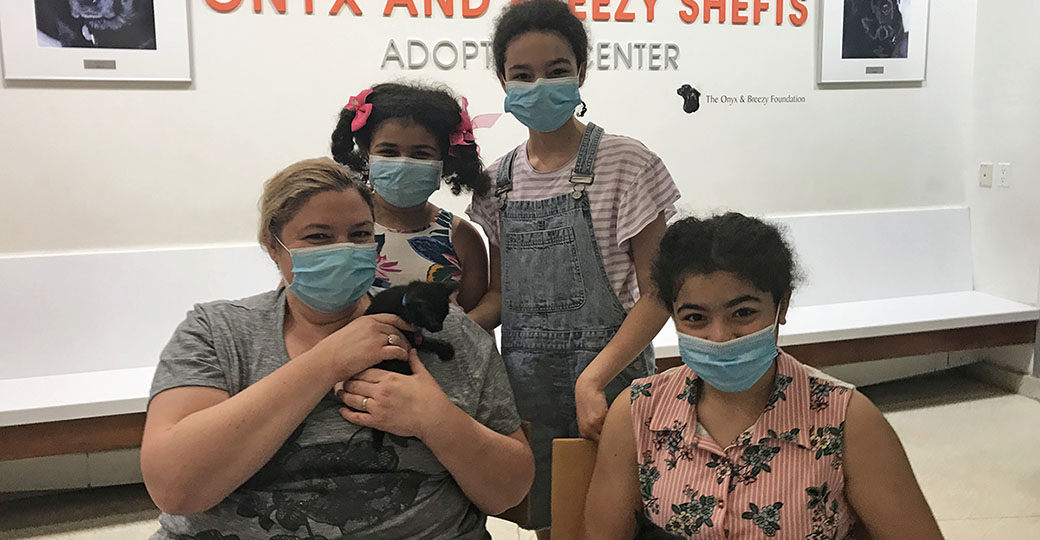 Eleni and her daughters, from left, Christina, Victoria and Adamantia, and their newly adopted kittens.

When the ASPCA closed our  Adoption Center in Manhattan due to the COVID-19 outbreak, accommodations were made so potential adopters could meet adoptable animals online.

While many cats and dogs were placed with foster caregivers, other adoptable animals were placed thanks to the help of virtual meeting platforms, including Zoom. To support these efforts, the ASPCA designated June 5-7 as ASPCA National Adoption Weekend, partnering with animal shelters and rescues nationwide to help more animals find homes, many through remote adoptions. The ASPCA itself launched online adoption services on May 14.

We spoke to several families who found their new four-legged family members on Zoom during National Adoption Weekend—including canines, felines and equines. 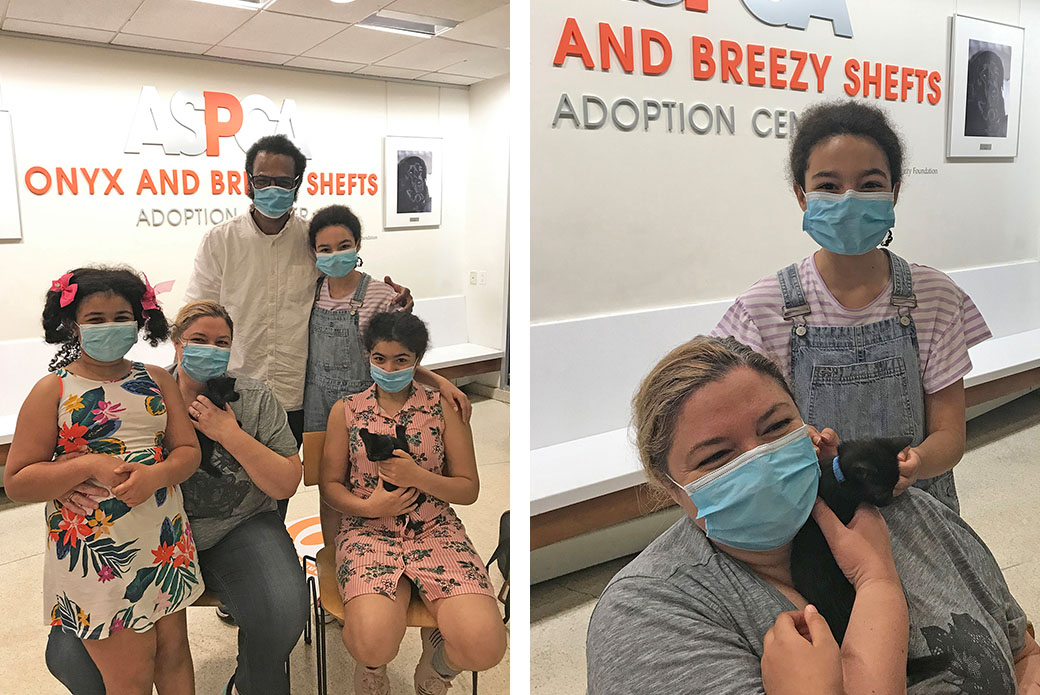 Left: Pedro and Eleni with daughters, Christina, Victoria and Adamantia. Right: Eleni and Victoria with Midnite.

Pedro and Eleni L., and their daughters Adamantia, 12, Victoria, 10, and Christina, 8, were introduced to their future two kittens, Luna and Midnite, via Zoom by ASPCA Matchmaker Lisa Berger after they completed an online survey from their Montclair, New Jersey home.

“The girls had been asking for a new pet for a while,” explains Eleni. “Then the pandemic happened and we found ourselves at home every day.”

“There was a gap in our lives,” she adds. “It became clear that we were ready for a pet. We thought hard about it and the decision was not made lightly. But the long wait paid off.

Luna and Midnite were part of a litter of seven born to a stray cat who had been brought to the ASPCA on April 23. Mother and babies were fostered by Devon D. and her family.

“I loved the Zoom calls because it’s nice to see the families who are adopting the kittens,” says Devon. “You’re confident they’re going to a good place. We go into fostering knowing we’re not going to keep them, and we try not to fall in love. We can love a little, but we can’t fall too hard.”

After a successful Zoom call with Devon, the kittens and the potential new family, the ASPCA arranged for Pedro and Eleni to pick up Luna and Midnite on June 5 at the ASPCA Adoption Center. 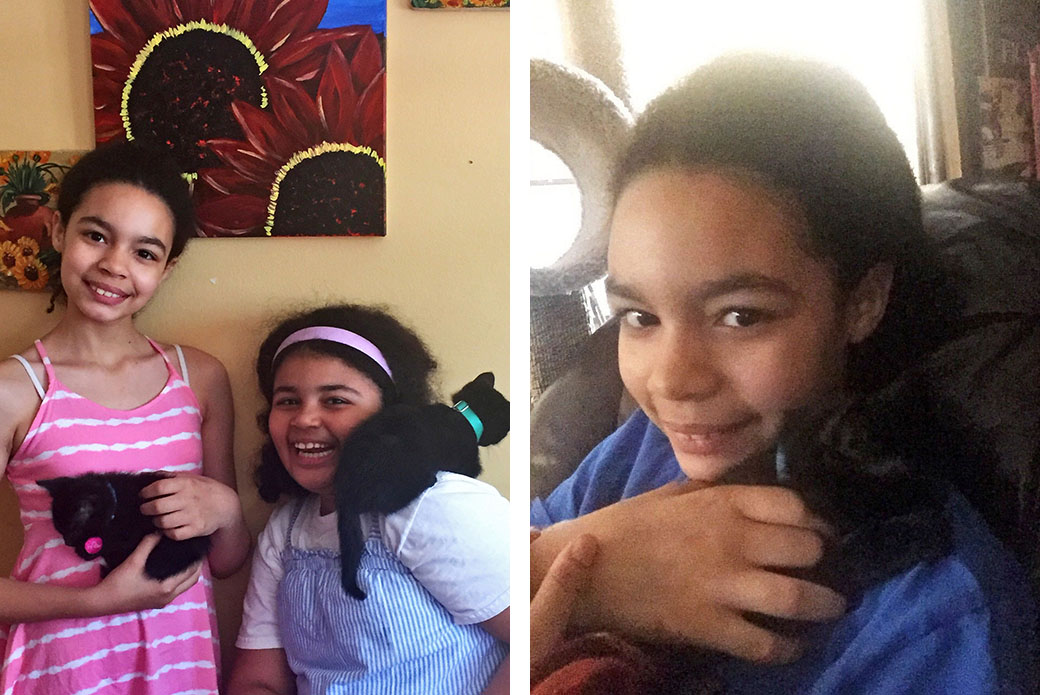 When they arrived, the family selected colorful collars and tags for their new furry family members and posed for photos while wearing masks and social distancing with adoption staff. The family had filled out their adoption paperwork online, prior to their arrival at the shelter, so the adoption process moved swiftly.

“All three girls have taken responsibility in feeding and caring for them,” says Eleni. “Christina tells them her complaints like they’re her friends. And they all sing them a lullaby my husband used to sing to them when they were little. We ended up with the perfect pair.”

“A Ray of Sunshine”

Chyanne B. has always been a dog lover and recently decided it was time to adopt one.

“I literally woke up one day and said, ‘I’m adopting a dog,” says Chyanne, a call center customer care agent currently working from home because of the pandemic. “I do have two cats, but they don’t like to cuddle.”

Chyanne filled out the ASPCA’s online survey and a staff member set up a Zoom call so she could meet Sox, a two-year-old black and white terrier mix who was relinquished to the ASPCA due to a COVID-19 death in Sox’s previous family. 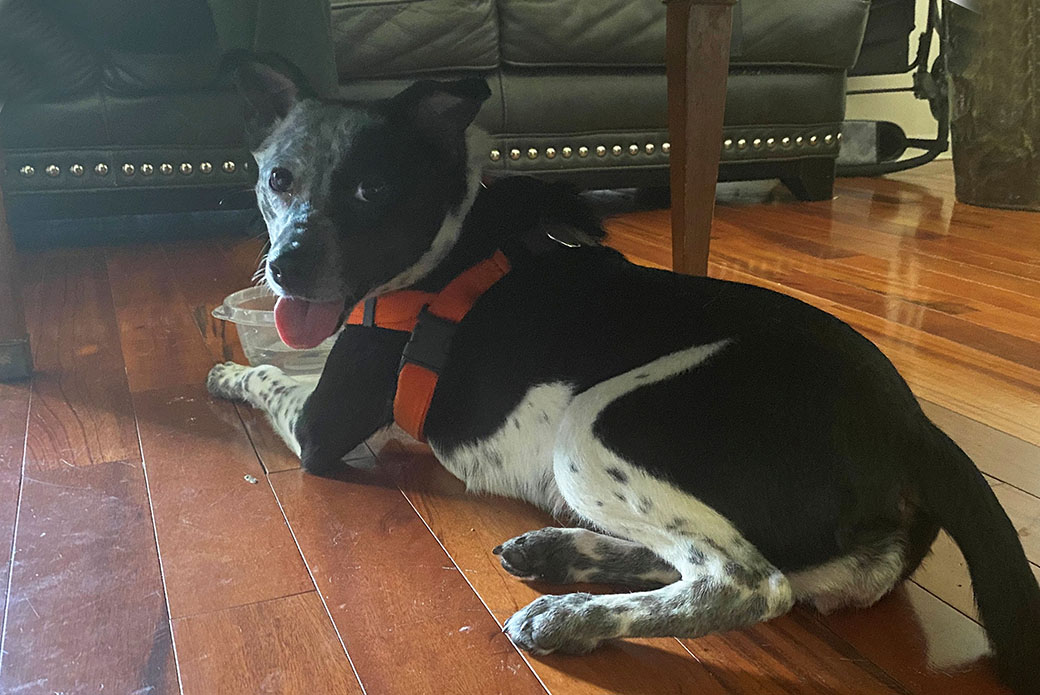 Sox in his new home.

“The ASPCA explained that Sox was calm and gentle and might mesh well with my cats,” Chyanne recalls.

Days later, after completing the adoption paperwork, a friend drove Chyanne to Manhattan from her home in Plainfield, New Jersey to pick Sox up. 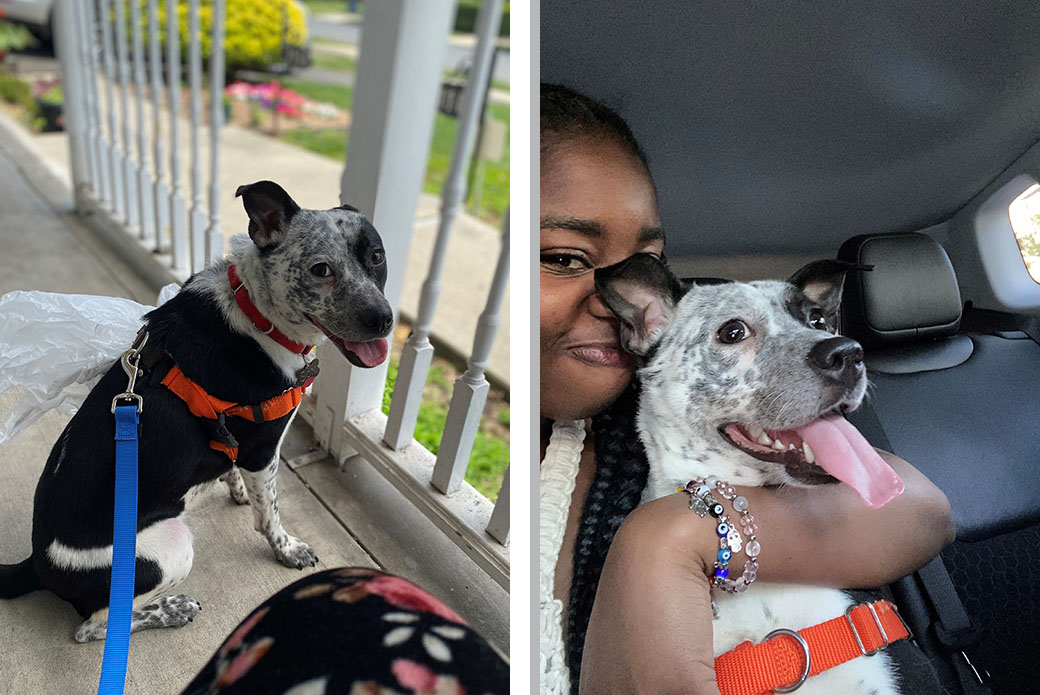 Sox at home and with Chyanne, right.

“It was a very simple and quick process,” Chyanne says of the remote adoption experience. “When I arrived, they brought her down to meet me, while I got her tags and they walked her to the car. It was a very smooth hand off.”

At home, Chyanne reports that Sox is “growing on everyone—even the cats are starting to warm up.”

“My mother loves her, and so does my 10-year-old daughter, Rylei,” added Chyanne, who lives with several extended family members. Sox has also taken a liking to Chyanne’s newborn nephew.

“She’s just been this little ray of sunshine,” says Chyanne.

A Diva for Bug

On May 6, Quinn D. and her family moved from San Diego to Noble, Oklahoma, near Oklahoma City, bringing along their 27-year-old bay quarter horse, Bug.

“We’d wanted to move for a while,” says Quinn, who taught pre-school for 18 years but lost her job during the pandemic. Quinn’s’ husband Will, a truck driver, and mother, Sandra were also laid off because of COVID-19.

“We’re not really city people and crave wide open spaces,” she adds. “Between us we also have four kids, two cats and two dogs, so we figure this is a better life for everybody.”

Because Bug had always been in a boarding facility with other horses, Quinn was concerned he’d be lonely on Oklahoma’s vast plains. She went online and typed in “horse adoption” and “OK City,” and Nexus Equine, an ASPCA partner rescue, popped up.

“I wanted an older horse as a companion for Bug,” explains Quinn, who has ridden for 30 years and adopted Bug 22 years ago. “I don’t necessarily want to ride Diva; I want them both to enjoy their retirement.” 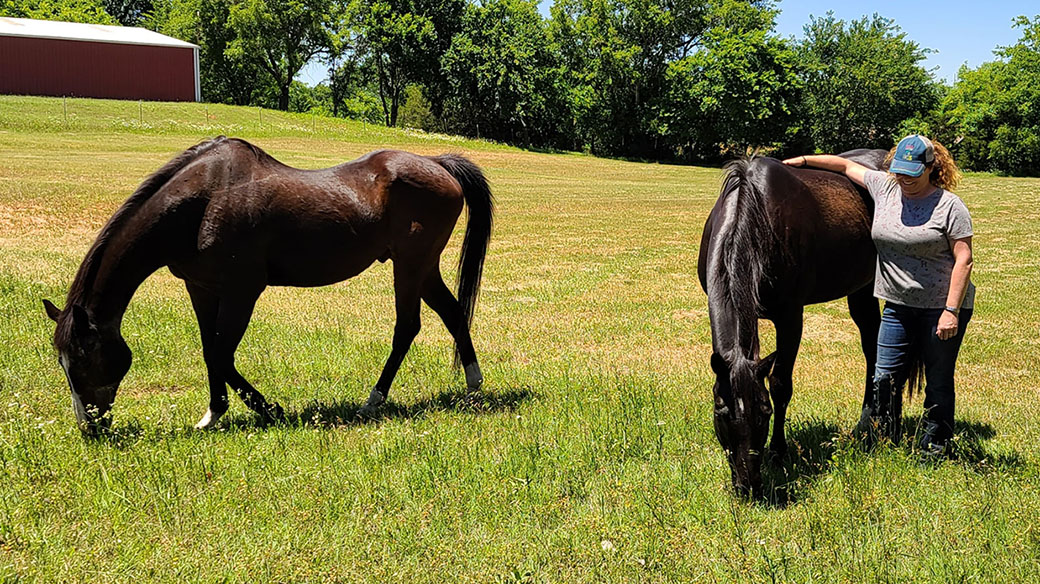 Quinn filled out online application and via texts and phone calls connected with Nexus staff. She and Will met Diva on June 5 and decided immediately that they wanted her.

“It was very simple and easy,” Quinn says. “Nexus emailed me the contract and veterinarian info. Diva was delivered the next week.”

“I put a halter on Bug and Diva was walked into the field, and we gave them a couple of minutes to get acquainted; they’re doing really well.” 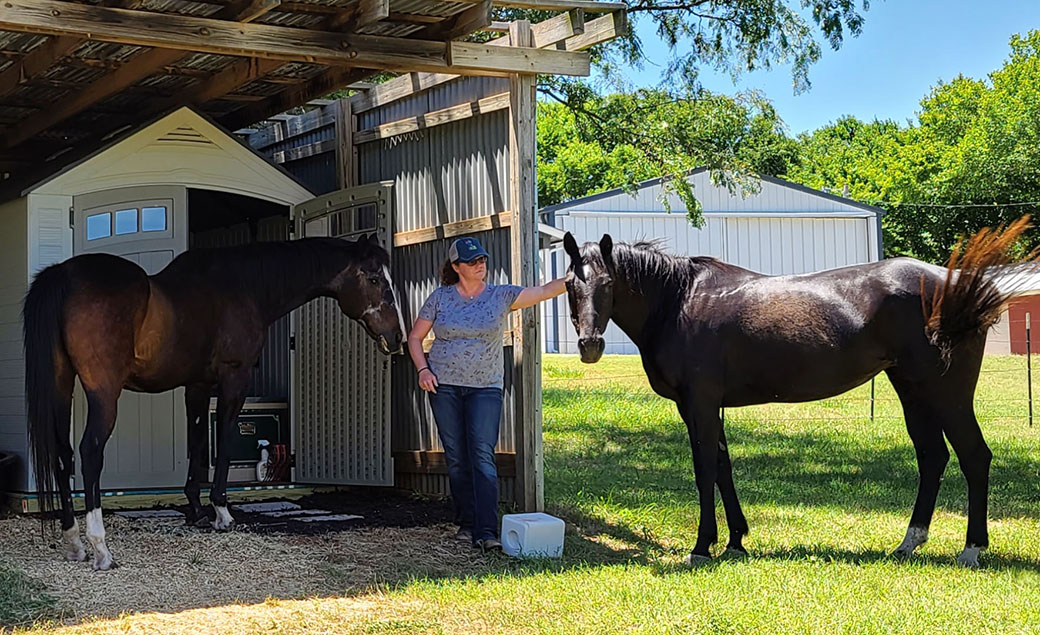 Quinn with Bug, left, and Diva.

“It’s been nice because I think Diva’s helped him adjust to the thunderstorms,” Quinn says.

Thanks to innovation, compassion and commitment, Diva and Bug will now weather any storm together.