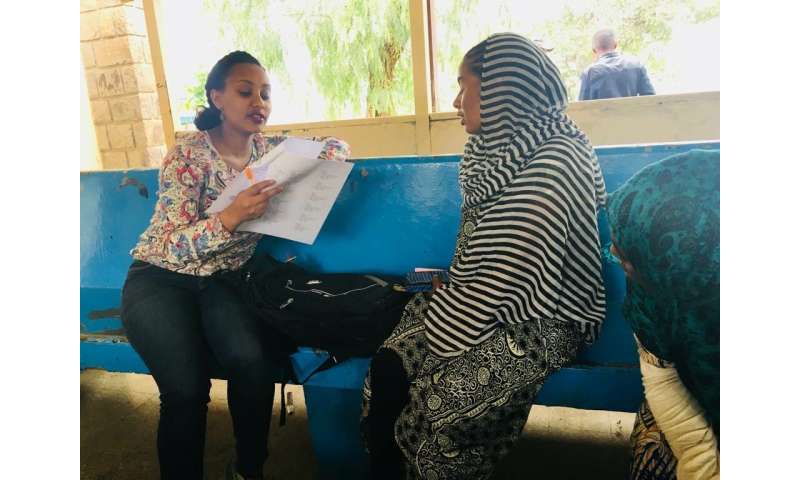 A study of Ethiopian women’s use of traditional medicinal plants during pregnancy has come up with several surprises. The most worrisome is that most women don’t tell their doctors about the practice.

Before Selamawit Seid Nega at the University of Oslo embarked on her ground-breaking study, the hypothesis was that pregnant women in urban areas were using less medicinal plants than their more rural or semi-urban sisters.

“The only factors that I found associated with the use of medicinal plants, are age and marital status. The odds of medicinal plant use during pregnancy is three times higher among the unmarried women than their married counterparts. And the older the women get, the greater the chance of using medicinal plants,” Nega adds.

Researcher Selamawit Seid Nega interviewed 600 pregnant women in four health centres in Ethiopia, three in the capital city Addis Ababa and one in the semi-urban town Bati located in north-central Ethiopia. Her study shows that 60 percent of the women used medicinal plants during their pregnancy, the percentage being the same in both towns.

The result also indicates that 38.8 percent of the participants used both pharmaceuticals and medicinal plants during their current pregnancy in Bati, compared to 23.8 percent in Addis Ababa.

“But the really big surprise is that a large majority of the medicinal plant users (94 percent) don’t tell their doctors about the use of medicinal plants That is, in my mind, a cause for concern,” Nega says.

Nega is worried because herbal teas and other traditional medicinal plants may contain substances that have interactions with pharmaceutical drugs, or maybe they even can harm the fetus or the pregnant woman. “Nobody knows for sure, because there has been very little research on this topic,” says Nega.

“Our study has found a significant association between religion and the use of the plant known as black cumin in English and tikur azmud in Amharic (Nigella sativa). Being a Muslim increases the chance of using tikur azmud 19 times. Those who are using tikur azmud has referred to the Quran, the holy book of Islam, and Prophet Mohammed’s quote narrated by Abu Hurayrah “Use this Black Seed regularly, because it is a cure for every disease, except death.” (Sahih Bukhari 7:71:592).

The most commonly used medicinal plant products used by pregnant women in Ethiopia are made from Ethiopian basil (Ocimum lamiifolum) and ginger (Zingiber officinale). Products made from medicinal plants are often perceived as harmless because they are “natural,” but that may not be the case.

“One experimental study showed that aqueous infusion of fringed rue (Ruta chalepensis) during the organogenesis period of pregnant mice caused significant changes in development of reflexes, weight gain of pups, physical signs and differences in histological changes in fetus and placenta. In addition, the use of R. chalepensis showed loss of muscular strength and impaired neuromuscular function, Nega explains.

“You never know how much active ingredients there are in the dose you are ingesting. When it comes to garlic, some researchers have found possible interactions with some medications like paracetamol. Nobody knows for sure if it is safe for pregnant women to use these products,” explains Nega.

“I wanted to do this research because we have too little knowledge about the potential side effects of the concomitant use of pharmaceutical drugs and medicinal plants. Maybe some of these practices are harmful. My advice to pregnant women is that they have to confirm with their doctors before using any medicinal plants. That would reduce some of this uncertainty,” Nega suggests.

Ethiopia was one of the poorest countries in Africa, but has gone through a period of rapid economic growth in later years. The government has used the growth partly to invest in establishing public health clinics all over the country. The result is that pregnant women have free access to prenatal care and professional doctors. So – why do they still use a lot of medicinal plants, and why don’t they tell their doctors? Is it because they don’t trust doctors?

“No, the interviews indicate that most women trust their doctors, but they just don’t know that they should inform about the use of plant products. They are instead thinking about visits to the doctor and using medicinal plants as separate topics. In addition, they don’t know that some of the home-made medications may have side effects,” Nega answers.

The extensive use of home-made medicinal plant products has very long and strong traditions in Ethiopia. These traditions are still very much alive, even if the trend is towards increased use of doctors and pharmaceutical medicines.

“Pregnant women are often encouraged to use these products by their family members and neighbours. They can often prepare these medications and convince the pregnant women to ingest them. Most people, even in Addis Ababa, can grow medicinal plants in their own backyards, and the rest is bought from markets,” Nega explains.

One of Ethiopia’s largest and most famous markets is in Bati, where Nega conducted some of her research. Bati is situated at the crossroads between the Ethiopian highlands and the Great Rift Valley and is a meeting point between ethnic groups like the Amhara, the Oromo and the Afar. One of the attractions at Bati’s market is the large offering of herbs and herbal products.

Selamawit Seid Nega isn’t too sure about the response pregnant women might get if they told their doctors about their use of plant products.

“Doctors and health care workers in Ethiopia don’t have enough education about interactions between pharmaceutical drugs and home-made plant products, and there is very little knowledge in this field. But it is always a good idea to tell your doctor about the medications you are using!”

“The treatment was a local alcoholic drink mixed with some herbal ingredients, which he had to drink on an empty stomach and then throw up. The herbalist gathers the vomit in a pot and continuously stirs it with a stick, while checking if the stick comes out with a sticky mucus substance. This process should be repeated until the stick is free of mucus. You are supposed to be cured after three or four days,” Nega remembers.

Stories carrying a lot of weight

“You can’t rule out that the plants used in the drink really contain an ingredient with an effect against hepatitis. My point is that there are lot of stories about such treatments and cures in Ethiopia, and the stories carry a lot of weight. So, there is still a lot of research to be done in this field,” Nega concludes.

Selamawit Seid Nega studied pharmacy at Mekelle University in the Tigray region, and then worked for two years as a pharmacist. In 2015, she came to Norway with a scholarship in order to take a master’s degree in International Community Health at the University of Oslo. Nega wrote her master’s thesis under the supervision of Professor Hedvig Nordeng at the University of Oslo’s Department of Pharmacy. The study has been conducted in collaboration with the Ethiopian Public Health Institute.

The African continent is known for its rich biodiversity, and may play an especially important role during pregnancy, childbirth and breast feeding. The lack of overview of use of medicinal plants during pregnancy in many African countries and regions, however, complicates surveillance of efficacy and safety of these products.