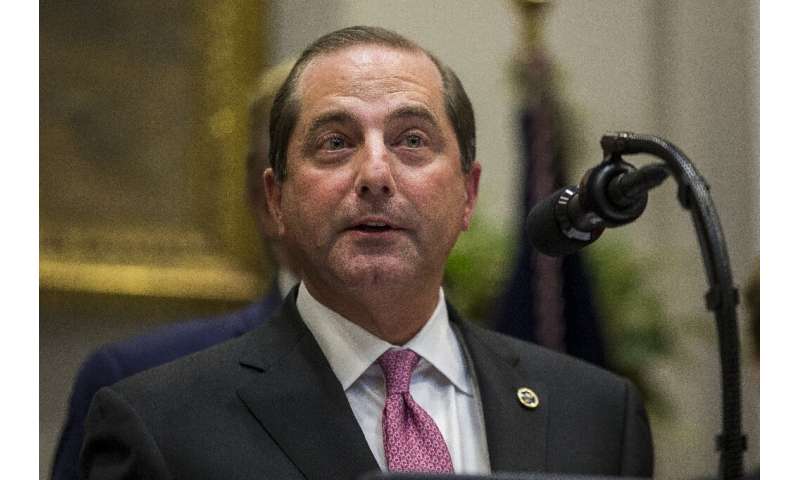 Donald Trump’s administration unveiled a plan Wednesday to allow imports of lower-price prescription drugs from Canada and other countries, a top priority for the president ahead of next year’s election.

But is unclear when the proposals would go into effect and Canada has indicated it is concerned about the potential impact for the supply of drugs on its own market.

“No president in history has ever had (a Food and Drug Administration) willing to open the door to safe importation of drugs from Canada,” Health Secretary Alex Azar said in a conference call with the press announcing the scheme.

Unlike most other advanced economies, the US allows manufacturers to set their own prices rather than having to negotiate with national health insurance systems.

The result has been spiraling costs: Americans spend an average of $1,200 on prescription drugs per year, according to the Organization for Economic Cooperation and Development—more than in any other country in the world.

The price of insulin, a life-saving medicine used to treat diabetes, has more than tripled over the past decade, forcing many uninsured patients to ration their doses, smuggle it in from Canada or Mexico, or even choose between treatment and other basic expenses such as rent.

The issue has come to the fore in 2020 presidential election campaign, with all the leading Democratic contenders vowing to repeal the law that prohibits the government from negotiating with the drug manufacturers.

Senator Bernie Sanders has also led bus trips across the border from his home state Vermont to buy lower cost insulin in order to highlight the problem.

Azar proposed rules and guidance Wednesday indicating two pathways to formalize the president’s plan that was first outlined in July.

Under the first, US states would be allowed to propose importation programs for drugs already authorized in Canada, subject to approval by the US Food and Drug Administration.

However, the program would not include biological drugs—ones made from large or live molecules—meaning medications such as insulin would be excluded.

A second pathway would allow US pharmaceutical companies to import drugs originally manufactured and intended to be marketed abroad, including biological drugs like insulin.

The measure, Azar said, would allow drug companies to “bring that same product in the United States to basically compete against your own product, but at a lower list price.”

Both pathways are subject to comment periods before they a finalization period, but there is no set timeline for their implementation.

Canada has also expressed concerns. Last month, its acting ambassador to the United States Kristin Hillman said in a statement to reporters that “Canada cannot increase its domestic pharmaceutical drug supply to meet US demand.”

She also cited a recent study that estimated if 40 percent of US prescriptions were filled from Canada, the Canadian drug supply would run out in 118 days.

The plan meanwhile could face legal challenges from the pharmaceutical industry, which denounced it as “dangerous” when it was first previewed in July, arguing patients could be exposed to substandard or counterfeit drugs.

Stephen Ubl, CEO of Pharmaceutical Research and Manufacturers of America, urged the government to instead focus on policies that lower patients’ out-of-pocket medicine costs, the portion that insurance companies do not cover.

The industry argues that pushing down prices would undermine innovation, but numerous studies have found that rising expenses are not linked solely to research and development.

A 2016 Harvard Medical School study blamed factors such as the US patent system, which grants makers “government-protected monopolies” through market exclusivity that lasts years before generics can enter the market, and can be extended through “trivial” changes to patented molecules.