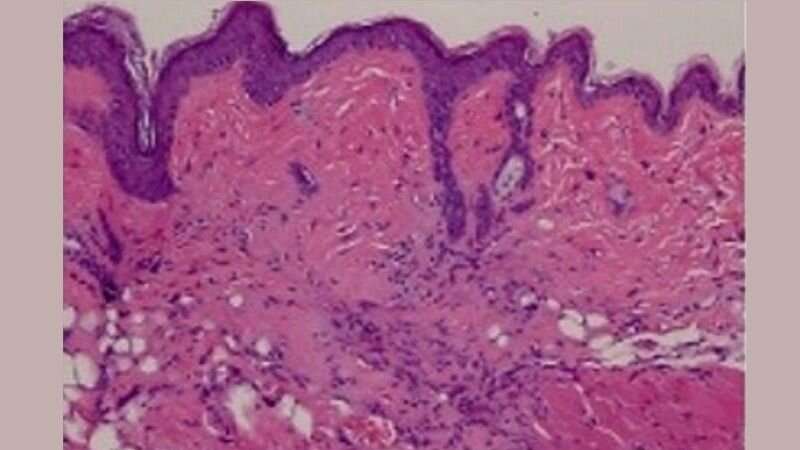 Sixteen years ago, a research group at Mayo Medical School published results showing that a protein called TRAIL can kill cells that cause liver fibrosis but no one seemed to follow up on these findings. Now, researchers at Johns Hopkins Medicine have improved on this protein and shown that it selectively kills cells that cause the hardening of skin associated with scleroderma, effectively reversing the condition in mice genetically engineered to mimic the disease. A report on these results was published earlier this year in Nature Communications.

“We came into this rather accidentally, but are very pleased to find that the human TRAIL protein analog we developed could potentially be a universal drug for all types of fibrotic diseases, of which scleroderma is a classic example,” says Seulki Lee, Ph.D., an associate professor in radiology and radiological science and member of the Center for Nanomedicine at the Johns Hopkins University School of Medicine. “And the vast clinical expertise at Johns Hopkins has allowed us many fruitful collaborations to thoroughly test the drugs that we develop to ensure we have solid results before going into clinical trials.”

Lee has long been interested in developing drugs for diseases that have no treatment. Fibrosis is one of those conditions. Marked by excessive scarring and overgrowth of tissues, fibrosis can affect virtually every type of tissue in the body. Scleroderma is an autoimmune disorder that features skin fibrosis and in its most severe form can spread to other organs and can be ultimately fatal.

“We were interested in TRAIL because it’s a natural protein made by the body in response to inflammation and wound healing, and since our bodies already make it, we know it is well tolerated and probably won’t cause any side effects,” says Lee. In a report published a few years ago, Lee’s team overcame an initial challenge working with the TRAIL protein—it was difficult to work with and too unstable—and engineered a version of TRAIL, TLY012, that works like the original but is much more potent and stays around longer in the body.

Then, a scientific literature search by a lab member uncovered a long-ago published paper showing that TRAIL caused specific cells in the liver to die. Those cells, says Lee, are the liver’s equivalent of the skin cells, which are the root cause of scleroderma. It turns out that all tissues have cells in place to manage a healing process in case of injury. An extreme variation of this wound healing process causes fibrosis and the hallmark skin hardening of scleroderma.

As a next step, from patients with scleroderma the researchers isolated specific skin cells called human dermal fibroblasts to see if treating them with TLY012 would cause them to die, similar to what was reported in the liver back in 2003. After six hours of TLY012 treatment, these cells started dying, but TLY012 did not affect human dermal fibroblasts from patients without scleroderma.

“This was encouraging to us because it both confirmed that the skin and liver cells are equivalent and it showed us that treatment with TRAIL can cause these diseased cells to die while sparing healthy cells, at least when grown in a dish,” says Lee. So his team next tested TLY012 in two different types of mice.

In the first type of mice, the researchers injected into the skin daily for three weeks a compound known to cause severe inflammation. After three weeks, these mice showed signs of severe fibrosis similar to scleroderma. The team then injected these same mice every other day for three weeks with TLY012 and compared their skin with fibrotic mice that had received no treatment. They found that cells not associated with fibrosis were fine, but cells in the areas of fibrosis were dying.

The second type of mice they tested were genetically engineered to have the skin fibrosis associated with scleroderma but without the severe inflammation that produces the fibrosis. These mice develop scleroderma-like skin when they’re 4 to 5 weeks old. The researchers started treating the mice at 5 weeks of age every other day for five weeks and then evaluated the skin of the treated versus untreated mice. They found that untreated mice had thickened skin and collagen deposits similar to human scleroderma, whereas treated mice showed molecular signs of dying cells with significantly less skin fibrosis. “These data say to us that TRAIL could potentially reverse skin fibrosis to near normal skin,” says Lee.

“Because the TRAIL protein can cause cancer cells to die while sparing normal cells, it was originally pursued as a cancer therapeutic. But likely because cancers are varied in composition, TRAIL was never shown to have much success in changing the course of cancer in humans,” says Lee. “We discovered that TRAIL plays a critical role in wound healing and fibrosis in the body, thus offering more attractive therapeutic opportunities for the treatment of fibrosis.”