World Mental Health Day 2018: Childhood anxiety and depression can have adverse effects if left unchecked, ranging from substance abuse, delinquency, poor performance in school, and a host of other complications.

Mental illnesses have existed from time immemorial, but for most of history, which includes much of medical history, they have often been considered “moods” or “feelings” as opposed to serious health conditions, which they truly are. Much has changed with regard to people’s perceptions towards mental health over the last few years, in large part due to numerous high profile suicide cases by celebrities suffering from depression like Anthony Bourdain, Robin Williams, to name a few. As a result, what was once a taboo subject is now finally being discussed in the open. But for all the advances in society’s openness to discuss the issue of mental health, one very important demographic has been left out—children.

Anxiety is common during childhood; the trouble begins when a prolonged phase results in the child actively avoiding certain activities or places. This is called an anxiety disorder, and is usually accompanied by other closely related conditions like depression and obsessive compulsive disorder. According to the Child Mind Institute Children’s Mental Health Report, 80 per cent of children with a diagnosable anxiety disorder and 60 per cent of those with depression get no treatment for their conditions whatsoever. The problem lies in the fact that mental illnesses are largely viewed as issues that affect adults, when in reality, they can affect anyone, at any time, for no conceivable reason, and children are no exception. These problems are further compounded by the fact that “odd” behaviour in children is often viewed as indiscipline or them “just going through a phase” when in reality, they are exhibiting signs of mental illnesses. 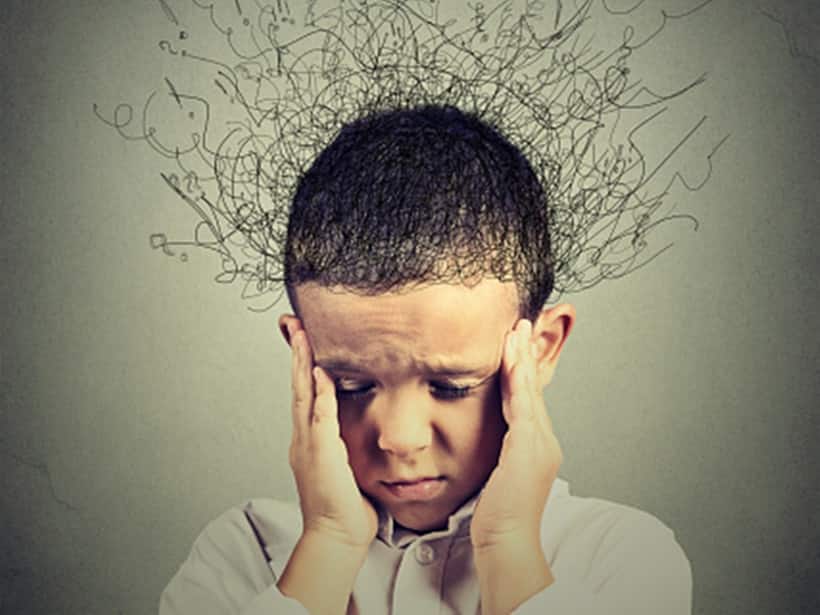 Here are some of the most common mental illnesses affecting children:

GAD is characterised by excessive worrying, usually pertaining to family issues, performance at school and interpersonal relationships. Children who suffer from it often seek the approval of others to an unhealthy degree and are excessively unforgiving towards themselves. It is estimated that GAD affects over 3 per cent of the US population at any point, of which less than half receive treatment. And this is growing in India too.

A child is said to be suffering from panic disorder when they experience two or more panic attacks over a short period of time. A panic attack is a period of intense anxiety or fear, an increased heart rate, profuse sweating, shaking, and shortness of breath. Panic Disorder affects up to 6 million adults in the United States, and is more likely to occur in women than men.

This disorder is said to exist when a child experiences anxiety or apprehension whenever a parent is out of sight. This behaviour, while common in all young children, is indicative of Separation Anxiety Disorder if it persists beyond late childhood.

Social Anxiety disorder is characterised by the intense fear of social situations like performing in front of crowds or in more extreme cases, even speaking to peers. It can severely restrict a child’s social interactions, which leads to further complications with their development and persist well into adulthood. Social Anxiety Disorder is one of the most common anxiety disorders, affecting 15 million adults in the United States.

This disorder affects children and teenagers and can continue into adulthood if not diagnosed earlier. It is the most commonly diagnosed mental disorders among kids. Children experiencing this might be hyperactive and unable to control their impulses, or they may have trouble in paying attention. These behaviours interfere with school and home life.

While anxiety disorders may seem terrifying, confusing, and unavoidable, there is a lot one can do to help their child cope with their condition, and eventually learn to lead a perfectly normal, happy life.

Here are a few simple steps to overcoming mental illness:

Exercise releases serotonin, a mood regulating hormone that increases the sensation of bliss and reduces feelings of anxiety and depression.

Simply talking to a well-grounded expert and gaining knowledge of various exercises to cope with feelings, and anxiety and depression is an excellent way to reduce their impact in daily life.

The last few years have seen enormous strides in anti-psychotic medications, when therapy is not as effective; medicine has proven to be an excellent second line of defence against mental illnesses. Like any medication, anti-psychotic drugs should only be taken after consultation with a qualified psychiatrist.

Yoga and meditation are proven to reduce feelings of anxiety by calming the mind and releasing serotonin, like therapy, there are no physical side-effects, which make them ideal for children.

Childhood anxiety and depression can have adverse effects if left unchecked, ranging from substance abuse, delinquency, poor performance in school, and a host of other complications. Fortunately, it is perfectly resolvable, provided that parents, teachers or guardians are able to identify symptoms and provide their due support.

(The writer is Consulting Physician and Diabetologist, Saifee Hospital.)