Another one! Hoda Kotb is now the proud parent of a second baby girl, Hope Catherine Kotb.

After welcoming Haley, now 2, to her family in 2017, the Today Show cohost announced that she had adopted again on Tuesday, April 16. 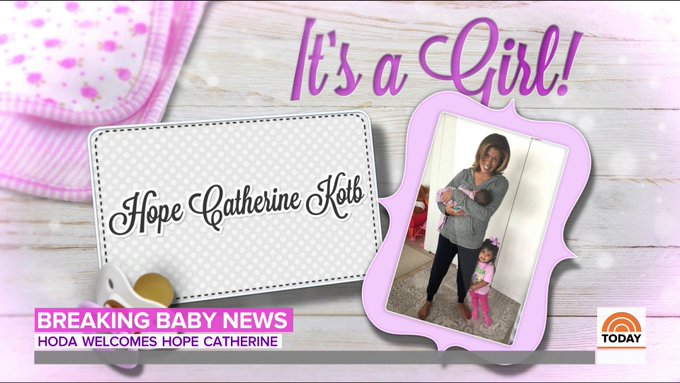 This use may include analytics, personalization, and ads.

.@hodakotb tearfully recounts the moment her second baby girl was put in her arms.

“She is laying on the pillow right now,” the journalist, 54, told her cohosts over the phone. “I’m feeding her. I can’t believe it. Like, I’m sitting here and, you know, you think that maybe you have gotten what you deserve, but man, I’m so happy she is here.”

As for Haley, Kotb said the little one is “digging” big sisterhood. “At breakfast she was trying to feed her raspberries,” the You Are My Happy author said. “I was like, ‘Not yet, babe.’ She was literally marching around saying, ‘I’m a big sister.’ … She did try to crawl into her bassinet.”

The TV personality added of the moment they met: “[Haley] literally walked up to her and looked at her and goes, ‘Hope.’ It was, like, one of those moments.”

As for meeting her second daughter for herself, the Oklahoma native said it was “amazing” even though she thought her heart was “full” before. “My God, my heart just grew ten times,” she said. “I just can’t believe it’s happening, y’all. I can’t.”

Kotb called into the Today Show in February 2017 to reveal that she had adopted Haley Joy.

“She is the love of my life,” she said at the time. “I didn’t know my heart could feel like this. This is a moment in my life that I never thought would happen, and here it is, happening to me.”

Kota was married to Burzis Kanga from 2005 to 2007, and she announced in October 2016 that she was moving in with Joel Schiffman, after three years of dating. She confirmed last month that her boyfriend, 61, is Haley’s father on The Wendy Williams Show.