The many Dussehras of India: Celebrating other forms of Durga

Navaratri chiefly celebrates Durga and Nava Durga. But people across the country also honour local or regional forms of the goddess, especially on Dussehra. It was on the tenth day of her battle with the buffalo-demon Mahishasura that Durga (as Katyayani) had killed him. This victory of good over evil is celebrated in unique ways on Dussehra. People believe that beginning new tasks on this day brings good fortune. Some people perform a pooja of their vehicles and appliances (fridge, washing machine, etc.).

Most people worship the goddess (as Durga, Lakshmi and Saraswati) and her sons on this day. They believe that the goddess and her sons visit her parents during Navaratri. Since devotees are also her family, she lives in their homes too. On Dussehra, the three deities leave for their home on Mount Kailash. People make sacred food offerings, take their idols out in a procession and finally immerse them in a river or lake. As the clay idols dissolve in the water, they become soil or the earth once again. Some believe the family travels back to Mount Kailash through water.

Navaratri chiefly celebrates Durga and Nava Durga. But people across the country also honour local or regional forms of the goddess, especially on Dussehra. Many moons ago, Khandoba (an avatar of Shiva) and Mhalsa Devi (a form of Parvati) had fought two demon-brothers named Mani and Malla at a place called Kade Pathar near Jejuri city in Maharashtra. When the two deities began living there, a Khandoba temple was built at the site. For years, a devotee from a nearby village visited the temple every day. But when he grew old, he requested the deities to come and live in his village.

They agreed, but told the old man, ‘Keep walking. Don’t look back, or be iffy, for we’ll be gone in a jiffy.’ The old man accepted the condition.

But, after walking for a while, he couldn’t help but think, Are they still following me? I should turn and check just once! The moment he turned, the gods vanished, leaving behind two egg-shaped stones. And so, at that very spot, the second and new temple called Jejuri Gadkot was built. Every year, on the day after Dussehra, the two sets of idols (from Kade Pathar temple and Jejuri Gadkot) are carried by devotees in huge palanquins to a meeting point. Throughout, the devotees scatter turmeric powder (which is dear to Khandoba) and distribute ‘apta’ leaves. The hilly path and the many steps that they must climb on the way are a task for the group from Jejuri Gadkot. But the bigger, and more amazing, feat is carrying the palanquin that weighs around five to six tonnes, while making the difficult journey on foot. That’s like lifting a fully grown African elephant and carrying it across a hilly path!

Once the meeting of the deities is over, the palanquins are taken back to their respective temples. At Jejuri Gadkot, then begins a strange sword-lifting competition called Mardani Dussehra. People try to show how strong they are, by lifting this sword (which weighs around 42 kg) with their mouth or teeth, or holding it in one hand for the longest time.

Every region of Karnataka celebrates Dussehra in a special way. A parade of ten mantapas (floats), each reaching a height of around 25 ft, makes up the main event at Madikeri Dasara-just like the parade of floats you see on Republic Day. Every Dasara float has a large stage, on which life-sized idols rotate and move, depicting a mythological story (mostly related to Durga and Nava Durga).

In Mangaluru, young boys and men paint their faces and bodies to look like a tiger. Dressed as tigers, they dance and perform acrobatic stunts in honour of the local goddess Sharada (a form of Saraswati). Known as Hulivesha (in Kannada, huli is ‘tiger’ and vesha is ‘dress’), this dance is a tribute to the goddess from her vahana-the tiger!

Mysuru gets its name from Mahisha, for he is said to have lived and ruled here. So, Mahisha ooru became ‘Mysuru’ over time. Mahishasura’s statue stands tall near the Chamundeshwari Temple in Mysuru. People believe that he was slayed by Durga in the form of Chamundeshwari. Mysuru Dasara, which is the Nadahabba (state festival), includes sports competitions, food festivals, flower shows and folk performances. The Mysuru Palace is lit up with around 1,00,000 lights. The highlight is Jumbo Savari, a procession of elephants where the lead elephant carries Chamundeshwari’s idol.

On Vijaya Dashami, people in Karnataka, Kerala and Tamil Nadu follow a tradition called Vidyarambham (beginning of knowledge). Children below the age of five begin to learn music, dance or language. Kids write the first few letters of the alphabet (in their mother tongue) on grains of rice spread out on a plate. Since Ganesha is the god of writing, his name or a Ganesha mantra is written on the tongue of a kid, with a gold ring, by a priest, guru or an elderly family member.

During Dussehra, a mass fancy dress event takes place in Kulasekarapattinam town, outside the Mutharamman Temple (dedicated to Goddess Mutharamman). Dressed up like divine beings (especially the Nava Durga), with multiple fake hands jutting out of their painted bodies, several devotees beg for alms. This act urges them to always lead a simple life, just like the goddess.

On Dussehra, the Kanaka Durga temple in Andhra Pradesh holds a splendid procession of the goddess over the waters of the Krishna River. This event is called Teppotsavam. Kanaka Durga’s idol is taken around the river thrice, in a decorated, lit-up, swan-shaped boat called Hamsa Vahanam. Many people gather around dusk on the banks of the river to watch this spectacle.

In Chhattisgarh’s Bastar region, Navaratri and Dussehra festivities together last for 75 days! Since people believe that Sati’s daant (tooth) had fallen in this region, they call the goddess Danteshwari! The highlight of Bastar Dussehra is the procession of Danteshwari’s idol on an eight-wheeled chariot, which is almost 25 ft long and is pulled through the streets by around 2000 people.

In Sikkim, Meghalaya and Mizoram, the festival is celebrated as Dashain by Nepal’s Gorkha community, who came to India during the British rule. At the time of ghatasthapana, instead of seven or nine types of seeds, the people only sow jamara (barley) seeds. Linge Ping, a traditional bamboo swing (rarely seen or used nowadays), is specially built for Dashain. Interestingly, children and grown-ups must stand on it, not sit, to make it swing. On the festival’s seventh day, the people observe ‘phoolpatti’, a unique practice where leaves from nine types of plants are picked and worshipped. These are immersed, along with the jamara shoots and the idol, on the last day. 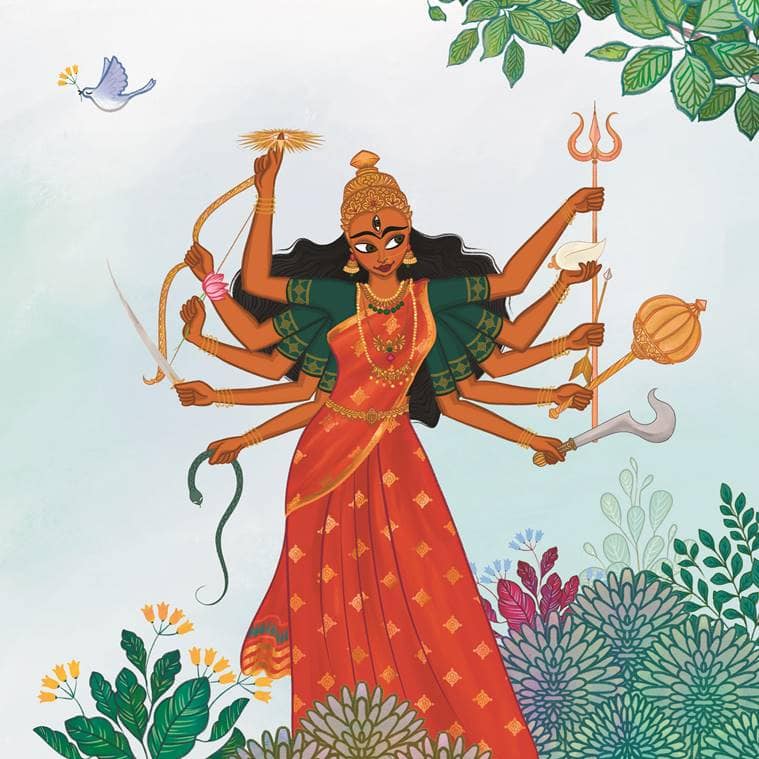 People in the eastern states, especially Odisha and West Bengal, follow a similar tradition. On the seventh day of Navaratri, they perform the nabapatrika pooja, where ‘nine types of leaves’ are bathed with sacred waters and worshipped. Each type of leaf stands for a particular form of Durga: the banana plant symbolizes the goddess Brahmani, colocasia is Kalika, turmeric is Durga, jayanti represents Kartiki, bael stands for Shiva, pomegranate for Rakta Dantika, ashoka is Sokrahita, arum is Chamunda and rice stalks represent Lakshmi. These are tied together with the aparajita plant and draped in a saree, to look like a bride. People believe that this bouquet of leaves, too, is Durga. They call this leafy form of the goddess Kola Bou (banana bride). With the goddess’s idol, the nabapatrika are also immersed in water on Dussehra or Bijoya Dashami.

Dussehra celebrations show how much the country’s people adore and respect the goddess. Be it as a demon-slayer, universe protector or boon giver, Durga is loved and worshipped by many. So, the next time you celebrate Navaratri, Durga, the Nava Durga, her other forms and her powers, you will know why all of them hold a special place in India.

(Excerpted with permission from Nava Durga: The Nine Forms of the Goddess by Nalini Ramachandran, illustrated by Priyanka Pachpande, published by Puffin Books.)