So Your Teen is Dating — Here's What You Need to Know

Does anyone ever forget their first real relationship? The butterflies. Thinking about that person 24/7. Obsessing over their every move and phrase. Daydreaming about spending next weekend, the entire summer vacation, the rest of your life with them. And then the unbearable heartache when it all came to an end. And if you thought navigating your first real relationship was tough, it’s possibly even harder for your teen. As well as all the same feelings and insecurities and desires and can’t-stop-thinking-about-them stretches of time between dates, your teen is facing the numerous added complications that are intrinsically linked to a relationship in the digital age. And as a parent, you probably (maybe) only just got the hang of their never-ending succession of distant crushes; what can you possibly do to help your teen through their first real relationship?

You may not be able to do anything about those teenage social media spats, but what you can do is make yourself available as a trustworthy confidante — without being too intrusive or cringe-inducing, of course. It’s a fine line, but if you get it right, you can stay connected with your teen even though you’re no longer the main object of their affection like you were when they were a toddler.

“Your teen may not want to share everything with you, the same way as you wouldn’t want to share your romantic interests with your parents,” licensed clinical psychologist Kevon Owen tells SheKnows. “But if they do share, don’t make them regret the decision.” In other words: No breaking their confidence to other family members. “Your teenager’s first relationship is not only going to teach them how to be in a relationship; it’s also going to teach them how their family will handle their first relationship,” says Owen. “Keep the doors open.”

And when it comes to sharing, psychotherapist Emily Roberts warns parents not to give advice — or launch into a “when I was your age” monologue about their own dating experiences — right off the bat. “Sometimes, parents want to share too much right after their teen is vulnerable. But being vulnerable is exhausting, and they may not have the energy to hear you yet. And that could lead to a potential argument,” she tells SheKnows. Her advice? “Instead of recounting your high school relationships, ask if they want to hear about it sometime rather than that moment; it leaves the door open for the next conversation.”

Roberts also warns parents against expressing any judgments about their teen’s partner. “Many young women I work with have a lot of anxiety about talking to their parents about romantic relationships, even as adults, due to early experiences as teens,” she says. “Sarcasm is something adults use often; understand that your teen takes it as invalidation. Saying things like, ‘You really like that guy?’ makes your teen feel like their feelings are wrong.” Plus, it acts as a barrier to communication, meaning your teen is unlikely to come to you the next time they have something they want to share. 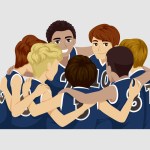 My Tweens Don't Play Sports — Is it Too Late to Start?

If you’re concerned that your teen is too young or too immature to start dating, resist the temptation to shut down the conversation with, “You’re too young.” By all means, consider your child’s age — but also consider their developmental age (how old they act, their emotional maturity). Both can be indicators of relationship readiness, licensed marriage and family therapist Carrie Krawiec tells SheKnows. “Ask your teen what they think being in a relationship at their age means, and avoid the impulse to be judgmental or disparaging; they’ll only become defensive, dishonest, or hit you with countless reasons why you’re wrong.”

Instead, use your teen’s response to guide your ideas of what age-appropriate relationship behaviors are (as well as age-appropriate ways of coping with the feelings that first relationship might trigger). As part of the ongoing conversation, explain to your teen what you expect from them — for example, ongoing socialization with other peers (in other words, they shouldn’t ditch their friends for their date), continued interest in and commitment to their classes and extracurricular activities, keeping bedroom doors open at all times, etc.

When you both set out your expectations clearly, you and your teen know where you stand, and it feels more like a two-way conversation than a parental lecture. “You can easily monitor and track whether your teen is meeting your expectation and their own stated values about an age-appropriate relationship,” says Krawiec.

So don’t panic about your teen’s first real relationship (Are they having sex? Are they going to get dumped? Are they going to be led astray?!). Instead, try to see it not only as an inevitable part of life, but also as a learning experience for both of you — and an opportunity to guide your teen toward making healthy, positive relationship choices. A big part of this is ensuring they know their rights in a relationship, says Roberts.

“My teen patients often say that their parents told them they don’t have to date someone if they don’t like them, etc., but they never discussed the other crucial rights,” such as consent, she reveals. “By helping your child define their boundaries and set their values, and reminding them that they have a voice and rights in a relationship, you can help them make more confident relationship choices.”

Remind your teen that their rights in a relationship include:

Remember, every teenager is different, every relationship is different, and your own relationship experiences are unique to you. There’s no rule book when it comes to handling your teen’s first dates — or their first breakup. But with patience, love, honesty and gentle guidance, you can help keep your teen on cloud nine for as long as possible (or at least be the person they want to catch them when they come crashing down).