A lot of pregnant women experience swollen gums, inflammation and even bleeding of gums.

Pregnancy is said to be one of the happiest phases in a woman’s life. The female body goes through a number of changes over a period of nine months. However, it is widely known that women experience frequent hormonal fluctuations during their pregnancy.

The fact is that the mouth is vulnerable to several oral health risks during pregnancy. Dietary changes caused by cravings for particular types of foods, especially sugary and sweet foods, result in dental caries, which may lead to several bacterial infections or loss of bone structure over time.

In some cases, complications arise during pregnancy due to an increased build-up of hormones such as oestrogen and progesterone, thus increasing the risk of developing dental problems like gingivitis and other periodontal diseases along with dental caries.

A lot of pregnant women experience swollen gums, inflammation and even bleeding of gums. This alarming condition, known as ‘pregnancy gingivitis’, may also prevail, mostly in the first trimester. This occurs as the increase in hormones exaggerates the way gums react to plaque build-up. Gingivitis in pregnancy is mainly caused by bacterial plaque, though pregnancy may further increase the body’s susceptibility to fight oral infections and its ability to repair and maintain soft tissue in the mouth. This condition may cause inflammation and even bleeding in gums, which can worsen and turn into periodontitis if left untreated for a period of time.

Periodontitis, subsequently, can cause the bone to erode along with other supporting structures, eventually leading to tooth loss. A study conducted by the Dental Journal of Advanced Studies states that ‘pregnancy gingivitis’ is estimated to occur in over 30 percent of pregnant women, and untreated gingivitis leading to periodontal issues can occur in 5 to 20 percent of pregnant women. 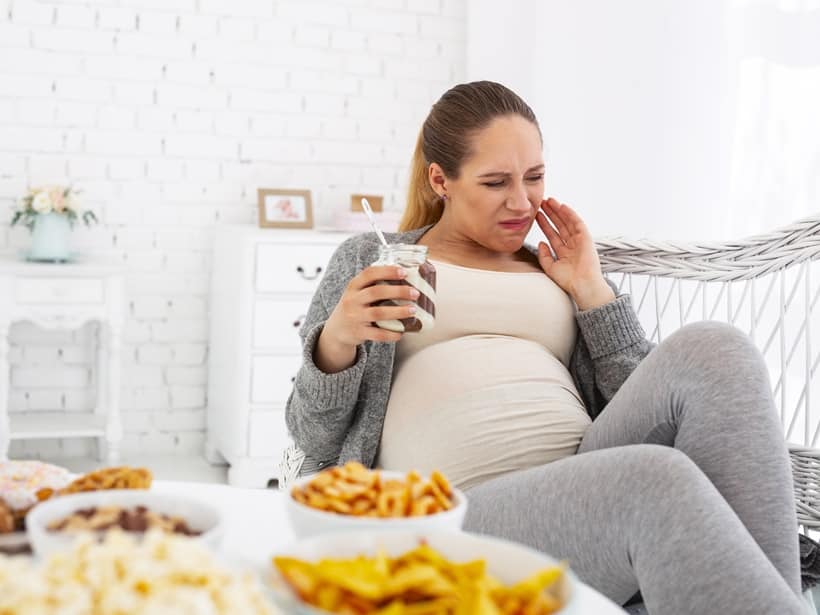 Doctors advise that a nutritious and well-balanced diet including leafy greens, good proteins, vitamins A, C, D and calcium should be consumed since what your eat during pregnancy affects the baby’s development as well, especially between the third and sixth months of pregnancy.

Another peculiar factor that can adversely affect oral health during pregnancy is nausea and vomiting, the most common symptoms. Constant purging and vomiting can lead to tooth erosion which can weaken the bone structure and may cause tooth loss in the future. A study conducted on Dental Erosion Patterns by the Australia Dental Journal suggests that pregnant women should “have a drink of milk or water following a vomiting episode and not brush their teeth immediately after vomiting.”

Schedule a visit to the dentist

Brushing twice a day for a couple of minutes, cleaning between teeth regularly using dental floss, regular visits to the dentist and consuming a balanced diet are some of the best ways to ensure a healthy and happy pregnancy without any unreasonable worry about complications.

(The writer is a periodontist at Clove Dental.)