The life of a one-year-old kid is challenging. There are so many things to look at, and for some reason, everything that’s not food just seems so darn tasty. Example A: Fixer Upper star Joanna Gaines filmed her son Crew thinking about eating rocks and posted the hilarious results to Instagram Stories.

In the next video, little Crew, who recently celebrated his first birthday, brings a garden rock up to his mouth before deciding that chomping down on the hard snack might not be the best idea given his limited number of teeth. “He wants to so bad though,” Gaines added. 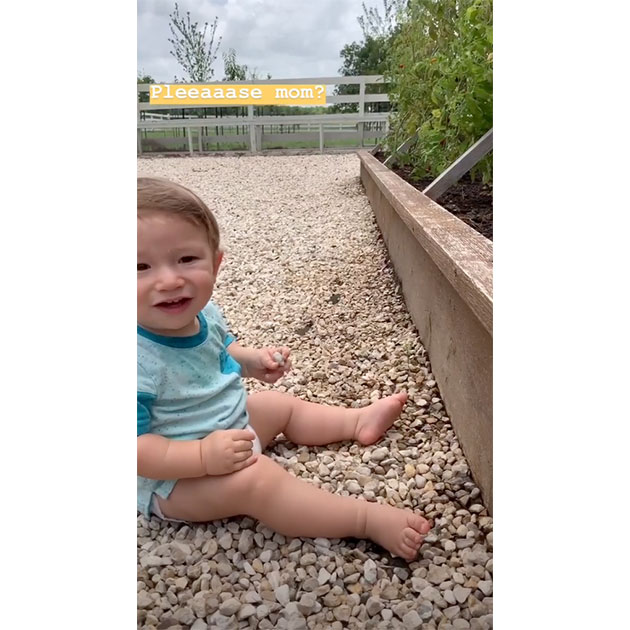 Over the next few posts, little Crew clearly grew more frustrated as he grabbed more rocks, lifted them, and, ultimately, threw them down in frustration. “I told him playing with rocks is more fun than eating them,” Gaines wrote, adding, “‘Oh but mom it’s soo hard not toooo.’” In all fairness, those rocks do look pretty delicious!

While no medical professional would ever come forward in favor of kids eating rocks, it’s by no means uncommon for babies to want to put everything in their mouths. In fact, a child’s desire to place things in her mouth is part of healthy development and indicates both curiosity and intelligence, according to the American Academy of Pediatrics. Touching, feeling, and tasting things also helps babies with their motor skills.

Of course, parents should take precautionary measures while their children explore. Keep any dangerous items, such as small plastic pieces, plastic bags, and, yes, even rocks, out of a child’s reach to prevent choking and suffocation. Parents should also supervise playtime to minimize these risks.

It’s no wonder Crew waddles on the wild side. Both of his parents are adventurous and enjoy taking risks. Recently, the couple launched a new summer home collection, announced they’re working on yet another cookbook, and are gearing up for their new TV station. To top it all off, they still spend hours on their farm with their human (and animal) kids. At this rate, we wouldn’t be too surprised to see Crew joining his dad for Demo Day before he’s out of diapers — while carefully guarded away from any tempting rubble, of course!