Erin Andrews Opens Up About 7th IVF Round: 'I Am Not Ashamed'

Erin Andrews is sharing her IFV journey — her 7th one — and she’s longer embarrassed about it.

On Wednesday, the sportscaster shared an essay on the publishing platform Bulletin detailing her “time-consuming and emotionally draining” fertility trek while juggling her high-profile career as an NFL reporter. “On top of being on a special assignment last week where I was sometimes working up to 14 hours a day, I also had to set aside time for IVF treatment,” she wrote. “…This is my 7th one, and I’ve been going through these treatments since I was 35 years old.”

In 2017, Andrews wed NFL player Jarret Stoll, one year after a cervical cancer diagnosis (for which she had surgery), which forced the couple to take a “huge step” together. “We hadn’t even been discussing marriage,” she told Health in 2017.  “We hadn’t discussed babies! It really puts things on the fast track for you — because you have an oncologist saying to you, ‘We highly recommend that you guys do your embryos right now, freeze them.’” Andrews had frozen her eggs years prior and did in vitro fertilization (IVF), the process of retrieving eggs, fertilizing them with sperm outside the body, then placing them in the uterus.

Now, at 43, she wrote, “…My body is kind of stacked against me. I have been trying to do IVF treatment for a while now, but sometimes it doesn’t go the way you want it. Your body just doesn’t allow it. Every cycle is different in a woman’s body, so some months are better than others. When I heard this was the best time to go through another treatment, I had to figure it out all over again. How am I going to juggle this treatment on top of my work schedule? I got so stressed out. When this happens, it really makes you question: is it the future of my family or is it my job?”

Andrews wrote that working in sports — a field generally commanded by men — she hesitated to speak publicly. “I decided that this time around, I would be open with my show producers about having to come to work a little later than normal because I was attending daily fertility appointments. And I am thankful I did it. They encouraged me to be open about it because this is real life. It’s not like I’m leaving to go take a hot yoga class, I’m trying to have a baby. I am not ashamed, and I want to be vocal and honest about this.” 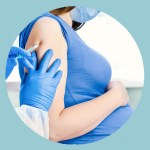 The Covid Vaccine May Affect Your Period — But No, It Doesn't Cause Infertility

And she’s found solidarity in her openness. “It can sometimes be embarrassing when you are in the waiting room and they say your name out loud. It makes me think, ‘I want this to be quiet, I don’t want people to know, but I don’t care anymore! It sucks, but I am right there with all these other women in the waiting room. It’s a team that no one wants to be a part of. We’re all going through this and having a tough time. It can be so isolating, but in reality, we are all there together.”

Andrews also expressed the emotional toll of IVF treatments, which don’t always work the first time. In 2016, research published in JAMA found that while people often stop trying after three or four cycles, it could be advantageous to continue — while the live-birth rate for the study subjects’ first try was 29.5 percent, the balance tipped to 65 percent by the sixth go-around, although there were distinctions depending on whether the woman used her own eggs and her age.

“You feel like shit. You feel bloated and hormonal for a week and a half,” she wrote. “You could go through this whole experience and get absolutely nothing out of it — that’s the crazy part. It’s a ton of money, it’s a ton of time, it’s a ton of mental and physical anguish. And more times than not, they’re unsuccessful.”

Those circumstances could depict why infertility remains a closed-door subject in our society. “Because maybe we feel as if this is something we have to do, and we don’t want to jinx it,’” she mused. “On the other hand, we can also feel like we’re a failure as females or to our partners. But we are all warriors for going through this! The fertility clinic can sometimes be so full, it’s heartbreaking, but we really aren’t alone here. You never know who else is going through this; it could be another co-worker or the person making your coffee every day. There are more people than you think.”

“Why am I keeping this such a secret when this is just a part of our lives?” she wrote. “Instead of feeling ashamed, we need to give ourselves more love. It freaking sucks, because it can seem like it’s such a lonely thing. There are so many of us going through this though, and it’s just not talked about.”