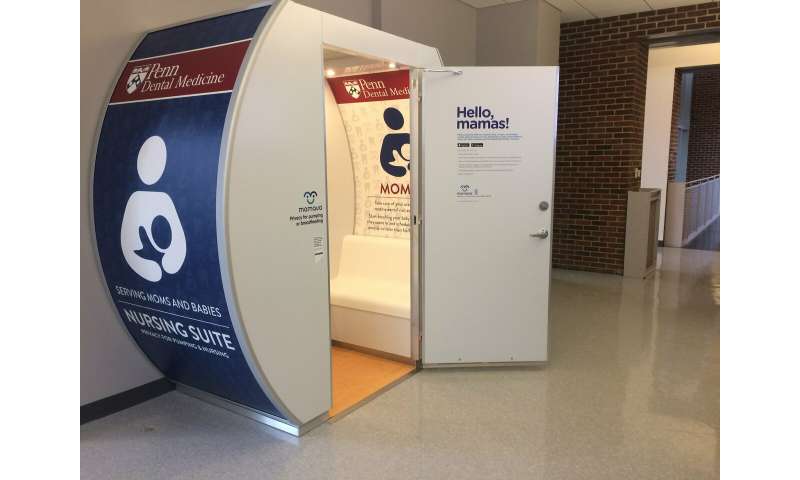 A college campus may not seem like a place that requires extensive lactation support. But while most undergraduates don’t have children, several populations within these higher-education environments—graduate students, faculty, staff, visitors—may need access to breastfeeding and pumping spaces.

Diane Spatz of the University of Pennsylvania School of Nursing and the Children’s Hospital of Philadelphia has been advocating for and researching the needs of breastfeeding moms for nearly two decades. Most recently, she and colleagues from the Stuart Weitzman School of Design and the Center for Public Health Initiatives, both at Penn, and the Society for College and University Planning (SCUP) turned their attention to the availability of such a resource on college and university campuses.

In a study published in the journal Breastfeeding Medicine, the researchers found that nearly all of the 105 institutions surveyed had a least one dedicated lactation space. About two-thirds reported having a policy for creating such spaces, but only about a quarter included them in campus construction standards.

“There are many different types of women who may need to access lactation space when they’re on a university campus. That’s why this work is really cool and so important, because there is definitely a need,” says Spatz, a perinatal nursing and nutrition professor at Penn who also runs CHOP’s lactation program. “Beyond that, we’re getting these ideas into the hands of the people making the decisions about space on campus. On the majority of campuses, no one is thinking about this as a standard.”

The project emerged after a student of Spatz’s asked 139 universities across the country whether they had lactation policies in place for their students. Just five percent did. So in 2015, when Dare Henry-Moss joined the Penn master’s in public health program as a student, the issue was already top of mind for Spatz. The two began working together.

At around the same time, Spatz met Joyce Lee, an architect who teaches at PennDesign and is a faculty advisor at the Wharton School Initiative for Global Environmental Leadership. Lee also works closely with SCUP, which expressed interest in pursuing research on the subject. Lee connected everyone and the project came to life, spurred by a mutual excitement for what all parties saw as a crucial yet unexplored topic.

“For so long this type of gender-specific space has not been in any best-practice standards,” says Lee, president of design firm IndigoJLD Green Health. “Now we’re creating an environment where presidents, provosts, real estate managers, planners, designers can discuss it as a network of health-promoting spaces. An interdisciplinary collaboration is critical to getting this work done.”

So, too, are solid numbers, so the research team created a survey that asked participants who on campus was involved in planning for and funding lactation spaces, how many there were, and whether the institution tracked use of the space. They also went further in depth, asking what percentage of the campus population lived or worked within a seven-minute walk of a lactation space, and how many of the rooms had features such as a locking mechanism, a hospital-grade pump, or personal storage for users.

Across the country, representatives from every campus size—”small” schools with fewer than 5,000 undergrads to “very large schools” with more than 30,000—responded. They came from public schools and private, some with graduate divisions, some without. Their responses painted a clear picture about how universities and colleges across the U.S. think about this issue.

Some do more than others, yet even those places already moving forward have room to grow. SCUP and the researchers hope to help in that regard, not simply by publicizing the statistics their work revealed, but also with a resource page they created that lives on the SCUP website. “Now there’s a place where a campus administrator interested in doing more can go,” Spatz says. “This is often looked at from a human resources standpoint, as an employee benefit, but it’s not just that. It’s a bigger-picture item.”