While you might first think of Chip Gaines as the contractor extraordinaire on Fixer Upper who liked to physically hurl his whole body through walls on Demo Day, it turns out the dad of five has a much quieter side as well. His wife and Magnolia Network partner Joanna Gaines revealed his more feminine side with a sweet Father’s Day post, praising his dad skills with a photo of him getting pampered by daughters Ella, 14, and Emmie, 11. 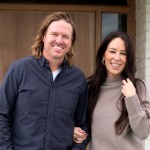 Are Chip & Joanna Gaines Opposed to Teaching About Racism in the Schools?

Nope, it wasn’t a massage or breakfast in bed for this girl-dad. In the Instagram pics, Chip is relaxing on the couch watching baseball on his laptop as he let his daughters braid his hair. (Chip and Joanna, who recently celebrated their 18th wedding anniversary earlier, also share sons Drake, 16, Duke, 13, and Crew, 2.)

“You’re the best kind of dad,” Joanna wrote in the caption. “The kind that lets his daughters french braid his hair right before you take them shopping (even if the College World Series is on). We sure love you @chipgaines.”

Are we the only ones who hope that big blue scrunchie on Ella’s wrist secured the end of that new do’? Also, way to go, girls! That’s top-notch braiding, and we love the way it really stands out on Dad’s noggin. Also, Chip’s hair is getting really long! Has he been growing it out during the whole pandemic? Inquiring minds want to know.

We’re such fans of fathers who are open to connecting with their daughters in all kinds of ways. Channing Tatum, for example, began focusing on being the best “girl dad” he could be after splitting with his wife Jenna Dewan, and his new children’s book, The One and Only Sparkella, was inspired by Everly and written based on some of their experiences during quarantine together.

But back to Chip: Later in the day, he poked fun at his wife in his own cheeky Father’s Day post, but with unbraided hair, unfortunately.

“Looks like @joannagaines is enjoying her Father’s Day! meanwhile.. I’M STARVING,” he joked in the caption of the photo, which showed Joanna asleep on the couch under a blanket while he mugged an annoyed look for the camera. Very funny, Chip!

These are some of the reality-TV alumnae we love to follow as they tackle motherhood.