Renalase is a relatively recently discovered kidney protein connected to chronic kidney disease and blood pressure disorders. It functions by metabolizing catecholamines and similar substances, such as adrenaline and dopamine. 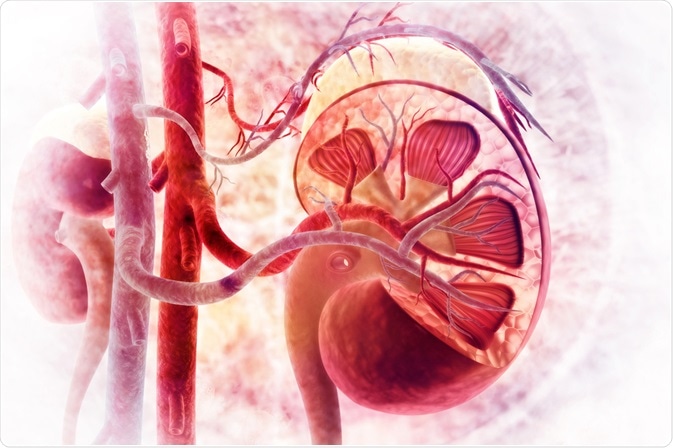 The skeletal muscles express high renalase levels but might be due to their function in metabolizing catecholamine and thereby regulating the concentration.

Certain conditions can affect, or be affected by, renalase. For example, people with chronic kidney conditions such as end-stage renal disease (ESRD) have low levels or are absent from circulating renalase. Similarly, injections of recombinant renalase lower blood pressure.

Renalase is a flavoprotein, which means it depends on its flavin adenine dinucleotide (FAD) component to oxidase its substrates. As a FAD-dependent amine oxidase, the FAD cofactor is required for oxidation. It is believed to work by reduction of the FAD moiety, which then reacts with oxygen to produce a superoxide anion that can then oxidize catecholamines like adrenaline. This then results in the formation of aminochromes, such as adrenochrome and dopachrome from adrenaline and dopamine, respectively.

Since renalase was discovered in 2005, it has been implicated in a broad range of systems. It does not express well in commercial protein expression systems, which means studying its biochemical properties has been tricky.

One of the interesting aspects of the discovery of renalase is its interplay with other metabolic enzymes in the kidney. Previously, enzymes such as monoamine oxidase A (MAO) and catechol-O-methyltransferase (COMT) were believed to be largely responsible for catecholamine and specifically dopamine regulation.

Renalase is shown to have a larger effect on dopamine concentration, and also explains how renal dopamine levels are controlled. MAO and COMT are intracellular enzymes, whereas renalase can regulate dopamine after secretion.

Renalase is also the only known amine oxidase that is secreted into the blood to target circulating catecholamines. Catecholamines have a known role in heart rate and other vascular traits, which thus implicates renalase in cardiovascular activity. Studies on the infusion of renalase confirm this, which is believed to operate by catecholamine degradation which leads to decreased contractility of cardiac muscles and heart rate.

However, some theorize the cardiovascular effect is due to venous dilation and decreased venous return due to the decreased catecholamine levels.

Interestingly, renalase may account for links between conditions that were not previously understood. Renal disease has been associated with a significant increase in cardiovascular disease, which is one of the main contributors to the high death rate of kidney disease.

Some theories that have attempted to address this have noted that dopamine and noradrenaline levels are increased in patients with kidney disease. It has therefore been speculated that renalase can be a causative agent of this relationship.

Since its original discovery, renalase has been implicated in inflammation in various diseases. Specifically, it has been indicated to have anti-inflammatory properties in several disease processes such as acute kidney injury and acute pancreatitis. Given that a disordered inflammatory response is an important aspect of COVID-19’s pathogenesis, there is a theoretical link between renalase and COVID-19.

Some evidence exists to support this theoretical link, although no fully peer-reviewed studies have yet been published. When looking at COVID-19 patients in hospitals, low renalase levels in the plasma were associated with a higher chance of needing a ventilator and with worse overall survival. Furthermore, renalase levels in the blood were negatively correlated with several markers of inflammation, such as IL-6 and TNFα.

The interaction of renalase and inflammatory markers may, therefore, be a driver of the severity of COVID-19. Furthermore, the authors suggest renalase can be a useful biomarker to identify patients with more severe COVID-19 disease.

** This is a preprint and has not yet undergone peer-review or been published in an academic journal.

Sara is a passionate life sciences writer who specializes in zoology and ornithology. She is currently completing a Ph.D. at Deakin University in Australia which focuses on how the beaks of birds change with global warming.