Vitamins are a broad range of substances that the human body requires for normal functioning, such as metabolism and cellular repair. Lack of sufficient vitamins has been implicated in cellular diseases, such as cancers. 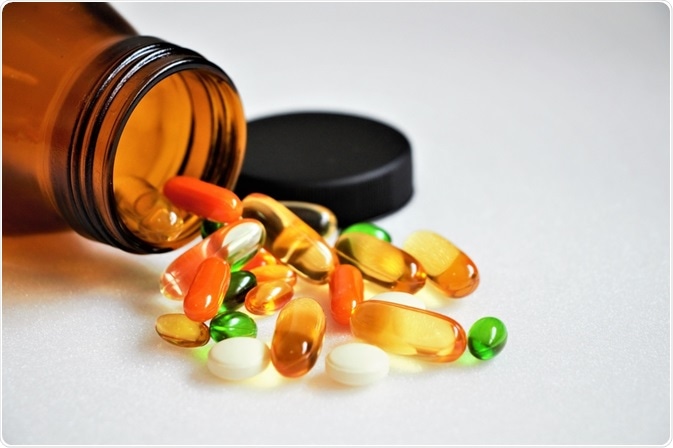 Most people are familiar with vitamins following an A-E naming system, such as vitamin A and vitamin B12. They are also grouped into other names, such as retinoids and cobalamin, respectively. Furthermore, vitamins can be known as fat-soluble or water-soluble, which influences if they can be stores and how often they need to be consumed.

Fat-soluble vitamins include vitamins A, D, E, and K, and can be stored by the body for later use, which means they don’t need to be consumed as often. Vitamin A, also known as retinoids and carotene, is needed for vision, bone growth, and the immune system, and are known to be antioxidants that can lower the risk of various cancers.

Vitamin D, or calciferol, is important for normal calcium and phosphorus levels in the blood, thereby helping in the formation of teeth and bones. Vitamin E, also known as alpha-tocopherol, is an antioxidant and protects vitamin A and lipids from damage. It’s also theorized to play a role in Alzheimer’s disease. Vitamin K, or phylloquinone menadione, is important for blood clotting by activating proteins and calcium.

B vitamins and vitamin C are water-soluble vitamins that need to be consumed regularly because the body is incapable of storing them for later use.

Vitamin B1, also known as thiamine, aids in converting food into energy and is essential for skin, hair, muscles, brain and nerve function. Along with B1, vitamins B2 (riboflavin), B3 (niacin), vitamin B7 (biotin), and B5 (pantothenic acid) also aid with digestion. Vitamins B2 and B3 are also needed for healthy skin, blood, and brain, whereas Vitamin B5 is needed for lipid production, neurotransmitters, hormones, and hemoglobin.

Vitamins B6 and B12, also known as pyridoxine and cobalamin, respectively, both help lower homocysteine levels and might aid in lowering the risk of heart disease. Vitamin B6 is also important in the production of serotonin and red blood cells and has a role in cognitive abilities and immune function. Vitamin B12 has a role in the production of new cells, breaking down fatty acids and amino acids, protecting nerve cells and helping to produce DNA.

Vitamin C, or ascorbic acid, has many different uses. It is believed to lower the risk of several cancers and protect against cataracts. It also aids in the production of collagen, serotonin, and norepinephrine. It can also act as an antioxidant and strengthen the immune system. Choline also has a role in the production of the neurotransmitter production acetylcholine.

One of the more famous vitamins is vitamin B9, also commonly known as folic acid. Folic acid is important for cell creation and thus critical for pregnant women to prevent damage to a growing embryo. It’s also believed to reduce colon and breast cancer risk and can lower homocysteine levels and heart disease risk.

The majority of vitamins can be found at adequate levels in regularly consumed food, such as vegetables and dairy. Differences in diets can mean some people are less able to meet vitamin requirements. For example, vegan diets (which avoid animal products) and diets that are low in fruit and vegetable consumption, can lead to different vitamin deficiencies.

Some human diseases or medications also interfere with vitamin absorption or function within the body. For these persons, supplementation may be required. For example, many elderly people require higher consumption of nutrients such as B6 and B12, because they are less able to absorb it from their food than younger people.

Vitamin intake can also differ depending on health state. It is recommended that all women of child-bearing age take folic acid since many women don’t know they are pregnant until a few weeks into the pregnancy. Folic acid is essential for early embryo and fetal development, and deficiency can result in serious developmental problems.

Vitamins have the following natural sources:

Sara is a passionate life sciences writer who specializes in zoology and ornithology. She is currently completing a Ph.D. at Deakin University in Australia which focuses on how the beaks of birds change with global warming.