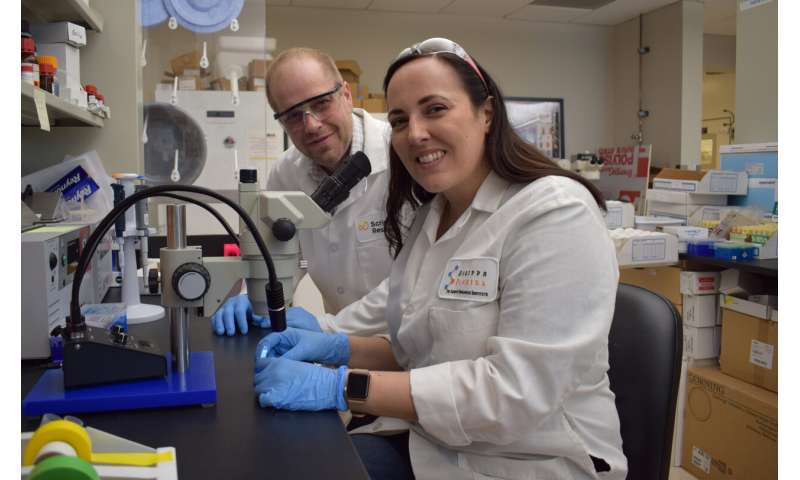 Learning to avoid negative experiences requires an interplay of two distinct brain circuits, one to interpret “Yikes!” and drive learning, and the other, unexpectedly, to dial in the strength of that memory, a new fruit fly study shows.

“This kind of gain control is probably present in many levels of the nervous system, in many organisms,” says Scripps Research neuroscientist Seth Tomchik, Ph.D., lead author of the study.

The human brain is comprised of a staggering number of neurons—about 86 billion, according to recent studies. Given that complexity, neuroscientists working to understand how learning and memory work begin with simpler model organisms. Humans and flies share a degree of fundamental biology, including reliance on the neurotransmitter dopamine in learning.

The fruit fly brain contains eight groups of neurons that produce dopamine. Three of them can be found in what’s known as the fly brain’s “mushroom body.” Humans don’t have an exact analogous brain section, but other brain regions perform similar functions. In Drosophila melanogaster, aka the fruit fly, the mushroom body is an area highly responsive to odors.

Past fly brain studies have shown that one of the dopamine-producing groups projecting into the mushroom body handles desire-inducing memories connected to odors. (“Mmmm, rotten bananas!”) while another guides avoidant behavior related to negative experiences. (“Yikes, dangerous banana smell!”)

To find out the role of the third group, referred to as PPL2, research associate and first author Tamara Boto, Ph.D., trained the flies with an experiment that involved exposing them to fruit-like odors while simultaneously giving them a mild electric shock.

Their conditioned response could be visualized under a microscope by adding a green fluorescent protein that releases light upon reacting to calcium. Calcium ions are released when neurons communicate. Stimulating the PPL2 neurons during the odor experiments changed the brightness of the fluorescence when presented with the odor, an indication that the structures involved in learning and memory had altered the degree of response.

“When we activated this PPL2 set of neurons, it would actually modulate the strength of that memory,” Tomchik says. “So we see there are dopaminergic neurons that encode the aversive stimulus itself, and then there is this additional set that can turn the volume up or down on that memory.”

The ability of PPL2 to strengthen the response was a surprise, Boto adds.

“I think it is amazing that there is this physiological effect that translates to a behavioral effect,” Boto says. “Dopamine is not likely to excite on its own, but the response is greater if it is paired with stimulation of this set of neurons.”

The study, “Independent Contributions of Discrete Dopaminergic Circuits to Cellular Plasticity, Memory Strength and Valence in Drosophila,” appears May 14 in the journal Cell Reports.

A next step will be exploring what stimulates PPL2 neurons and how their activity influences other neurons in the memory network, Tomchik says.

Studying the brain circuitry underlying experience, learning and memory in model organisms can offer insights into our own, more complex brains, insights that could help us understand issues like addiction, PTSD, depression and neurodevelopmental disorders, Tomchik says.