Sugars that coat proteins are a possible drug target for pancreatitis 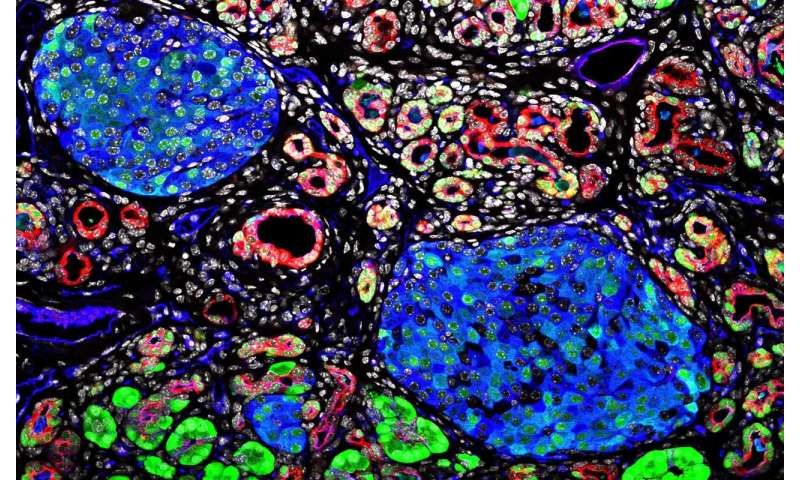 Pancreatitis is an inflammation of the pancreas that accounts for 275,000 hospitalizations in the United States annually. Patients who suffer from hereditary pancreatitis have a 40 to 50 percent lifetime risk of developing pancreatic cancer.

Dannielle Engle, a former Cold Spring Harbor Laboratory (CSHL) Cancer Center postdoctoral fellow who was recently appointed Assistant Professor at Salk Institute, studies the progression of pancreatitis to pancreatic cancer. She has focused on a potentially powerful biomarker, a chemical structure created by complex sugar molecules called CA19-9, since CA19-9 is elevated in patients with pancreatitis and pancreatic cancer. Now, Engle and her team provide the first evidence that CA19-9 actually causes the disease it was correlated with as a biomarker, and suggest that blocking this complex sugar structure could be used therapeutically to prevent the progression from pancreatitis to pancreatic cancer. Their findings are published in the journal Science.

In Cancer Center Director David Tuveson’s lab at CSHL, Engle investigated the properties of pancreatic cancer. She zeroed in on CA19-9, a complex sugar structure that coats many proteins but had not previously been ascribed with any particular function. A single enzyme controls the final step in production of CA19-9 in humans, but this enzyme is missing in rodents. Engle generated mice that produced CA19-9, and surprisingly noted that the mice developed severe pancreatitis. Engle’s findings position CA19-9 as an attractive therapeutic target for pancreatitis.

In mice, CA19-9 recruits the immune system to repair injuries from pancreatitis. Engle found that during this recruitment process, CA19-9 can also induce a cascade of biochemical reactions propelled by the release of deleterious digestive enzymes from the pancreas. This cascade opens a transformational gateway for cancer to develop and Engle also demonstrated that CA19-9 can dramatically accelerate the growth of pancreatic tumors.

A pending patent application filed by CSHL covering use of CA19-9 antibodies for the treatment and prevention of pancreatitis has been exclusively licensed to BioNTech, a German-based biotech company.