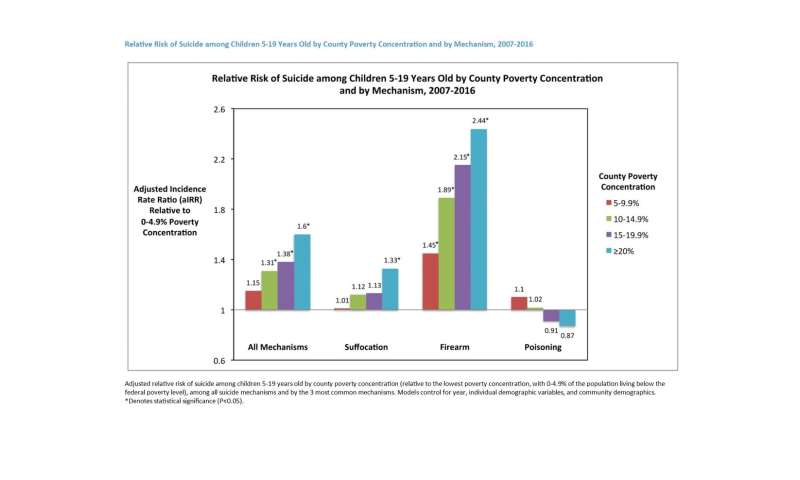 Research being presented at the American Academy of Pediatrics (AAP) 2019 National Conference & Exhibition shows that U.S. children living in counties with the highest poverty level are more than one-third more likely to die by suicide than those living in the least impoverished counties. The association is most pronounced for suicide by firearms.

An abstract of the study, “Pediatric Suicide Rates and Community-Level Poverty in the United States, 2007-2016,” will be presented on Sunday, Oct. 27, at the Hilton New Orleans Riverside.

Youth suicide has nearly doubled in the last 10 years, making it the second leading cause of death for children and adolescents between ages 10 and 19 years old in the United States.

For the study, researchers conducted a retrospective, cross-sectional analysis of suicides among U.S. children ages 5-19 years old from 2007 to 2016 using Centers for Disease Control and Prevention and U.S. Census data.

The researchers also performed subgroup analyses for the three most common suicide mechanisms: suffocation (including hanging), firearms, and poisoning. Suicide rates from hanging and overdoses were not different between the different county poverty levels. Among firearm suicides, the suicide rate increased with increasing poverty concentration, relative to the lowest poverty concentration counties.

Dr. Hoffmann calls for additional research into the association between youth suicide and poverty.

“We need to figure out why children living in higher poverty communities are at increased risk for suicide,” she said. “It could be related to unsafe gun storage, limited access to mental health care, or the build up of chronic stressors that children in poverty experience throughout the lifespan.”

“The majority of teen suicides by firearm occur in the home with a firearm owned by an adult in the home. Safe firearm storage (keeping the gun unloaded and locked separately from the ammunition) has been shown to decrease youth firearm suicide,” Dr. Hoffmann said. Safely storing dangerous medications is another proven way to help decrease suicide risk among children.