For the first time, scientists were able to specifically change the way the brain’s memory centers form new memories, according to a new Northwestern Medicine study.

Previous research from the same Northwestern Medicine scientists has shown it is possible to improve memory with stimulation, but this study is novel because it successfully identified how the brain changed—its level of excitability increased—in order to improve memory.

“If you think about the brain’s memory network as generating one unit of activity every time it tries to memorize a picture, brain stimulation made it so that now the same type of picture would generate two units of activity,” said senior study author Joel Voss, associate professor at Northwestern University Feinberg School of Medicine. “This increase in activity means that stimulation enhanced excitability, and that’s important because excitability is a marker for good memory formation.”

The study will be published Wednesday, Aug. 22, in the journal Science Advances.

The study’s findings deepen our current understanding of how memory is organized in the brain and therefore how memory works. The implications—though still requiring substantial further development—could give hope to people suffering from memory problems, such as those due to aging or brain damage. 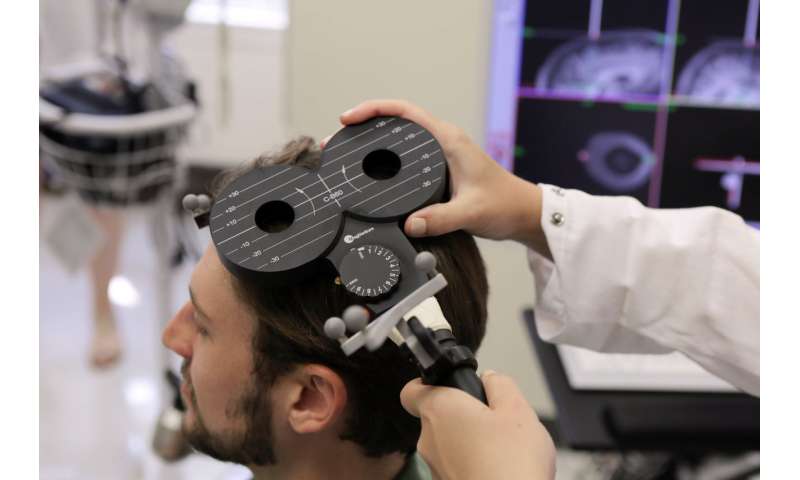 “Being able to manipulate the memory network in this very specific way certainly holds promise in the ability to intervene in disorders of memory, which occur for a variety of reasons,” Voss said.

Voss cautioned that there are many more steps between his basic science study and an effective clinical intervention, but said his findings indicate that it’s a research path worth pursuing.

“The fact that we can use noninvasive stimulation to increase excitability in this targeted brain network means we’re making the network do more of what it naturally does to succeed at memory formation,” Voss said.

Voss has previously used noninvasive brain stimulation—transcranial magnetic stimulation (TMS) – to improve memory, but this study helped decipher what the memory network was doing differently during the stimulation to allow it to improve its performance.

What the study found was that while the brain network was undergoing stimulation and forming a new memory, the excitability in the subject’s brain network increased dramatically.

After receiving TMS for several consecutive days, study participants would play a memory game to assess how much their associative memory had improved. The “robust” effects of the stimulation were consistent across almost all study subjects, Voss said.

Although there are different kinds of memory, Voss’ study focused on associative contextual memory, which is thought to be created in a specific posterior network of the hippocampus. This type of memory is an arbitrary collection of little pieces—a shirt, a face, a room, for example—that the brain binds together to create a coherent association that can be recalled later.

The study included 32 Chicago subjects (16 in the experimental group, 16 in the control group) between the ages of 18 and 35 who had normal, healthy memory and cognitive abilities. Participants underwent an MRI scan of their brain before receiving stimulation. To precisely identify where the study participant’s hippocampal network was located, the scientists used a sterotactic positioning system—a navigator tool consisting of a forehead sensor, camera and a pinpoint tool—to localize the position of the physical head as it related to participant’s brain scan from the MRI. This ensured Voss’ lab members were administering the TMS to the correct area of the subject’s brain.

Participants then received 20 minutes of repetitive TMS to the stimulation target in their brain via a magnetic stimulating coil for five consecutive days. The TMS feels like a mild tapping at 20 beats per second, Voss said.

Voss’ lab members tested the memory of study participants by asking them to look at several images and try to associate them or remember their location.