STAT3 can be a therapeutic target for chronic active EBV infection, a fatal disorder

Chronic active Epstein-Barr virus infection (CAEBV) is an EBV-positive T- or NK-cell neoplasm accompanied by sustained systemic inflammation. Many studies have attempted to understand the case of CAEBV; none have provided a clear explanation until now.

A research team led by experts from Tokyo Medical and Dental University (TMDU) investigated the activity of STAT3, a factor that helps to control cell proliferation and survival, in EBV-infected T- or NK-cells in CAEBV. They found that STAT3 was constitutively activated in those cells.The study is published in Oncotarget. The authors write, “STAT3 is constitutively activated in chronic active Epstein-Barr virus infection and can be a therapeutic target.”

CAEBV is a disorder with two aspects: an inflammatory disorder, and a lymphoid neoplasm. It may progress to chemotherapy-resistant lymphoma or leukemia, or to a life-threatening disorder known as hemophagocytic lymphohistiocytosis. Despite a variety of efforts to control or cure CAEBV, the sole effective treatment has been stem cell transplantation from a HLA-matched donor. Unfortunately, some patients are not good candidates for this therapy, and there are many side effects. 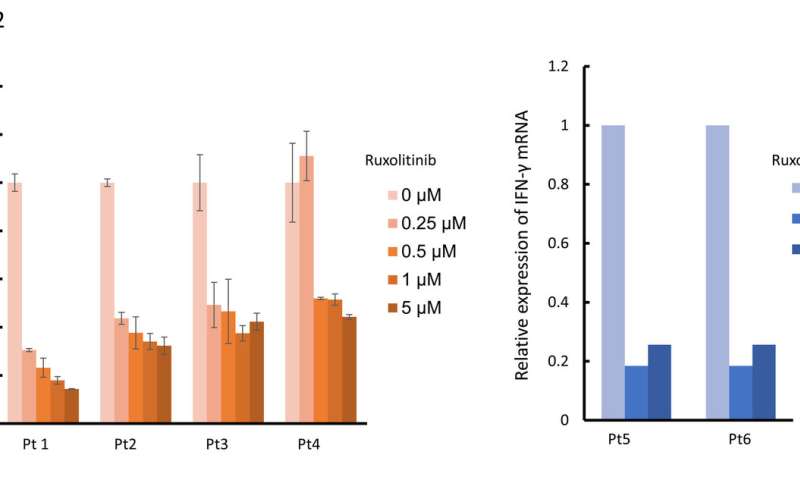 “Constitutively activated STAT3 has been observed in a variety of primary tumor cells, including other tumors associated with Epstein-Barr virus infection,” says Ayoko Arai, corresponding author on the study. “We suspected that STAT3 may be similarly activated in cells from patients with CAEBV.”

In the study, increased phosphorylation, an important modification of cellular proteins, was observed on STAT3 in EBV-infected T- or NK-cells from patients with CAEBV. In those same cells from health individuals, the phosphorylation was absent, suggesting that it may provide a useful drug target.

“Our analyses revealed no mutations in STAT3, so we tested whether inhibitors of STAT3 phosphorylation might modify its activity in laboratory-grown,” says Erika Onozawa, lead author on the study. “We found that ruxolitinib, a drug that is currently used for treatment of myelofibrosis and polycythemia vera, could suppress the survival of the EBV-infected cells in a dose-dependent manner.” 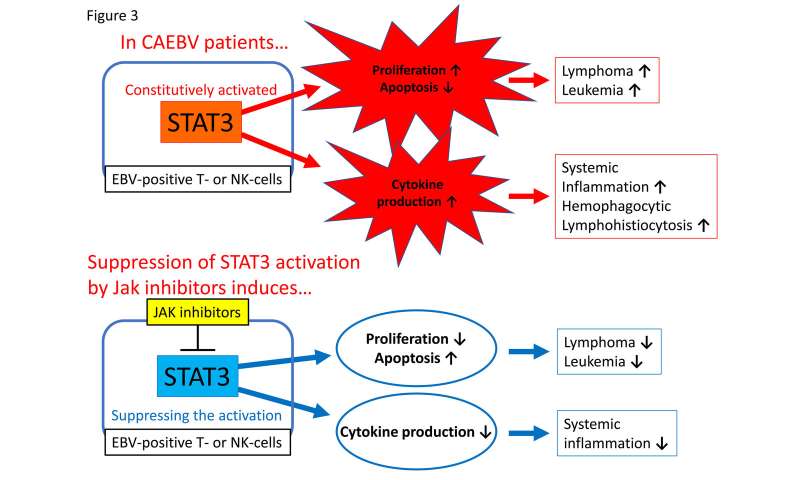 In addition to the ability of ruxolitinib to induce the death of virus-infected T- or NK-cells from patients with CAEBV, the researchers showed that it could block the production of several important inflammatory cytokines that play a role in the progression of CAEBV.