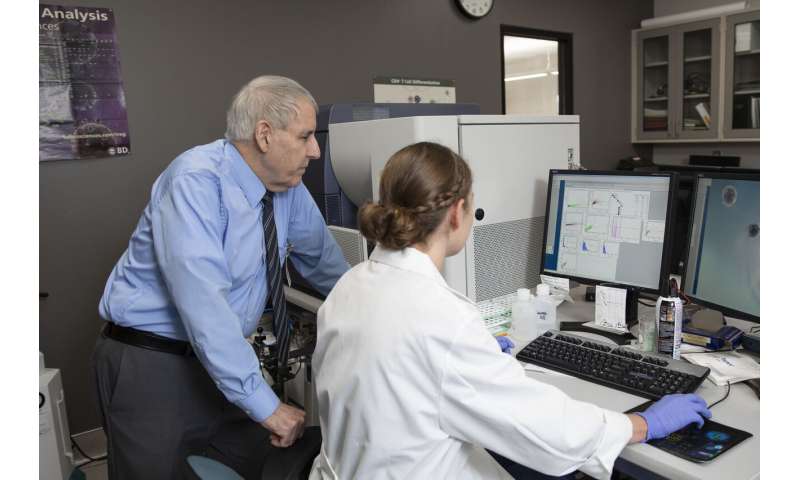 Neuroblastoma is the most common cancer outside of the brain in infants and young children and often fails to respond to therapy. Though it can appear in several areas of the body, it commonly develops as a solid tumor most frequently found in or adjacent to the adrenal glands, which sit atop the kidneys.

Patients diagnosed with high-risk neuroblastoma typically undergo intensive treatments that can include surgery, radiation therapy, chemotherapy and myeloablative chemotherapy, which is chemotherapy followed by a bone marrow or stem cell transplant. Regardless of which treatment is used, the five-year overall survival rate for these young patients is approximately 50%, and 50%-60% will experience a relapse.

To help improve the treatment outcomes for neuroblastoma patients, C. Patrick Reynolds, M.D., Ph.D., director of the Texas Tech University Health Sciences Center (TTUHSC) School of Medicine’s Cancer Center, and a team of colleagues recently completed a study using fenretinide, one of several derivatives of vitamin A known as retinoids, to boost the effects of venetoclax, an inhibitor of a protein known as BCL-2 that helps neuroblastoma cells survive and grow.

Fenretinide was originally developed years ago in an effort to prevent breast cancer. Reynolds said he started studying it because he had seen vitamin A derivatives produce major survival improvement in neuroblastoma during a large national clinical trial he conducted previously.

“In studying this drug, we found one of the key issues was that, unlike the other vitamin A derivatives that caused the cancer cells to just stop growing and become more mature, fenretinide worked through different mechanisms and killed the cells.”

One of the problems, Reynolds said, was the drug’s formulation. At the time, it was an oral capsule that was not achieving the kind of levels that would really kill the cells in patients. Working with the National Cancer Institute, Reynolds and fellow TTUHSC Cancer Center investigator Barry Maurer, M.D., Ph.D., developed two novel fenretinide formulations, one an oral formulation and the other an intravenous formulation.

“Those formulations had considerable activity in neuroblastoma, which is a very malignant cancer,” Reynolds said. “It’s often difficult to get patients to have any response at all when they develop recurrent disease, and the fact that we could get multiple complete responses to fenretinide alone was very encouraging, though what we wanted was a drug combination that was very well tolerated.”

Reynolds started working with a drug developed by AbbVie called venetoclax very early in its inception. The drug targets protein molecules called BCL-2, one of several anti-death molecules that exist in our cells. BCL-2 is used for various functions in a normal cell, but cancer cells use the protein to help defeat cancer therapy. Some of these cancer cells, including several types of neuroblastoma, have a tendency to overexpress BCL-2 in order to survive and grow.

“The idea is to inhibit those molecules that defeat the chemotherapy with the venetoclax because it specifically targets the BCL-2 molecules,” Reynolds said. “The drug actually worked against lymphomas in adults and was registered and approved for use by the FDA.”

The Reynolds lab had previously worked with drugs from AbbVie that targeted multiple BCL-2 families, but venetoclax targeted very specific BCL-2 molecules without producing some of the toxicities that often occur in patients.

“One of the goals in this study was to find out if venetoclax, which is now in routine use for a type of leukemia and lymphoma, would enhance the fenretinide as we had seen before with similar drugs,” Reynolds said. “And in fact, that was the case.”

Nguyen, an M.D./Ph.D. student who was the study’s lead author, conducted additional cell culture work that demonstrated the fenretinide-venetoclax combination was very effective against the neuroblastoma cells.

Using xenografts, which are cancer cells taken from humans and grown in mice, Nguyen saw that fenretinide produces a significant number of unstable molecules that contain oxygen and easily react with other cell molecules. This process, known as reactive oxygen species, is one way by which fenretinide kills cancer cells.

However, this reaction also upregulated, or activated, a pair of transcription factors, which proteins help to turn on or turn off specific genes by binding to nearby DNA. In this case, the transcription factors were increasing the amount of NOXA. NOXA blocks MCL-1, a protein that can replace BCL-2 and help cancer cells survive. Thus, NOXA is a protein that overcomes a key mechanism of resistance to venetoclax, causing cancer cell death.

“What is happening is we are taking out the BCL-2 in the cell with venetoclax, but the cell defends itself by upregulating MCL-1,” Reynolds said. “Then the fenretinide comes in and triggers the upregulation of NOXA, which in turn takes out the MCL-1. That’s why the combination of these drugs was so lethal for the cancer cells and really not that toxic at all for normal cells.”

One of the obstacles in trying to get cancer therapy to work, especially with targeted agents like fenretinide and venetoclax, is identifying patients that are likely to respond positively to the treatment. To do this, researchers look for biomarkers, which are unique characteristics that can be used to identify cancers that are likely to respond to a particular type of treatment. Reynolds said Nguyen was able to show that a high expression of BCL-2 is a biomarker that identifies neuroblastoma patients that will respond very well to the fenretinide-venetoclax combination.