Researchers ID cause and potential treatment for deadly inherited arrhythmia 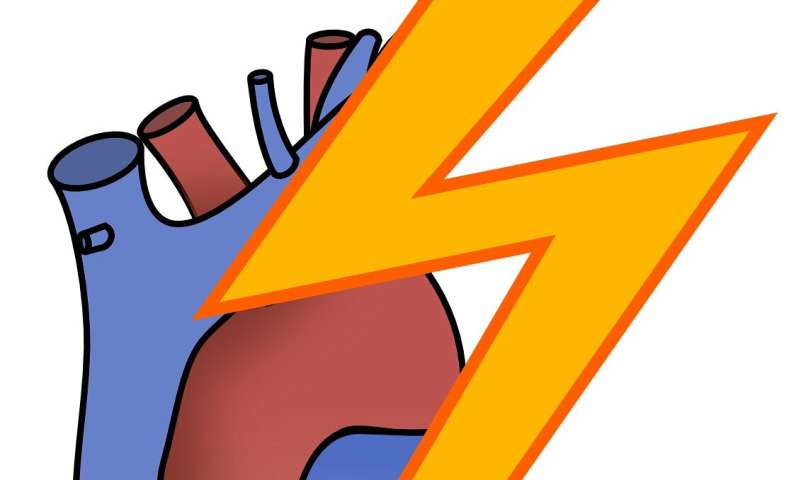 Leading a global network of 28 healthcare institutes, researchers at The Ohio State University College of Medicine, Wexner Medical Center and Davis Heart and Lung Research Institute have discovered key genetic and molecular connections that explain the beginning of an inherited, life-threatening form of heart disease and point toward a way to treat it. Their research just published in The Journal of Clinical Investigation.

Arrhythmogenic cardiomyopathy (ACM) affects about 60,000 people in the U.S. The disease is characterized by structural and tissue remodeling of the heart and the presence of arrhythmias, or irregular heartbeats.

While detectable through conventional medical technologies, ACM symptoms can mimic less serious conditions, such as functional preventricular contractions. Because of this, people with ACM are often unaware of their condition until their irregular heartbeats spiral into lethal arrhythmia.

Currently there is no disease-specific therapy for ACM. Patients can take beta-blockers to help manage symptoms or have a cardioverter-defibrillator implanted to prevent sudden death.

Since 2015, Nathaniel Murphy, a physician-scientist student in Ohio State’s Frick Center for Heart Failure and Arrhythmia, has devoted his research efforts to finding the genetic common denominator in ACM patients and understanding the origins and disease cascade of abnormal signaling pathways.

Now, through genetic testing, molecular biology and pharmacology, and preclinical and clinical work, Murphy, study coauthor Dr. Jason Roberts of Western University in Ontario and their team have identified variants in the protein ankyrin-B that patients with ACM have in common, and explained changes in a signaling pathway that leads to the disease. They have also tested a compound that corrects those pathway changes and prevents ACM development in an animal model.

“We identified a mislocalization in the extracellular protein beta-catenin and linked it with specific variants in ankyrin-B. Beta-catenin influences gene transcription and when it goes awry it enables fibrosis and fat deposition instead of normal heart muscle cell development,” Murphy said. “If we prevent the degradation of beta-catenin, we can prevent or stop ACM from developing in an animal model.”

Murphy said one way to do this is to inhibit the protein GSK3. That allows beta-catenin to perform its proper role in healthy cardiac cell development.

In a mouse model, the researchers knocked out the gene that produces ankyrin-B and found that the mice developed ACM. When they injected these young mice with an experimental anti-cancer compound that inhibits GSK3, the mice developed normally functioning hearts.

“This shows that we can rescue the phenotype of a healthy heart in a preclinical model,” Murphy said.

Using immunofluorescence to compare mouse and human autopsy samples on a molecular level revealed the same connection between ankyrin-B aberrations and beta-catenin mislocalization in both groups.

“Learning that we can change the trajectory of ACM progression in mice, and seeing the same molecular patterns repeated in humans, means we are on track to stopping or preventing this devastating disease,” Murphy said. “The next step is to test this through a preclinical model.”

This work began with an unusual case referred to Ohio State—an athlete who learned during a physical and genetic testing that he had ACM and an ankyrin-B variant. The patient refused recommended treatment and subsequently died while running. Upon autopsy, fibrosis and fatty tissue were found in both heart ventricles.

Through a unique collaborative effort between clinicians and scientists, known as the J.B. Project and funded by a generous donor, Ohio State cardiologists presented the case to researchers Murphy and senior author Peter Mohler, who went looking for answers.

“We’re fortunate to have support from the community to push forward these new discoveries. Specifically, this work could not have been done if not for the Frick Center and the J.B. Project,” said Mohler, who is also vice dean for research in the College of Medicine.

This work ultimately involved scientists from 28 institutions around the world and, in the process, they have linked about a dozen gene variants to ankyrin-B and ACM.

“Solving big medical problems such as sudden cardiac death will take global collaboration among the world’s best scientists. I’m proud that our team is leading these extraordinary efforts,” said Dr. K. Craig Kent, dean of the College of Medicine.