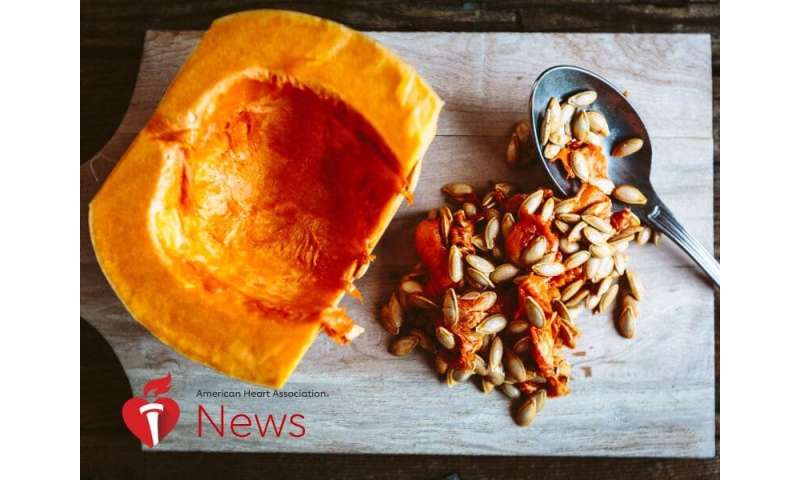 Incorporating pumpkin pulp or seeds into a healthy diet may help reduce blood pressure levels, according to a new study using rats.

The research, presented Thursday at the American Heart Association’s Hypertension 2019 Scientific Sessions in New Orleans, compared the effect of a control diet to one that contained pumpkin pulp or seeds on the rats’ blood pressure and heart muscle. The rats were put on the diet at 6 weeks old and fed it for eight weeks. The rats on a diet in which 4% of the calories came from pumpkin seeds or pulp had blood pressure levels more than 20% lower than the rats on the control diet.

For close to two decades, researchers have looked at the nutritional benefit of pumpkin oil and seeds, said Dr. Soweto Thomas, a biomedical researcher at Tuskegee University in Alabama who conducted the study. “But most of this research has been in other countries.”

Until now, he said, no one had looked at the effect of pumpkin flesh on high blood pressure.

Using medications as prescribed and making lifestyle changes, such as eating a healthy diet and getting regular exercise, can lower blood pressure.

A 2017 study in the Journal of the American College of Cardiology suggested a diet called Dietary Approaches to Stop Hypertension (DASH) combined with a low-salt diet might lower high blood pressure.

For his study, Thomas used the pulp and seeds from calabaza squash, which often is used in canned pumpkin. The pulp and seeds were freeze dried and then made into a powder that was added to the rat food.

Thomas said the amount the rats ate would be equivalent to about 1 1/2 cups of boiled pumpkin or 1/3 cup of pumpkin seeds. Adding this amount of pumpkin to a person’s diet “is easily attainable,” he said.

Judith Wylie-Rosett, a professor in the Department of Epidemiology and Population Health at Albert Einstein College of Medicine in New York, said pumpkin is one of the vegetables recommended by the DASH diet.

Wylie-Rosett, who was not involved in the new study, said pumpkin is rich in beta carotene and is a good source of potassium and other compounds thought to help lower blood pressure.

Even so, whether eating pumpkin pulp or seeds daily would lower blood pressure in humans as it did in rats isn’t known.