People can survive organ failure, a review explores how 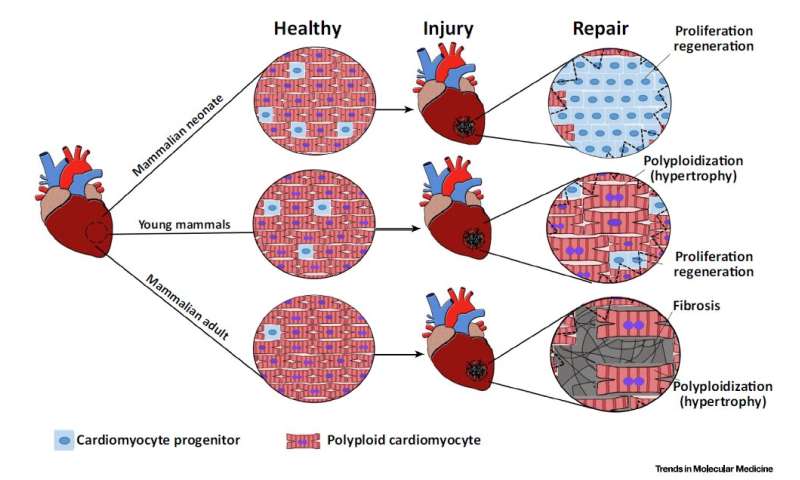 Although organ failure can be fatal, your kidneys, heart, and liver are prepared for this catastrophe. Emerging research supports the finding that two cell populations quickly respond and work together to restore a non-functioning, or failing, organ. First, the surviving cells go into overdrive, working to keep the organ functioning while stem-like cells replace damaged tissue. A Review published March 29 in the journal Trends in Molecular Medicine explores how this dual-response can save lives.

“When tissue is injured, cells divide to replace it, but the process of cell division in specialized cells would prevent the cell from performing its normal duties. In situations where an organ is failing, which means the organ already isn’t functioning properly, your body can’t afford to have many cells stop working,” says Paola Romagnani (@PRomagnani), a professor of nephrology at the University Meyer Children’s Hospital of Florence. “Up until recently, it was believed that function recovery after injury was a consequence of regeneration involving all specialized cells simply ignoring that such cell divisions would imply a further potentially life-threatening decline of residual organ function.”

That changed when it was realized that there are in fact two types of cells that react to organ failure. “The majority of cells in an organ are highly specialized cells that have lost the ability for cell division but that can enhance their working capacity. In contrast, a minority of cells is un-programmed, like a stem cell, and able to divide efficiently,” says Romagnani. “Armed with this knowledge, we wanted to understand how the two processes worked together to help an organ recover from failure.”

Because cells in specialized organs such as the heart, kidneys, or liver are programmed to perform specific tasks, only stem-like cells are able to rapidly divide and replace damaged tissues. “Skin, for example, performs the same function wherever it is, which makes rapid cell division an effective way to repair skin damage. Indiscriminate replication of specialized organ tissue, however, would reduce an organ’s health more than it would help,” says Romagnani.

“This is why the cooperation between the two cell types is so important. The specialized cell will replicate its DNA, but not divide, which is a process known as endoreplication. By doing that, the cell is still able to function and the amount of work it can do greatly increases—it’s making up the work of cells that have died,” Romagnani says. “Simultaneously, or shortly after cells have endoreplicated, you have the stem-like cells rapidly dividing to replenish lost tissue.”

While studying this interaction, Romagnani and her team found that some organs rely more heavily on one technique than the other. “The heart tends to have smaller densities of stem-like cells than the liver, for example, which means the heart responds to organ failure largely with endoreplication of specialized cells and to a lesser degree with cell regeneration,” she says. “In the liver, cell regeneration will occur more readily; but regardless of the more dominant reaction, both responses play critical roles in both organs.”

There are also tradeoffs between the two recovery responses, which has implications for developing medication that may encourage one response over the other. “Endoreplication is a way to quickly increase cell size and function undergoing hypertrophy, which is great in the short term because it can save a life,” Romagnani says. “But in the long run, having a high proportion of cells in this state can result in chronic organ dysfunction due to the breaking-down of tissues.”

In the case of cell division in stem-like cells, tissue strength is better long term, but so is the chance to develop cancer in the affected organ. “When you have a high number of cells that are efficient at dividing, you have a higher risk of cancer,” she says. “These significant tradeoffs are likely why both methods exist and why it’s so important for them to be balanced.”