The use of science and technology to manipulate matter on a molecular or nanoscale is known as nanotechnology. It may easily be regarded as the most forthcoming technology of our era and as such is used in many different industries.

Owing to the fact that nanotechnology constructs matter from basic atomic building blocks, the technology can be used to create and manipulate virtually anything, from inanimate objects to living tissues. This makes nanotechnology a formidable weapon against the processes that are believed to cause aging, as it may be used to extend the life of biologic tissues through growth and repair of aging or damaged tissues.

K. Eric Drexler, a key figure in the mainstream introduction of nanotechnology, posited in his late 1980s book, “Engines of Creation,” that self-replicating nanomachines could be created to conduct cellular repair in vivo. Further support for Drexler’s idea came from Raymond Kurzweil, author of “The Singularity is Near,” who postulated that nanobots would be the future tools by which to remedy the effects of aging. Although the concept of nanotechnology has been around for centuries, historians credit the earliest systematic consideration of the manipulation and creation of matter on a nanoscale to American physicist R. Feynman, who highlighted the concept in his 1959 speech titled, “There’s Plenty of Room at the Bottom.” 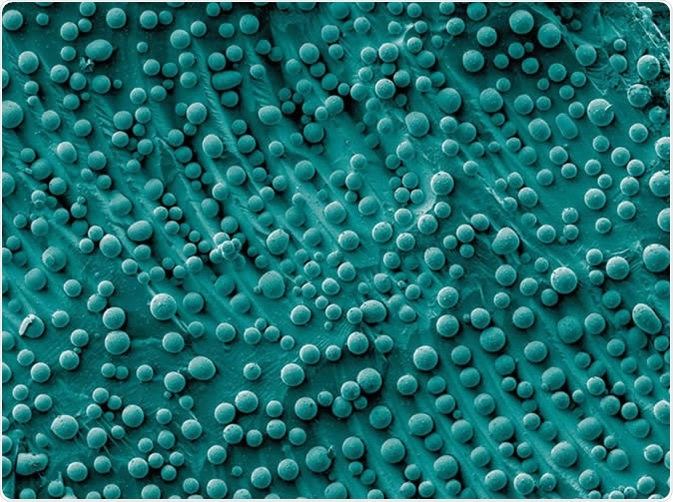 This is an electron micrograph showing gallium arsenide nanoparticles of varying shapes and sizes. Image Credit: A. Demotiere and E. Shevchenko/Argonne National Laboratory

In light of the previously described capabilities of nanotechnology, it is no surprise that this technology can also be employed in the cosmeceutical industry to counter the visible effects of aging. This area is of particular interest because the cosmeceutical industry is highly lucrative, having had rapid economic sector growth over the past few decades. Nano-cosmeceuticals offer the promise of overcoming the drawbacks associated with traditional cosmeceuticals. Representative agents attempt to counter physiologic processes such as photoaging, wrinkles, and hair damage, among others.

When used to counteract the effects of aging, nano-cosmeceuticals for the skin, hair, or nails require nanocarriers. Types of carriers include nanoparticles, nano-emulsions and nanospheres, which replace traditional delivery systems. Unlike conventional carriers, nano-carriers augment product penetration into the skin and confer superior pharmacodynamic profiles to the administered agent. There is a higher degree of cosmeceutical stability, more specific targeting to the area of interest, and more controlled drug release.

Although nano-cosmeceuticals undoubtedly offer many advantages over traditional cosmeceuticals, there are a few accompanying disadvantages. These drawbacks include, but are not limited to, the consequences associated with production of large numbers of oxygen species. This production of oxygen species by nanoparticles not only causes oxidative cellular stress, but damages cellular components, such as DNA and protein structures, and causes tissue inflammation. Furthermore, some nanomaterials are directly cytotoxic (i.e., toxic to the cell and its components), whereas others can produce unintended harmful environmental effects.

Skin aging is caused by many factors. The most important of these factors are time, stress, chemical products, pollution, and ultraviolet and infrared radiation. As we age, the collagen quantity and quality in our skin decreases. Collagen is a structural protein involved in skin elasticity and strength. Loss of this protein as we age contributes to wrinkling, thinning, reduced barrier functionality, and dryness. Nano-cosmeceuticals are therefore instrumental in limiting or even reversing these effects that result from  time and environmental exposure.

Dr. Damien Jonas Wilson is a medical doctor from St. Martin in the Carribean. He was awarded his Medical Degree (MD) from the University of Zagreb Teaching Hospital. His training in general medicine and surgery compliments his degree in biomolecular engineering (BASc.Eng.) from Utrecht, the Netherlands. During this degree, he completed a dissertation in the field of oncology at the Harvard Medical School/ Massachusetts General Hospital. Dr. Wilson currently works in the UK as a medical practitioner.