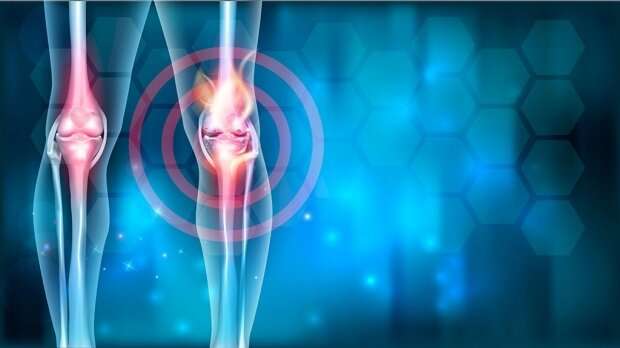 Stanford University School of Medicine scientists have definitively linked mast cells, a class of cells belonging to the immune system, to the development of osteoarthritis, one of the world’s most common causes of pain and immobility.

In a study published online May 14 in eLife, the scientists demonstrated for the first time that banishing mast cells—or blocking signals from the most common stimulus activating them in real life, or disabling a cartilage-degrading enzyme they release when activated—all protected mice from developing osteoarthritis typically induced by a classic experimental procedure. The results were supported by findings in human cells and tissues.

Osteoarthritis, by far the most frequently occurring variety of arthritis, is characterized by cartilage breakdown and inflammation in joints, which can be further aggravated by excess bone growths called osteophytes.

Some 30 million Americans have symptomatic osteoarthritis. By time you’re 60, your chances of exhibiting osteoarthritis symptoms exceed 30 percent. By age 80 or 90, your risk has risen to nearly 100 percent.

Not just wear and tear

Osteoarthritis has traditionally been thought to be an inevitable result of wear and tear: the breakdown of cartilage over many years, ultimately resulting in grinding, bone-on-bone contact and degeneration in the affected joints. But the new study shows the essential involvement of the immune system in the genesis of osteoarthritis, while prying open a window through which researchers can see a way to designing drugs to prevent it. At present, there are no drugs that can prevent, slow or cure it.

“Even though the vast majority of us will develop osteoarthritis at some point in our lives, we don’t have any disease-slowing therapies,” Robinson said.

The chances of actually reversing damage to joints are slim, he said. Today’s treatments for the osteoarthritis-induced pain and mobility consist of painkillers like ibuprofen, naproxen and acetaminophen; walkers and canes; and knee or hip replacements.

Mast cells are best known as the culprits that produce the histamines and other molecules responsible for allergic symptoms, ranging from the itch of eczema to the mucous explosions of hay fever to the throat constriction of asthma or food-triggered anaphylaxis. But mast cells also produce a degradative protein, tryptase, that can rip up collagens and other molecules that form the cartilage in joints.

Mast cells usually reside quietly within tissues throughout the body. But when they become activated, they secrete granules containing histamines, tryptase and other inflammatory substances. The classic trigger for that activation is the binding of a form of circulating antibody, or immunoglobin, called IgE to specialized receptors abounding on mast cells. The evolutionary purpose of IgE, mast cells and histamines is believed to be to fight off parasites, which have plagued humans and other animals throughout most of evolution but have become relatively rare in humans in recent decades, at least in industrialized countries.

While mast cells have been found lurking in joints of people with and without symptomatic arthritis, until now neither mast cells nor IgE have been definitively identified as risk factors for osteoarthritis.

Protection from the disease

Several types of genetically altered lab mice whose mast cells were deficient or absent were highly resistant to the development of osteoarthritic features including joint inflammation, osteophyte development and joint breakdown after undergoing an experimental procedure to induce these symptoms, the researchers found.

The researchers also proved that impairing the action of tryptase, which is secreted almost solely by mast cells, had a similar protective effect. And they further demonstrated that depleting IgE or its binding to receptors on mast cells, or disabling those receptors’ subsequent signaling to components within mast cells, all were protective.

In all, the scientists were able to get the same osteoarthritis-protective results using a number of genetic tricks, as well as three small-molecule compounds that each blocked a separate stage of the cascade via which IgE trips off mast-cell activation and secretion of granules containing collagen-chewing tryptase. One drug used to impede mast cells’ survival, imatinib, is licensed by the Food and Drug Administration and marketed as Gleevec as a therapy for chronic myeloid lymphoma. But while imatinib is an acceptable drug for such life-threatening cancers, Robinson said, it’s too toxic for sustained long-term use as a therapy in an indication such as osteoarthritis, which, although painful and mobility-reducing, is seldom directly life-threatening.

In any case, Robinson said, much of the joint damage caused by osteoarthritis is unlikely to be reversible.