Is Kombucha Good for You?

Kombucha is a slightly fizzy and sour, fermented drink made using sweet tea and a culture called ‘symbiotic culture of bacteria and yeasts’ (SCOBY).

In order to make kombucha, the tea and sugar are boiled together and cooled down before adding the culture (SCOBY). SCOBY can be taken from an existing batch of kombucha or can be purchased online. This mixture is covered and kept to ferment for about a week. It is then stored in an airtight container with some more sugar and allowed to sit for a few more days. The longer it is left to sit, the fizzier the beverage will be. Any extra flavors such as fruits or spices can be added at this point. The bacteria and yeasts in SCOBY convert the sugar in the tea into acetic acid and ethanol. The distinctive sour taste of kombucha is due to the presence of acetic acid. 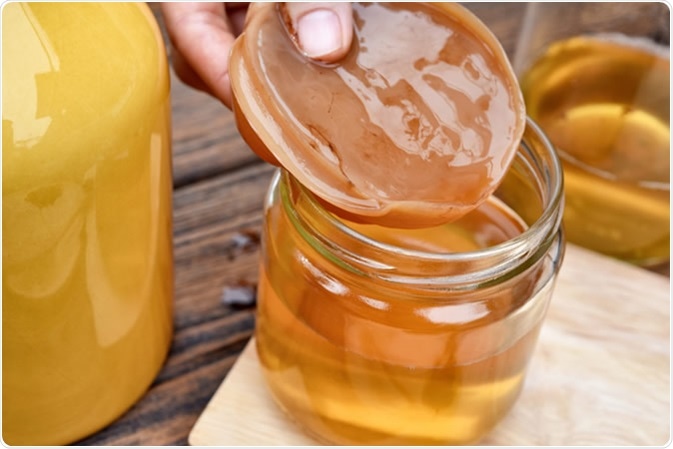 It has been suggested that kombucha consumption is associated with several  health benefits, though these have yet to be supported by scientific research.

According to reports, some animal studies have shown that kombucha is good for overall immune health, mental health, and prevention of cardiovascular disease. Many studies have shown that at a pH of about 2.5, kombucha exhibits antimicrobial activity across a broad range of Gram positive and negative bacteria and yeasts, but this may be due to the low pH or to the presence of components of the tea.

Like most fermented foods, it is a good source of probiotics as it contains live, gut-friendly microorganisms. Kombucha has tea which is rich in polyphenols. Polyphenols are antioxidants, which are substances that prevent oxidative damage by free radicals in our body. Free radicals have been associated with oxidative stress and disease processes including cardiovascular disease, cancer, and neurodegenerative diseases. 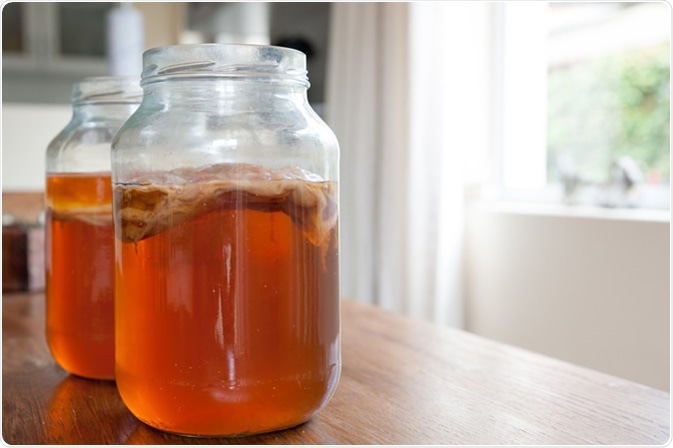 Kombucha tea, the brew is ready to be placed in storage with the bacteria culture in place to ferment the brew. Image Credit: Daniel S Edwards / Shutterstock

Kombucha contains glucuronic acid, which plays a role in liver detoxification and elimination of bilirubin, drugs, chemicals, pollutants, and excess steroid hormones from our body. In animal studies, Kombucha has been associated with weight loss, improved digestion, reduced inflammation and improved bone health. There are many other purported benefits of kombucha that have not been studied in humans or animals.

Side effects of kombucha

The FDA has confirmed that kombucha is safe for human consumption when properly prepared. Some people have reported adverse effects such as nausea, jaundice, and vomiting with with overconsumption, pre-existing conditions, and poor storage / handling of the product. However, kombucha, like most food, is not suitable for all. Pregnant or breastfeeding women and people whose immune system has been compromised are advised not to consume kombucha.

Consuming too much kombucha has been reported to cause nausea, stomach ache, and dizziness. Prolonged fermentation of kombucha results in the accumulation of organic acids to levels that are harmful for direct consumption and hence is not recommended.

Although some research studies have suggested beneficial effects of kombucha in animal models, there is no evidence that  it can be used to treat any health issue. Always consult your physician when you are not sure about introducing new foods like kombucha to your diet, or if you experience negative side effects after consuming these foods.

Susha has a Bachelor of Science (B.Sc.) degree in Chemistry and Master of Science (M.Sc) degree in Biochemistry from the University of Calicut, India. She always had a keen interest in medical and health science. As part of her masters degree, she specialized in Biochemistry, with an emphasis on Microbiology, Physiology, Biotechnology, and Nutrition. In her spare time, she loves to cook up a storm in the kitchen with her super-messy baking experiments.