Spinach (Spinacia oleracea L.) is a nutrient-rich leafy vegetable. It contains several important micronutrients which encompass a wide range of vitamins and minerals, as well as dietary fiber, protein, and fatty acids which are essential for the maintenance, improvement, and regulation of tissue. 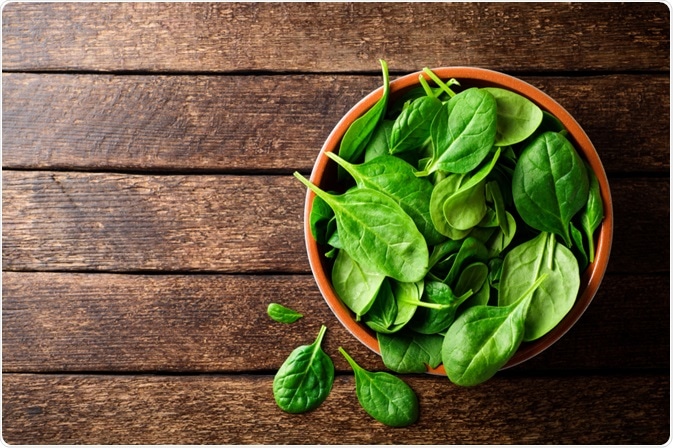 Spinach is also a substantial source of antioxidants that are obtained from carotenoids and polyphenols. Several health benefits are consequently associated with spinach which is attributed to its lipid-lowering properties and cardiovascular protection, as well as anti-inflammatory, anti-obesity, anti-diabetic (hypoglycemic activity), and anti-cancer effects, in addition to neuronal protection, antimacular degeneration, and many others.

Spinach is a superior supplier of vitamin A (469 μg/100 g) and provitamin A or β-carotene (5626 μg/100 g), vitamin K, vitamin C, vitamin B2 with lower concentrations of folic acid (including B9, thiamine or B1, and riboflavin or B2), vitamin C, vitamin E, and vitamin K. Among the vitamin E, there is a family of compounds known as tocopherols and tocotrienols. Other vitamins include the lesser-known xanthophylls (18.18 mg/100 g), which include violaxanthin, neoxanthin, lutein, and zeaxanthin.

Two of the lesser-known glycoglycerolipid components of spinach include sulfoquinovosyl diacylglycerol (SQDG) and monogalactosyl diacylglycerol (MGDG), which have been implicated in the activities of mammalian replicative polymerize is and in the suppression of the growth of human cancer cells, which suggests a potent functional food for anti-cancer activity. Overall, spinach contains the second-largest quantity of total glycoglycerolipids among 11 major vegetables which include parsley, green tea, kale, broccoli, chive, cabbage, being, cucumber, sweet pepper, and Japanese honeywort.

Spinach is one of many fruits and vegetables recommended as part of 5-a-day initiatives worldwide to increase the consumption of healthy foods. This includes the European SFS (School Fruits Scheme) and APRIFEL; however, the average intake is low within certain European countries as well as more widely in North America, with differences in consumption related to socioeconomic differences.

Spinach is considered to be an attractive food to increase the consumption of micronutrient-rich foods; it contains approximately 150 kcal per 100g and provides a wide variety of minerals and vitamins, which collectively comprise 49% of the recommended daily amount (RDA) in the case of folates, vitamin K (604% RDA), vitamin A (108% RDA), and vitamin C (47% RDA). Vitamin C is important for the absorption of iron in the diet. With regards to minerals, 100g of spinach supplies 20% of the RDA for magnesium and 16% of the RDA for potassium.

Both vitamins C and B­9 are implicated in the synthesis of proteins and DNA synthesis. In addition, the folate found in spinach is crucial for the prevention of anemia, as folate is a cofactor in cell growth. It is also an essential food in pregnancy, to prevent spinal abnormalities which include spina bifida. Folate is often offered as a supplement as uptake in the average diet is low; the consumption of spinach is a potential source of decreased reliance on medicament prescription of synthetic forms.

The vitamin E content in spinach also offers protection against conditions and disorders associated with low vitamin E; this includes atherosclerosis, decreased immunity, endocrine disturbances, or muscular dystrophy. Green leafy vegetables at large are associated with high vitamin E content – spinach contains high levels of vitamin K1 or phylloquinone. Deficiency of this form of vitamin K is associated with alteration in blood coagulation and unwanted calcification that generates atherosclerosis as a result of lowering the gamma-carboxyglutamic acid which is implicated in homeostasis.

Spinach contains saponins which are known to lower cholesterol and blood pressure because of their interactions with the surface molecules in the intestinal cell membrane, forming insoluble complexes with cholesterol, which interfere with cholesterol absorption. These complexes are excreted through the bile duct and exit the body through feces.

The consumption of spinach is associated with a reduction in a process called peroxidation. Lipid peroxidation is a form of oxidative stress that involves lesions in the epithelium of endothelial cells. This serves as a nucleation point for the aggregation of platelets in the damaged area. While prostacyclin can prevent this aggregation process, its activity is inhibited by lipid hydroperoxides.

The formation of foam cells from macrophages is caused by the oxidation of low-density lipoproteins, which occurs at the site of the lesion. These macrophages penetrate the interior and accumulate fats, which give a foam-like appearance. Spinach can reduce the incidence of this occurrence by 5% and consequently reduce the likelihood of developing cardiovascular disease due to improved endothelial function and blood pressure due to the nitrate and antioxidant content it contains.

Nitrates in spinach function as nitric acid donors which induce a vasodilating effect in the arteries and veins, due to relaxation of endothelial smooth muscle which can reduce the risk and/or severity of stable effort angina, acute cardiac insufficiency, and acute coronary syndrome. Nitrates also improve perfusion and contraction of muscle by increasing the ATP efficiency during contraction in type II (or rapid) muscle fibers. This serves to increase the tolerance of intense exercise as it improves lung capacity; this may improve skeletal muscle work which can improve quality of life in elderly patients whose muscle integrity is compromised.

Vitamin C is also inversely linked with metabolic syndrome and cardiovascular disease by improving arterial pressure which encourages the construction of small blood vessels, antioxidant capacity, HDL cholesterol, endogenous antioxidants such as glutathione peroxidase. This enzyme can prevent the production of free radicals which reduces the risk of damage to the endothelium.

The presence of β–carotene, β–cryptoxanthin, lutein, and violaxanthin in spinach also increases carotenoid levels in lipoproteins. Lipoproteins mobilize fats in the body, which includes ingested and endogenous fats such as cholesterol and triglycerides, and transport many hydrophobic compounds such as vitamins, oxidizing and altering LDL lipoproteins, and carotenes, therefore playing an essential role in atherosclerosis.

the consumption of vegetables such as spinach is associated with a decreased incidence of obesity. The mechanism by which spinach exerts its effect is by the presidents of compounds called thylakoids, which increase leptin levels, the hormone responsible for the suppression of appetite and increasing feelings of satiety. In addition, spinach reduces the incidence of diabetes as a consequence of its low glycemic index and high fiber content. Thylakoids are enzymes that are found in the chloroplasts and slow down digestion; an additional enzyme called rubisco (d-ribulose-1,5-bisphosphate carboxylase/oxygenase) is also associated with weight loss. Spinach also serves to activate delta-opioid receptors which encourages normal dietary patterns while suppressing the desire to eat fatty foods.

Due to its high fiber content, presence of complex carbohydrates, and low levels of fat, spinach improves the control of blood glucose concentration which can reduce insulin dependency, and help control weight. This is especially true in diabetic patients, where spinach generates an increase in satiety.

the presence of inositol or vitamin B7 is associated with hypoglycemia. Another told can improve the liver's ability to dissolve fat, and together with choline produced less it and, which prevents fats from being deposited. This is also useful for depression as it stimulates serotonin production.

Spinach is also useful in diabetic patients where it can help speed up the regeneration process of ulcers which are a complication of diabetes by activating the polyol pathway. Spinach can also increase the levels of nitric oxide which improves lipid homeostasis and increases the function of the endothelium as well as inducing an anti-hyperglycemic effect, by inhibiting the pancreatic enzyme a-amylase, intestinal a-glucosidase, and inhibiting the phosphatase protein tyrosine 1B present in the liver and skeletal muscle.

Spinach exerts an anti-inflammatory effect by reducing the process of lipid peroxidation and reducing the presence of an enzyme called cyclooxygenase and increasing the formation of endogenous antioxidants such as glutathione peroxidase, capitalize, and superoxide dismutase.  The effect of reducing the levels of cyclooxygenase is a subsequent reduction in the concentration of arachidonic acid, which is involved in inflammation.

Spinach contains large numbers of antioxidants; Oxidative stress is linked to the production of mutations in DNA as a consequence of free radicals which produce unusual bonds between the bases of DNA which favors the production of carcinogenic mutations.

Spinach also contains high levels of folates which are associated with a lower risk of cancer in healthy populations. The presence of lutein can also reduce the risk of developing colon cancer, particularly in younger patients. Moreover, spinach can reduce the risk of cancer of the mouth, larynx, pharynx, suffer guess, and stomach. Other compounds in spinach have been linked to anti-cancer effects against specific types of cancers such as ovarian, breast, lung, and cervical cancer.

The reduction of oxidative stress, due to its high concentration of vitamin K, folic acid, lutein, and β- carotene means that spinach can reduce the risk of the oxidative stress produced by aging, improving motor and cognitive skills, mental capacity, and short-term memory.

Moreover, spinach can block the activity of an enzyme called cholinesterase which is linked to the development of Alzheimer's disease. In addition, high levels of magnesium in spinach compensate for the low levels that are associated with chronic diseases such as hypertension, diabetes, cardiovascular disease, and Alzheimer's by reducing the level of neuron death caused by a peptide called β–amyloid.

Spinach has numerous functional compounds which act on several physiological systems including the cardiovascular system and the central nervous system. Due to the high levels of vitamin K, folic acid, β- carotene, and lutein, the consumption of spinach can reduce the risk of oxidative stress which is associated with aging, therefore, improving cognitive and motor skills as well as mental capacity.

Due to its high and hypocaloric effect which makes it is an ideal health food. Its antioxidant and health-promoting benefits are consequences of its high levels of vitamins vitamin C and fiber content, along with the presence of complex carbohydrates and low-fat levels, spinach is instrumental in helping to regulates blood glucose concentrations, reduced insulin needs via magnesium, and help weight control, generating an increase in satiety in patients with diabetes.

Hidaya is a science communications enthusiast who has recently graduated and is embarking on a career in the science and medical copywriting. She has a B.Sc. in Biochemistry from The University of Manchester. She is passionate about writing and is particularly interested in microbiology, immunology, and biochemistry.