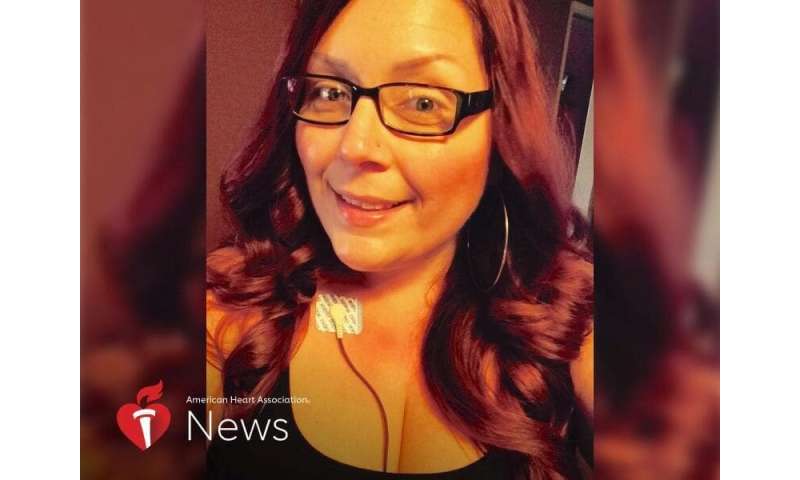 Kristen Criss’ father died of complications from a stroke, her mother died from a heart condition at age 40 and her sister passed away at 33.

Still, it would be many years—and health struggles of her own—before she realized the full meaning of having a family history of heart disease.

Criss discovered in 2017 that her mother died of the same heart disease that killed her sister: hypertrophic cardiomyopathy, or HCM. The disease occurs when heart muscle cells enlarge, causing the walls of the ventricles to thicken and possibly block blood flow. Although rare, it also is associated with sudden cardiac death.

A recent genetic test revealed that the 38-year-old from Riverside, California, also has HCM.

Starting in her 20s, however, Criss had developed a series of arrhythmias, or irregular heartbeats caused by electrical malfunctions in the heart that can lead to serious health problems. Later, she found out that arrhythmias can be a symptom of HCM.

After her heart was shocked back into a normal rhythm eight times while pregnant with her third child in 2016, Criss wanted to know the exact cause of her own mother’s death.

“After I had my daughter, my mind frame totally changed,” she said. “I thought I should know to benefit or share with others.”

So, in November 2017, Criss requested her mother’s death certificate from 1995, learning that her mother died of HCM. The condition is usually inherited and caused by a genetic mutation, but it also can mimic heart muscle changes associated with other conditions, such as high blood pressure.

“I was shocked and hysterical,” Criss said. “I fell to the floor. Now, I had to do something.”

The next month, genetic testing showed Criss also has HCM.

In February 2018, Criss received an implantable cardioverter defibrillator because of a high risk of cardiac arrest due to HCM. The small, battery-operated device placed under the skin to shock the heart back into a normal rhythm if it starts to beat chaotically. By her side were her husband, Dominque, and best friend, Melanie Taylor.

Knowledge has helped Criss make sense of the past, but it also sparked fear for her three young children. Did they have HCM? Would they pass it on to their children?

The results showed all three children tested negative for the genetic mutation behind HCM.

“It was very emotional,” said Criss, who treated the kids to ice cream to celebrate.

If Criss’ children don’t have the same genetic mutation, they’re unlikely to have HCM or pass it on to their children, said Dr. Maged Nageh, Criss’ cardiac electrophysiologist at Kaiser Permanente’s Regional Arrhythmia Center in Los Angeles. He stresses the importance of genetic testing for HCM patients with unclear family history or symptoms related to HCM.

Guidelines from the American Heart Association and American College of Cardiology recommend genetic testing to identify patients with HCM, including those with atypical presentation or if another genetic condition is suspected as the cause, as well as parents, children and siblings of those patients.

Criss has shared much of her experience on Instagram and Facebook to make others aware of heart disease and genetic testing.