Digital radiography is filmless, and allows immediate acquisition, deletion, editing and transfer of films to a computer system which generates the image almost at once.

With respect to physical principles, there is not much difference between digital and film radiography. Instead of using film to both detect and store image data, digital radiography uses digital detectors to produce a digital image, which is then stored separately on a digital medium. There are 4 steps in digital radiography: image generation, processing, archiving, and presentation. 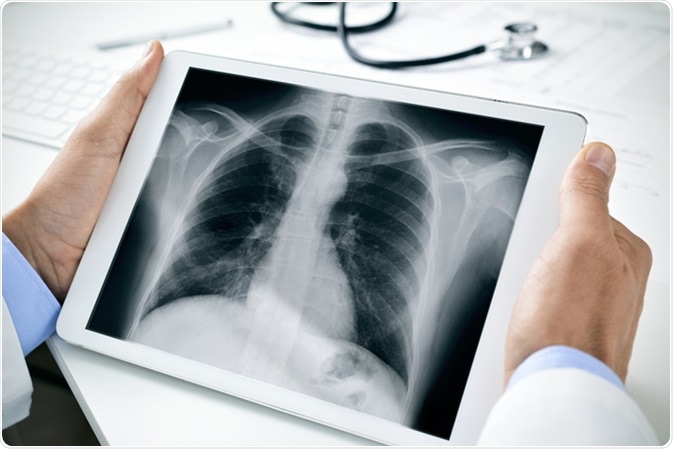 Digital detection is based on the conversion of absorbed X-ray energy into electrical charge, which must then be represented digitally in grayscale images to show the quantified X-ray energy that was absorbed at each point in the digital image. The final image is produced using processing software. The purpose of image processing is to improve image quality by reducing noise, eliminating artifacts, and enhancing contrast if necessary.

Final images are stored digitally on storage media for viewing on a computer. While being viewed, the images may be zoomed, measured, for distance and angle, panned or windowed. Images can be sent to other computers for remote viewing, or linked to digital record systems for improved retrieval and diagnosis.

The basic principle, therefore, is to detect  X-rays, then convert the X-rays to charge directly or indirectly (via conversion to light as the first step by phosphors or scintillators). These images are processed and viewed digitally. The process takes 10 seconds or less, and requires no cassette.

Indirect conversion flat panel detectors have three layers. The most superficial layer is comprised of cesium or gadolinium, scintillators (phosphors) that are used to convert incident X-rays to visible light. The middle layer consists of amorphous silicon photodiode detectors, and the final layer is made of thin film transistor (TFT) arrays.

The TFT arrays are as large as the area that is to be imaged. The function of the TFTs is to amplify the electrical signal produced by the conversion of light from the photodiodes, and to store it in the form of an electrical charge. When a high potential difference is applied to the TFT, it releases the charge. The rows of detectors in the transistor are individually connected to the potential that activates the charge. The row-by-row application of the potential allows the signal detection to indicate the location of the originating pixel based on its timing.

The light produced in this reaction is then converted to charge, hence the term indirect conversion.

Direct conversion flat panel detectors function by the use of a light-conductive material, usually selenium, which is coated on a TFT array that accumulates and stores electrical charge. The outermost layer is composed of electrodes which have high voltage bias. These detectors have better spatial resolution and the radiation dosage is lower compared to conventional X-rays. Furthermore, neither under-exposure or overexposure are crucial to image quality.

Another type of detector used in direct digital radiography is the CCD. These indirect conversion flat panel detectors are light-sensitive sensors like those used in cameras. The issue with these devices is their size limitation, to about 5 cm2. These are also combined with a phosphor to convert X-rays to light, which can then be focused on the CCD to be converted to electrical charge. The resulting data passes to a TFT array to be read out.

A major advantage of digital radiography is extremely high image quality. Digital radiography is generally used in facilities that have a very high patient imaging workflow. The speed of processing and diagnosis is enormously increased as well. Moreover, remote viewing is possible, and images can also be stored digitally for the patient to take elsewhere if desired.

X-ray detector systems are described in terms of efficiency by how well they detect photons and how much noise is added to the signal that is detected. This is measured by the detective quantum efficiency, or DQE. A DQE of 100% means that every X-ray photon has been detected and that there is zero noise. A digital radiography system can achieve DQEs as high as 65% compared with the 30% that is more typical of computerized radiography. The practical advantage is the ability to use lower doses of radiation without increasing the quantum noise.

The downside of digital radiography is its cost, as 2 separate detector plates will be required, one for each Bucky position. These detectors are extremely expensive. Moreover, they cannot be positioned for imaging at awkward angles. As a result, new designs have been developed to increase the flexibility of this technique.

Other important issues are the need for high luminance and monitors with high resolution to view final digital images, and the need to arrange large volumes of digital storage on appropriate media. Digital radiography is also completely dependent on having a picture archiving and communication systems (PACS) with a high bandwidth so that these high-resolution images can be archived.