First results from a clinical trial of a procedure to open obstructed airways in patients with chronic obstructive pulmonary disease (COPD) have shown that it significantly reduces problems associated with the disease and is safe.

“We have been able to significantly reduce chronic respiratory symptoms such as shortness of breath, exacerbations of the disease, infections and hospitalisations in a group of COPD patients who are already on aggressive medical therapy. There was also a trend towards improved quality of life and better lung function in the treated patients. This has important implications for patient quality of life, and also healthcare costs, as these are events that have a significant impact on the cost of caring for these patients,” he said.

TLD involves passing a special catheter through an instrument called a bronchoscope into the lungs. The bronchoscope allows doctors to see the inside of a patient’s airways and to use the catheter to deliver a type of electrical charge called radiofrequency energy to the nerves on the outside of the airways, interrupting their normal function. This causes the airways to relax and widen, decreases mucus production and decreases airway wall inflammation. Then the catheter and bronchoscope are removed.

The AIRFLOW 2 clinical trial is taking place in several centres in six European countries. Patients are randomised to receive either TLD or a sham procedure under general anaesthetic. The sham procedure still involves inserting the bronchoscope and catheter, but the radiofrequency electrical change is not delivered. This is performed under “double-blind” conditions, in which the treatment team that is carrying out the procedure knows whether the patient is assigned to the active treatment or the sham, but the follow-up team who sees the patient for post-procedure visits and tests does not, and nor does the patient. 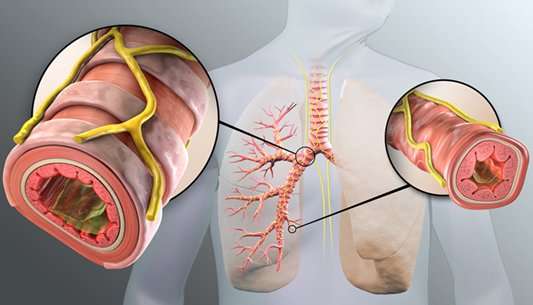 TLD targets a well-known pathway involved in the development of COPD, called the cholinergic pathway, which regulates the body’s inflammatory responses to injury and promotes smooth muscle constriction of the airways. Anti-cholinergic drugs, which are often used to treat COPD, also target this pathway, but when they are combined with TLD there appears to be an additional, beneficial effect, even in patients who are being heavily treated with other drugs. Patients in both parts of the trial received tiotropium, an anti-cholinergic bronchodilator.

Dr. Slebos presented results from 82 patients in the trial at the ERS Congress today. Half of them were male and they had an average age of nearly 64 years. Three to six months after the treatment, 71% of patients who had received the sham treatment had an adverse respiratory event related to COPD compared to 32% of patients who received the TLD treatment.

“Furthermore, the positive benefit has continued in those receiving TLD treatment, with the number of patients hospitalised for respiratory complications in the first year reduced by more than half in the treatment arm versus the sham arm,” said Dr. Slebos.

None of the patients died and there were no TLD-related adverse side effects that needed to be treated. Five patients (12%) who received the TLD treatment experienced stomach problems such as nausea, abdominal bloating and digestion discomfort, but these were temporary symptoms that had gone after six months.

“These occurred because of the radiofrequency energy affecting the nerves lining the nearby gullet,” said Dr. Slebos. “We are improving our process and imaging in order to better understand where these gastric nerves are, and we have implemented additional measures to improve our ability to avoid them in future procedures.” 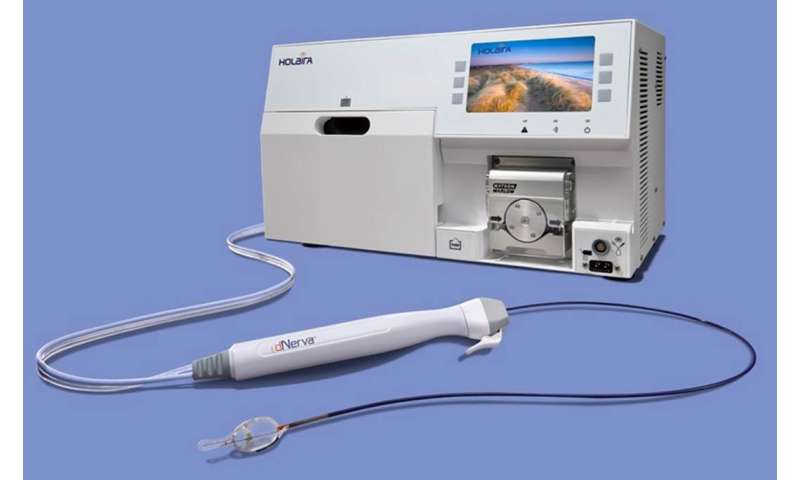 A larger, phase III trial, AIRFLOW 3, is now being planned. It is likely to be launched in carefully chosen centres of excellence in Europe, beginning some time next year.

Dr. Slebos said: “The results I am presenting today suggest that TLD can be an additional treatment option for COPD patients who are already receiving the optimum drug treatment for their symptoms. It offers the ability to significantly reduce symptoms and exacerbations even in patients already on aggressive medical therapy.

“With the addition of AIRFLOW-3, which will have a similar design but will include many more patients, there will be a profound amount of evidence for the procedure, gathered in a highly scientifically rigorous manner.”

Over 300 million people worldwide suffer from COPD, including 4-10% of adults in European countries. TLD is a relatively new approach to treating the disease, which has been under investigation since 2008, with four clinical trials in the last six years (IPS-I, IPS-II, AIRFLOW-1 and AIRFLOW-2). “The clinical need for more effective therapies is great,” said Dr. Slebos.

“After proving safety and feasibility in earlier trials, we felt a double-blind, randomised, sham-controlled trial would be an important scientific control to demonstrate the effectiveness of the treatment.”