Complications of the third stage of labor

The third stage of labor is an unpredictable time. It ought to be a period of rest and rejoicing after the birth of the baby if all has gone well so far, but in thousands of women it can become very dangerous. 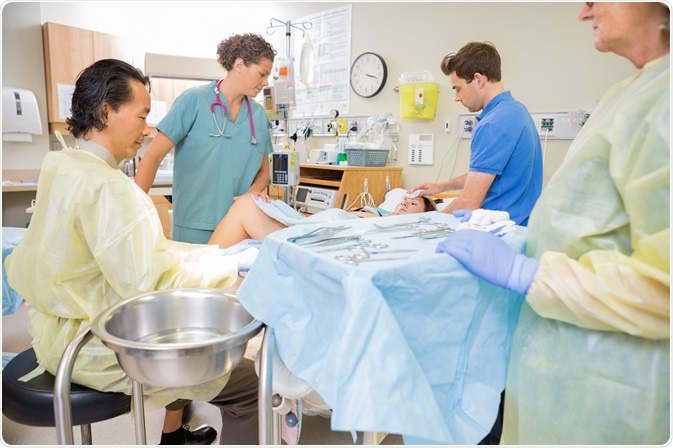 The conditions which often complicate the smooth course of the third stage include the following:

When the third stage of labor is prolonged beyond 20-24 minutes (as opposed to the 30 minutes that was the earlier benchmark), it may be a risk factor for postpartum hemorrhage (PPH) which kills more than 1.25 million women a year.

Even when it doesn’t take maternal life, it causes excessive blood loss (over half a liter of blood) following childbirth in a staggering 14 million cases.  Most of this bleeding comes from the placental site, which fails to contract properly.

Typically, natural figure-of-8 muscular fiber loops are present around the blood vessels, so that the torn vessels are quickly closed off after the placenta separates and the uterus contracts. PPH is particularly deadly because two out of every three women who develop PPH had no preceding risk factors before delivery.

PPH may also be associated with the following conditions which are also associated with an abnormal third stage. An anemic mother is at higher risk of PPH because clotting is more difficult and because even a relatively small blood loss may precipitate signs and symptoms of hypovolemia due to the initial lack of blood.

The retention of part or the whole of the placenta, including the membranes, for over 30 minutes after the delivery of the baby, is called retained placenta. It has several causes:

The last three conditions may also lead to uterine atony resulting in PPH, because the uterus cannot contract well with the placenta inside it.

In some women, the uterus doesn’t contract strongly enough to separate or expel the placenta completely. As mentioned above, a flabby uterus may be associated with a retained placenta, but also with conditions such as:

This is a rare but very serious complication of the third stage, slightly more common with controlled cord traction, in which the uterus is turned inside out and comes out through the vulval orifice wholly or partly.

To avoid this, a non-separated placenta should never be pulled out using this technique. Fundal support is also taught as a method of preventing uterine inversion, but not enough evidence exists as to its usefulness. Risk factors for uterine inversion include: