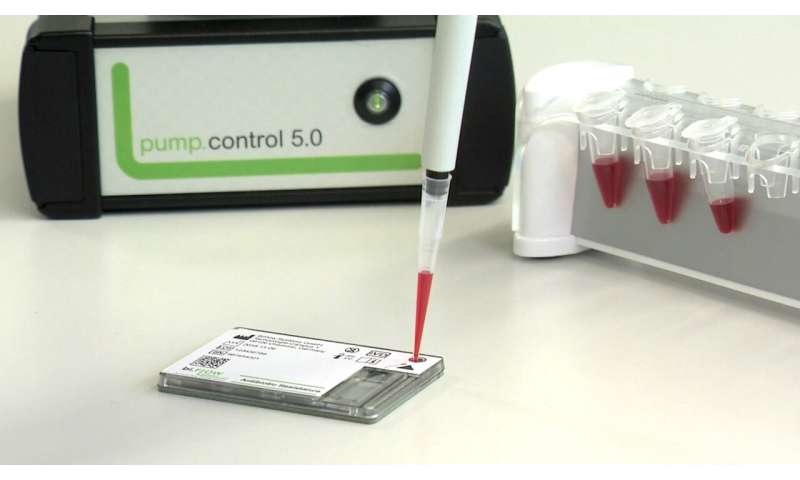 People with type 2 diabetes often suffer from poorly-healing infected wounds on their feet. Using existing methods, however, it takes two days to grow a bacterial culture used to identify the pathogens infecting the wound and their antibiotic resistance—and thus to find an effective antibiotic. With the help of a new rapid test developed by Fraunhofer researchers, it will take just one hour to obtain this information in the future.

Almost 1000 people are diagnosed with diabetes every day in Germany—more than 90 percent of them have type 2 diabetes. And the number of people developing the condition is rising both in Europe and worldwide. Type 2 diabetes can lead to numerous comorbidities, including hyperglycemia-induced damage to nerve cells. Affected patients lose feeling in their extremities and often develop skin ulcers that take a long time to heal, if at all. These wounds frequently become infected with various pathogens. Accordingly, doctors usually treat them with antibiotics. The problem is that not every antibiotic works against every pathogen, and antibiotic resistance is becoming more common. For this reason, doctors take a swab of the wound and arrange for a bacterial culture to be grown in the laboratory. This provides information about the type of pathogens and the antibiotics they are resistant to. However, it takes two days before the results are ready. This is particularly critical in places such as India, where the journey to the nearest hospital can be very long and outpatient treatment—as it usually is—can often only be adjusted to the results after several weeks have passed. More-over, treatment with broad-spectrum or ineffective antibiotics runs the risk of spreading antibiotic resistance even further.

One hour instead of two days

A new type of rapid test enables doctors to use the right antibiotic from the beginning. It was developed in the MIDARDI project, funded by the BMBF and IGSTC, by researchers from the Fraunhofer Institutes for Cell Therapy and Immunology, Department of Bioanalytics and Bioprocesses IZI-BB (Potsdam), and for Electronic Nano Systems ENAS (Chemnitz) together with the company BiFlow Systems GmbH and partners in India. “With our rapid test, it’s possible to determine within one hour which bacteria have infected the wound and what antibiotic resistance they have—allowing doctors to choose suitable antibiotics right from the start of the treatment,” says Dr. Harald Peter, Group Leader at Fraunhofer IZI-BB.

Instead of culturing bacteria in the lab and observing how they react to various antibiotics, the rapid test analyzes the DNA of the bacteria. The doctor takes a swab of the wound and puts the wound fluid on the input area of the roughly smartphone-sized cartridge. On the inside, the bacteria are extracted, and their DNA is exposed and dissected. A biosensor built into the cartridge contains special capture molecules, which form the matching counterparts to the DNA strands of the bacteria and the mutated DNA that causes defined resistance. If a strand of DNA matches a certain capture molecule, it binds to it, while the DNA strands on all other capture molecules are removed in a rinsing cycle. The illumination of the fluorescence-labeled bacterial DNA reveals what capture molecules the pathogen DNA has bonded to—and thus what pathogens they are and what kinds of resistance they have.

The team of researchers at Fraunhofer ENAS developed parts of the elaborate sample preparation of the DNA strands. “For example, we helped ensure that the DNA of the pathogens is digested into pieces of the right length and can thus bind to the immobilized capture molecules,” explains Andreas Morschhauser, Group Leader at Fraunhofer ENAS. BiFlow Systems GmbH provides the cartridge that both holds the biochip and executes the entire sample handling. Among other things, the company ensured that the fluids are moved as required through the chip—for example, by generating electrically controlled gas that inflates a membrane like a balloon, thus pumping the fluid on further through the system. Colleagues from Fraunhofer IZI-BB designed the biochip. “On a space of 5×5 millimeters, we are able to—if required—accommodate up to 400 different capture molecule strands, at distances of less than a hundred micrometers,” says Dr. Peter.

Also suitable for other medical analyses