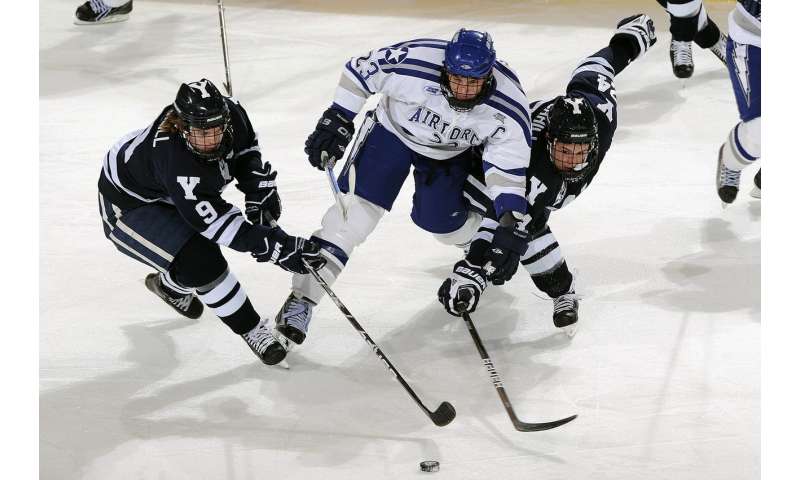 Eliminating bodychecking from non-elite bantam ice hockey leagues lowered injuries but didn’t do away with concussions, according to a University of Alberta concussion expert.

U of A educational psychology researcher Martin Mrazik, who participated in a study led by the University of Calgary’s sport injury prevention research team, said the research showed policy changes banning bodychecking in non-elite bantam hockey resulted in a 56 percent drop in injuries.

Part of that decline was a dip in the concussion incidence rate from 3.34 concussions per 1,000 hours of play in leagues that allowed body checking to 2.01 in leagues where the tactic was banned.

“We did see a decrease in concussions; however, the drop wasn’t statistically significant,” said Mrazik.

He explained that fluctuation falls within the ebbs and flows of the concussion incidence rate in any given year. In the NHL, for instance, the number of concussions per 100 players can range from 4.6 like it did in the 1998-99 season to 7.7 in 2000-01.

“You have this wiggle room, and that number wasn’t outside of that wiggle room,” Mrazik said.

Previous studies from this research group found peewee hockey players incurred three times more injuries in leagues where they were allowed to bodycheck. They led to a complete ban of bodychecking in peewee in 2013 by Hockey Canada. The same research also informed Hockey Edmonton’s 2016 decision to join a growing list of Alberta hockey associations eliminating body contact in all but the highest levels of bantam and midget leagues.

To help determine whether the policy decisions are leading to less injuries, bantam non-elite ice hockey players were recruited from leagues that allowed bodychecking and others where it was not allowed. The researchers had data from 49 bodychecking teams and 33 non-bodychecking teams.

Teams in the study agreed to log all game-related injuries that resulted in medical attention or an inability to complete a game or practice. Any player suspected of having a concussion was referred to a study physician for diagnosis and management.

Though the concussion rates didn’t drop as much as researchers had hoped, Mrazik noted that injury numbers did drop for the study years, as did dropout rates among kids playing bantam hockey, all of which he said can be at least partially attributed to the conversations taking place about concussions.

“There’s only so much injury you can remove from the game,” he said. “It wasn’t that long ago that concussions weren’t talked about. That’s changed and that’s a positive thing,” he said.