Worth the Wait: Cinnabun’s Story

Odette S. was browsing the ASPCA’s website last May for a cat to adopt, trying not to get her hopes up.

But Odette was in luck. When she spotted Cinnabun, a petite calico, she learned the cat was still available and being fostered in the office of an ASPCA employee.

Odette and her husband had recently lost their cat, a dilute calico named Fiona, whom they had adopted from an ASPCA mobile adoption vehicle 11 years earlier.

Now, over a decade later, Odette peered at the images of another young calico, whose green eyes peered back. 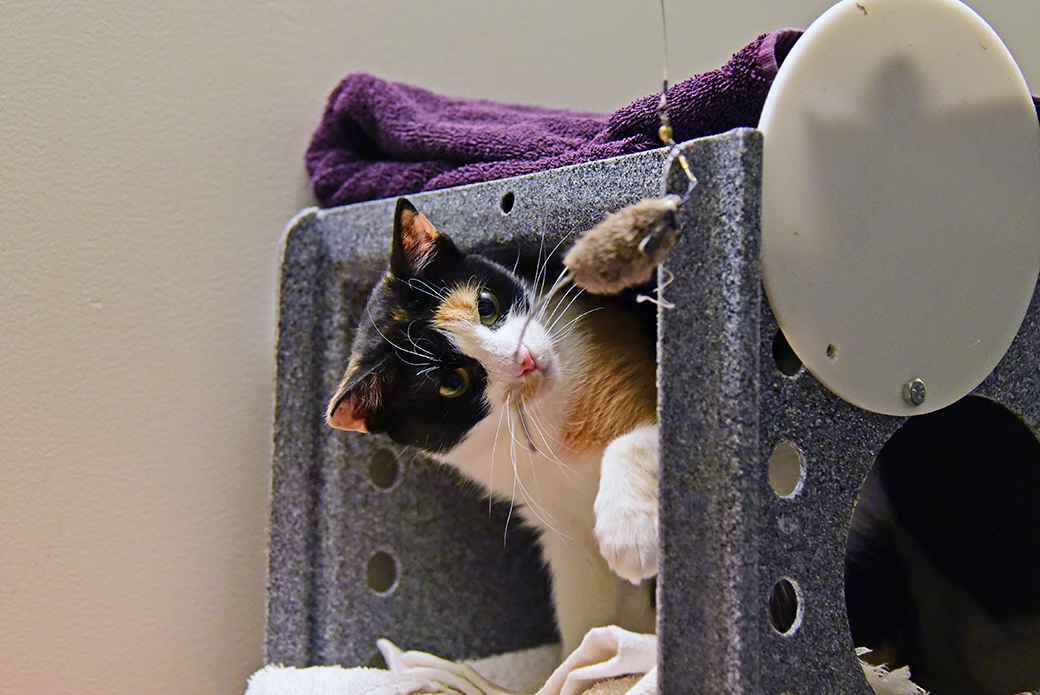 From Overcrowded Conditions to Her Own Home

In 2008, Cinnabun was one of three cats relinquished to the ASPCA by an overwhelmed pet owner. The animal transfer was arranged by the ASPCA’s New York City Community Engagement Team, which works with pet owners to identify obstacles that put pets at risk and, when necessary, will remove animals with their owner’s consent.

Following her surrender to the ASPCA, Cinnabun was cared for by the ASPCA’s Animal Recovery Center (ARC) team. Following her time in ARC, Cinnabun was fearful and demonstrated behaviors that suggested that she was severely under-socialized, traits that are commonly seen in animals who come from overcrowded homes. So she then spent time in the office of Erica Barbot, ARC’s Senior Operations Manager. 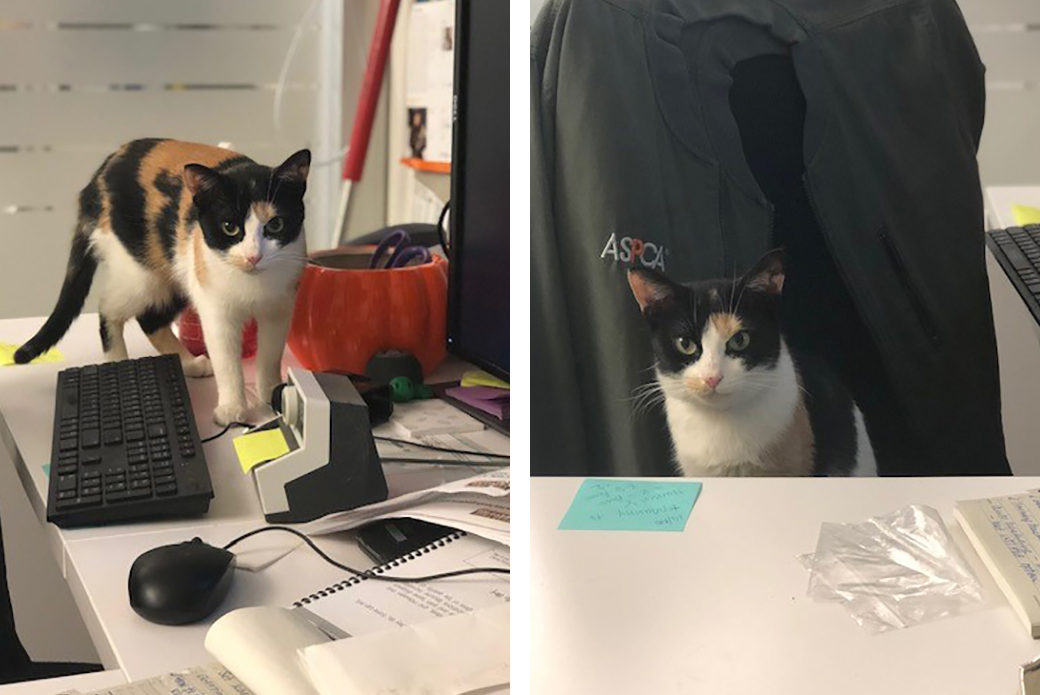 “Cinnabun and another cat from the same case were together in my office, but the other cat was more outgoing and started to bully Cinnabun, so we separated them,” Erica explains. “Cinnabun then started to come out of her shell and was very motivated by toys, especially pens, which she loved to fish out of containers.”

Eventually, Cinnabun began sidling up to Erica when they played on the floor. “She would even lie in my lap at times,” Erica says. “That was huge.”

In March, Cinnabun was adopted but eventually returned due to her incompatibility with the resident cat. MaryLyn Carabello, ASPCA Legal Senior Director and Staff Attorney, stepped in to foster Cinnabun upon her return. 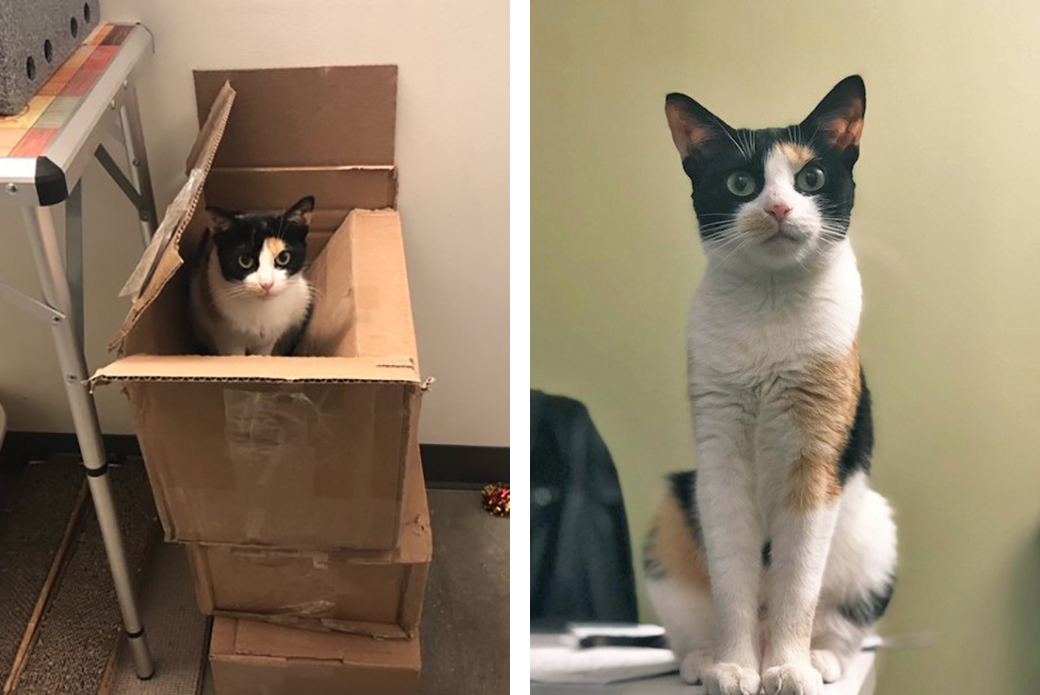 On May 23, Odette and her husband, John, met and adopted Cinnabun after MaryLyn showed them a short video of Cinnabun interacting with an ASPCA behaviorist.

“In the video, the behaviorist was able to pet her,” Odette recalls. “It showed that she could tolerate being touched. That really was a saving grace and one of the reasons we decided to adopt her and stick it through.”

Since her adoption, Cinnabun—now Cinnamon, although Odette and John sometimes call her Bunny—is gaining confidence, though more slowly than expected. But by no means are Odette and John giving up on her.

“We know at some point she should come around,”, says Odette, who notes that, as she and John anticipated, Cinnamon hid under the couch the entirety of her first week. 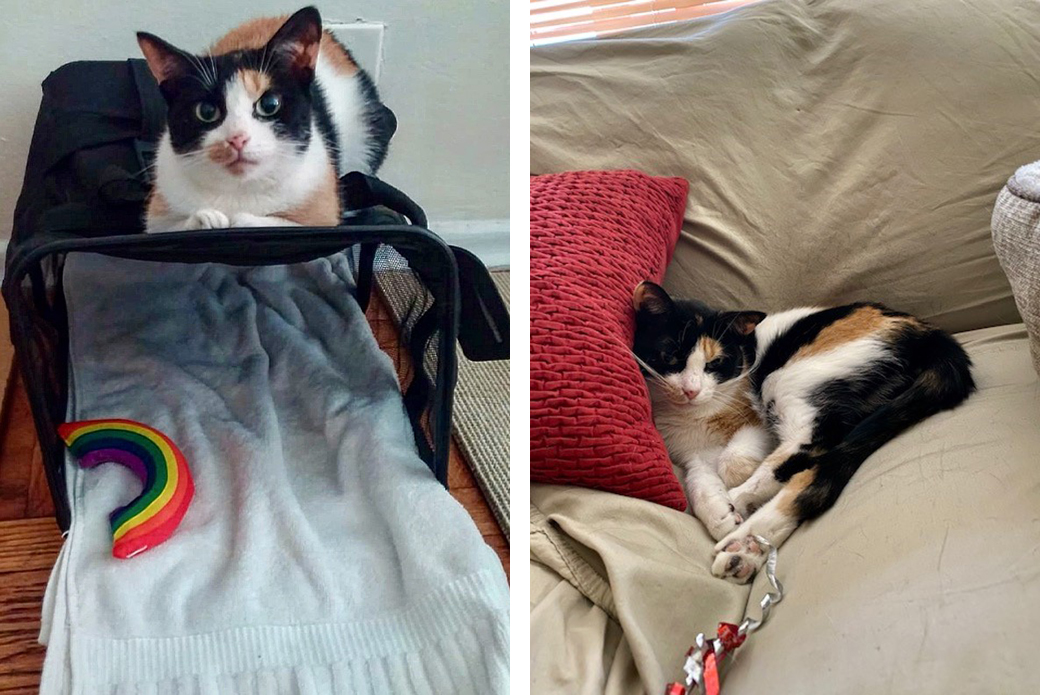 “It took more than four months for her to move to the living room and start hanging out with us,” adds Odette.

“Genetics and how much cats are socialized and handled during the critical period from three weeks to three months of age can determine how social and well-adjusted they will be when they’re older,” says Marny Nofi, ASPCA Senior Manager of Behavior who worked with Cinnamon along with Samantha Nigbur, an Animal Behavior Counselor.

Marny adds that adult cats can learn to accept people and handling, but as Odette and John experienced, the process may be slower. “Being patient and using something the cat likes (playtime, a favorite treat or toys) will help her learn a new way to respond to fearful stimuli,” she says. 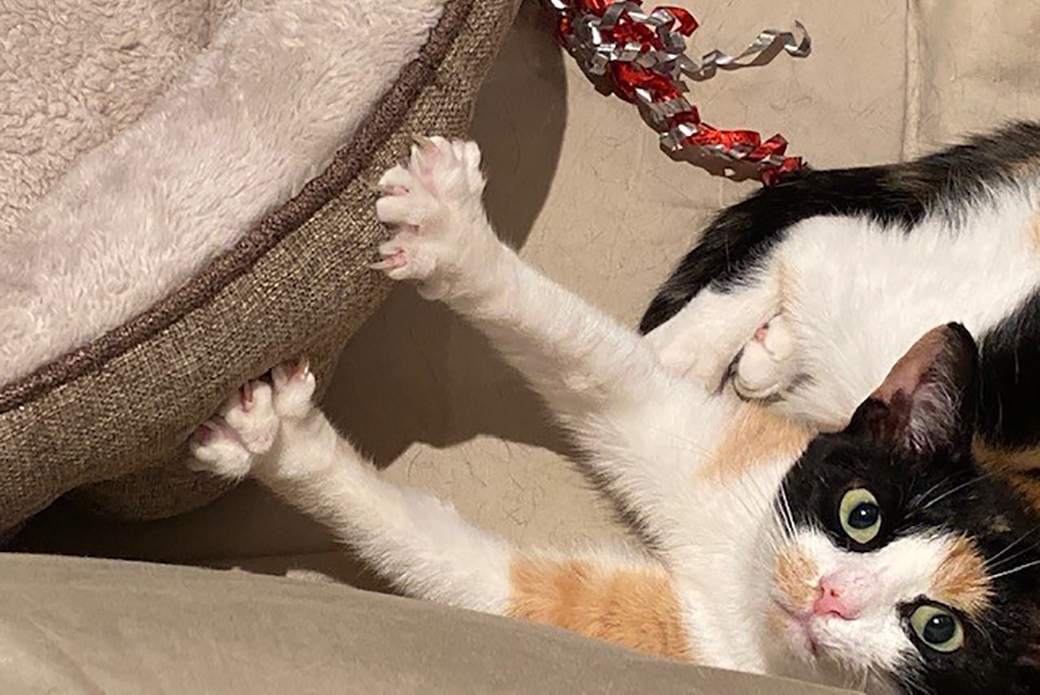 Odette and John’s patience and realistic expectations have helped Cinnamon acclimate at her own pace.

“We approach her very carefully so she doesn’t run away from us,” says Odette, a researcher who works from home. “What breaks my heart sometimes is that Cinnamon so wants to interact. She meows when she wants attention, and she’ll rub against my ankle and come to us when she’s hungry. With visitors, she’ll go within a few feet of them and sniff them if she’s interested. She really does want that connection.”

But fortunately, Cinnamon’s shyness has done nothing to diminish her playfulness. 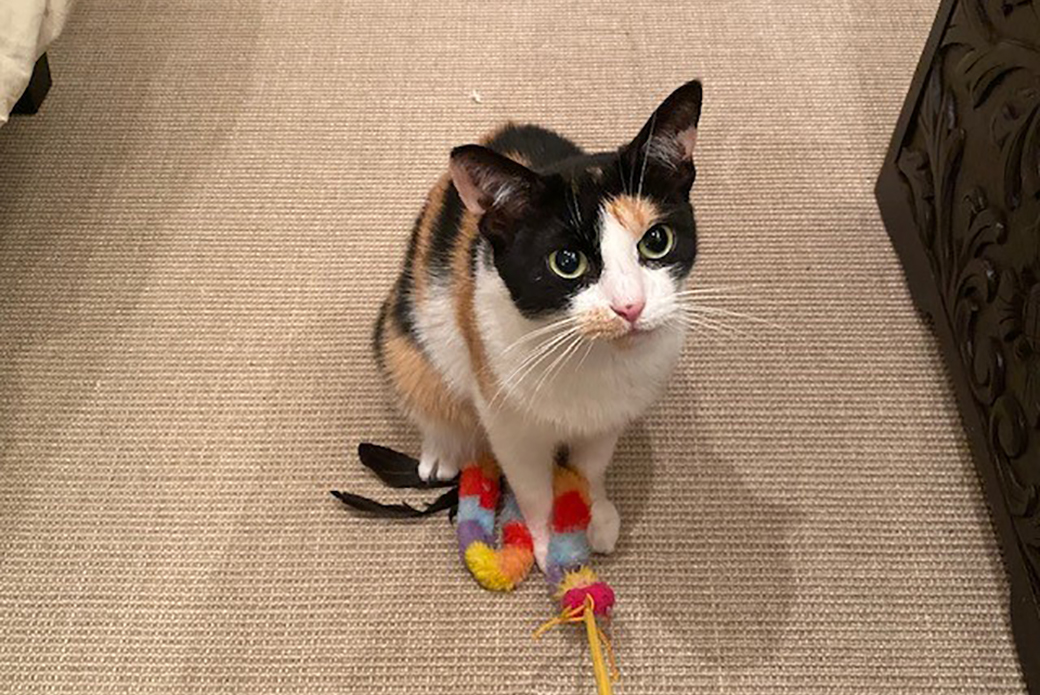 “She’s the most playful cat I’ve ever known, and she likes attention while she’s playing,” explains Odette, who, like Erica did, sits on the floor so she can inch closer to Cinnamon during playtime. “She likes wands as well as ribbon toys. She also adores foliage and can usually be spotted lying next to or behind potted plants.”

Cinnamon’s progress is slow, but steady, and Odette and John celebrate every development. 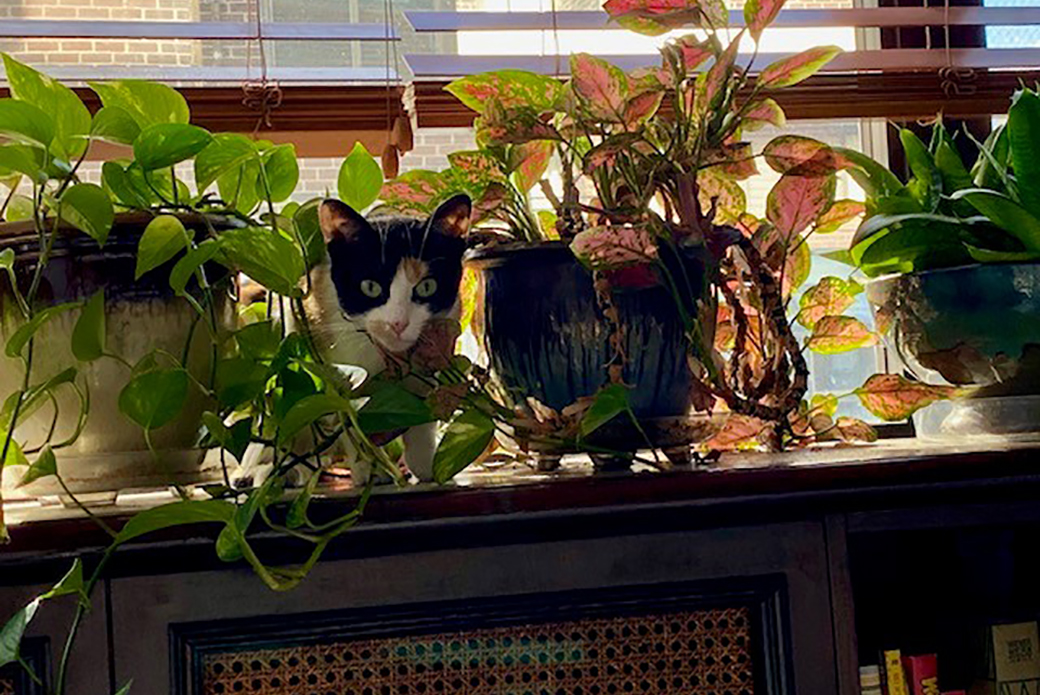 “Around the first week of September she started to sit next to me when I was on the couch—not too close, but within 18 inches. That was a gift!” Odette says with joy. “You just have to be patient…and open.”