Black sheep: Why some strains of the Epstein-Barr virus cause cancer 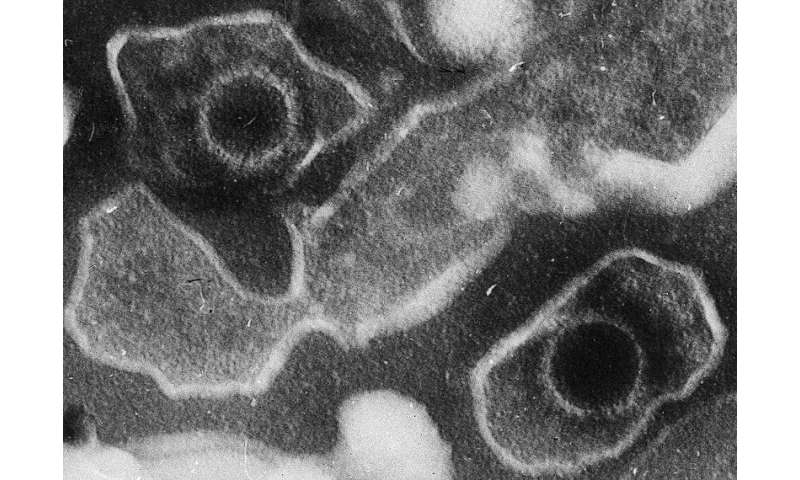 The Epstein-Barr virus (EBV) is very widespread. More than 90 percent of the world’s population is infected, with varying consequences. Although the infection does not usually affect people, in some, it can cause glandular fever or various types of cancer. Researchers at the German Cancer Research Center (DKFZ) have now discovered why different virus strains cause very divergent courses of disease.

More than 90 percent of all people become infected with the Epstein-Barr virus (EBV) during their lifetime. The infection usually remains undetected. However, the virus can also cause diseases—with regional differences: Glandular fever (infectious mononucleosis) primarily occurs in Europe and North America, and normally affects adolescents or young adults. In equatorial Africa, Burkitt lymphoma is associated with EBV infection. And in Taiwan, southern China and Southeast Asia, the virus often causes nasopharyngeal carcinomas, cancers of the nose and throat area. This is one of the most common types of cancer in young adults in these countries.

“Nasopharyngeal carcinomas are sometimes seen here too, but really very rarely,” commented Henri-Jacques Delecluse from DKFZ. So how does EBV cause completely different diseases in different parts of the world?

“One possible explanation is that different types of virus are responsible,” Delecluse explained. “And we have now found evidence of precisely that.” The DKFZ researchers are publishing their results in the journal Nature Microbiology.

In the laboratory, Delecluse and his team studied a virus strain that had previously been isolated from a nasopharyngeal carcinoma. M81, as this particular type of virus is called, has certain peculiarities. The researchers had previously discovered that M81 infects not only the immune system’s B cells, but also epithelial cells of the nasal mucous membrane very efficiently. In contrast, virus strains that cause glandular fever in Europe almost only infect B cells. And although the virus strains that are common there cause the infected B cells to multiply in a Petri dish, they do not produce any new virus particles, unlike M81.

As the DKFZ researchers discovered, one of the reasons for this different behavior is a genetic element called EBER2, of which there are many variations. EBER2 is what is called a non-coding RNA (ncRNA), in other words, a piece of RNA that does not contain a blueprint for protein molecules. M81 has an EBER2 variant that is particularly often found in EBV strains from nasopharyngeal carcinomas.

To find out how this variant affects the behavior of the virus, the DKFZ researchers used molecular biology tools to extract EBER2 from the M81 genome. “The virus was, indeed, no longer able to multiply in the infected cells,” Delecluse noted. Even when an EBER2 element from a virus strain that is widespread in Europe was inserted into the M81 virus, it was no longer able to produce virus particles.

The researchers also discovered how EBER2 helps M81 multiply. “EBER2 from M81 stimulates the production of CXCL8, a cytokine that plays an important role in inflammation and carcinogenesis,” Delecluse explained, adding that this was not only true of the infected cells themselves. “The EBER2 RNA is wrapped in little envelopes in the infected cell and transported to neighboring cells, which then also begin to produce CXCL8,” he continued, explaining that this ultimately stimulated the virus to produce offspring.