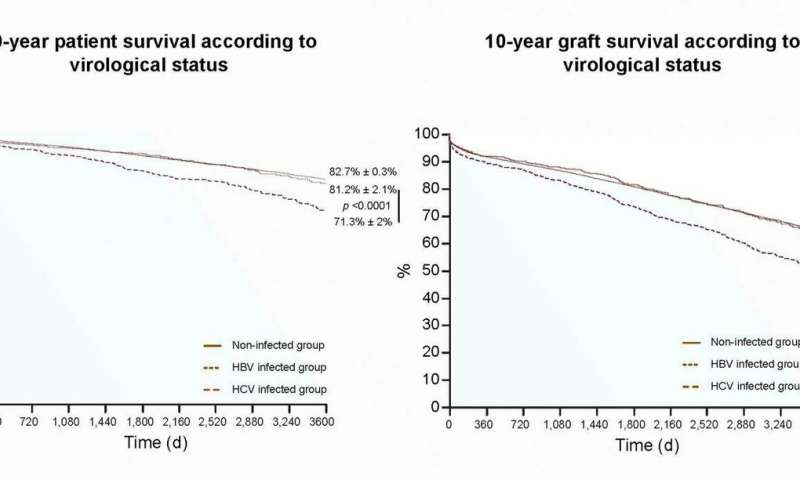 Prior to the development of antiviral therapy, kidney transplant recipients infected with either hepatitis B (HBV) or hepatitis C (HCV) experienced poor outcomes. In a new study in the Journal of Hepatology, researchers report favorable 10-year survival rates for patients with HBV and/or HCV treated with antiviral agents and advise that antiviral therapy should be systematically offered to all HBV and HCV patients in line with international recommendations.

Renal transplantation is currently the best treatment for patients with end-stage renal disease (ESRD) because it significantly improves survival compared to patients who remain on hemodialysis. Since the 1990s, antiviral therapy using nucleos(t)ide analogues like adefovir, lamivudine, tenofovir, and entecavir, has benefited HBV-infected patients by preventing viral replication in infected cells. Interferon-based therapy has been rarely used in HCV-infected patients because it increases the risk of transplant rejection. Although the prevalence of HBV and HCV infection in patients with ESRD has significantly declined over time, it remains at least four times higher than in the general population.

In the second step of this study, a random analysis of the medical records of 184 HBV and 504 HCV patients showed a control of viral replication in 94 percent and 35 percent of cases, respectively. For each kidney transplant recipient with HCV with detectable or undetectable HCV RNA, researchers randomly selected one to four matched controls from the 29,797 non-infected patients using the following matching criteria: gender, age, duration of dialysis, duration of cold ischemia, and year of transplantation. This analysis provided evidence that HBV chronic infection, which previously had a negative impact on patient and survival in kidney transplant patients, no longer influences patient or graft survival due to the control of viral replication related to the extensive use of nucleos(t)ide analogues. In contrast, HCV chronic infection still negatively impacts 10-year patient and graft survival. However, HCV’s negative influence is counteracted by sustained viral suppression, since it is no longer observed in kidney transplant recipients with undetectable HCV RNA.