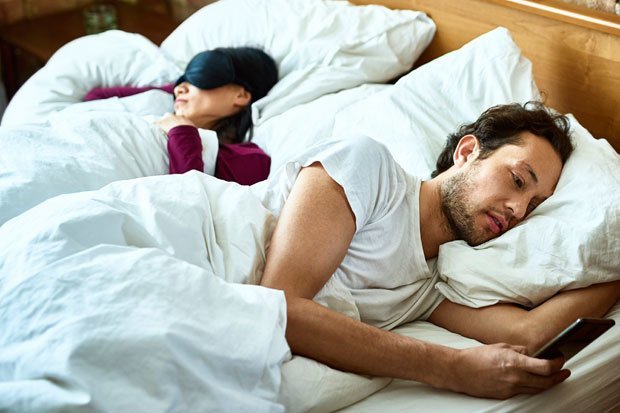 They say that trust is the most important thing in a relationship – but a new study suggests it is sorely lacking from a growing number of UK relationships.

A survey of 2,000 Brits discovered one in three admitted to snooping on their partners phones and social media accounts in search of evidence of infidelity.

And a shocking one in five men admitted to waiting until their partner was asleep to use their fingerprint to unlock their phone.

Far from being a one off thing, four in 10 people copped to spying on their partners at least once a week.

The findings come as family lawyers Hodge Jones & Allen report an increase in information found on phones and social media being cited in divorce proceedings.

Dr Martin Graff expert in cyber psychology from the University of South Wales explained the trend: “Technology means that there are far more ways to snoop now than there were before.”

“Social media has also created a world where people might be encouraged to search out information on their romantic partners having maybe seen them in some ambiguous situation – tagged in a post, for example – with someone else, motivating them to search for more information.”

The research found that more than half of those who snooped on their partner discovered something that led them to believe they had cheated, with 45% of them deciding to end the relationship as a result.

However, participants failed to agree on how to define cheating, with almost six in 10 indicating that sexting should be considered as such.

“In a world where our lives are increasingly lived online, checking a partner’s phone, email or social media without their permission is surprisingly common,” said Denise Knowles, a counsellor at relationship support charity, Relate.

“It’s understandably tempting, but this doesn’t make it okay,” she added.

Jacqueline Major, head of family law at Hodge Jones & Allen warned that there could also be consequences if nothing is uncovered, saying: “If you do find evidence of inappropriate behaviour, this could be used as grounds of unreasonable behaviour in a divorce, but if you do not and your partner found out that you were looking through their phone that could be used against you as unreasonable behaviour, and it proves your trust in your partner has gone.”

Family Health
We and our partners use cookies on this site to improve our service, perform analytics, personalize advertising, measure advertising performance, and remember website preferences.Ok